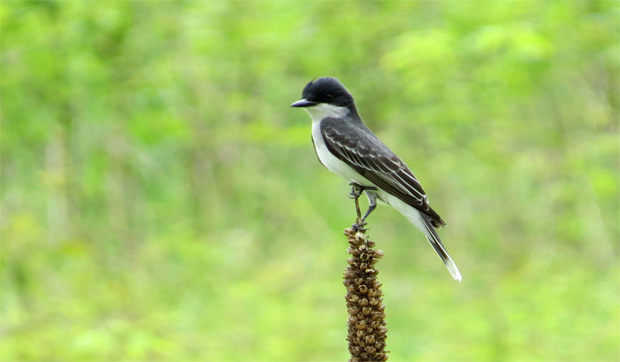 The eastern kingbird, Tyrannus tyrannus, gets its scientific name from its tyrant-like approach to territory defense, which can include defensive strikes at squirrels, crows and even hawks.

Good Natured: What’s In a Name? As It Turns Out, Plenty!

I’ve been in a literature sort of mood recently, and have come to realize that, golly, when Juliet asked the question “What’s in a name?” she sure opened up a can of worms.

If I had to guess what kind, I’d go with Lumbricus terrestris, an animal we know as the Canadian nightcrawler, but actually is European in origin. It In fact, depending on where in the world people are talking about them, the squiggly critters also can be called common earthworms, lobworms and dew worms.

But I digress. The point is, Juliet may have tried to trivialize names. But as she learned, and we all have come to know, they actually are pretty important—especially when it’s time to identify a species.

Taxonomists–those scientists who group plants and animals by characteristics and then apply an appropriate scientific name–are perhaps the supreme namers, if such a title exists. And even though the thought of adding Latin or Greek words to our modern American vocabulary might sound at best complicated, and at worst, completely intimidating, it’s actually a great way to get to know some of our local flora and fauna.

(Oops, see? We started already. Flora comes from the Latin word for plant. And fauna comes directly from Fauna, a sister/wife/daughter, depending on source, of Faunus, the Roman god of forests and fields.)

At any rate, scientific names can at first seem at little overwhelming. But if you break them down into their parts, they become absolutely fascinating. Some of my personal favorites are Mephitis mephitis, which is Latin for Stinky stinky and denotes the striped skunk; Tyrannus tyrannus, the eastern kingbird, a natty flycatcher that gets a bit tyrannical during territory defense; and Vulpes vulpes, which doubles up on the Latin word for fox and is the scientific name for our locally common red fox.

(These pairings of identical names, by the way, have a name of their own. They’re known at tautonyms and, interestingly, are “allowed” in the naming of animals, but not plants.)

Oftentimes, an organism’s scientific name gives clues to the plant or animal’s appearance and/or life cycle. Lacunicambarus diogenes, for example, is a local species that also goes by the common names of devil crayfish and, in some southern locales, coffin cutter. Now, these monikers might lead you to believe that these guys are evil in some manner or even supernatural. But they’re really just large crawdads with hefty pincers exquisitely adapted for digging.

This species is one of three types of burrowing crayfish that can be found in our area. The genus name, Lacunicambarus, is a combination of two Latin words: lacuna, which means cavity or pit, and the gammarus, which means lobster. The second, or species, name, meanwhile, references Diogenes, the Greek philosopher who lived in a tub.

If you could stick a camera down a diogenes’ hole, you’d see it reaches down to the water table; there the crayfish whiles away the daylight hours before coming out at night to forage.

Let’s take a look at another example. Lampropeltis triangulum is the name for the milksnake, of which there are 20-some different subspecies. Our local representative is L. t. triangulum, the eastern milksnake. While the common name lets us know that the subspecies lives in the east, the scientific name tells us that the snake has smooth, shiny scales (Lampro = shiny, peltis = shield) and a three-pointed marking on its head (tri = three, angulum = angle or corner).

Yet animals don’t have an exclusive on fun names. Plants have their share too. Buttercups, for example, belong to the genus Ranunculus, which means little frog. The plants often are found near wet areas just like, you guessed it, little frogs. Columbines belong to the genus Aquilegia, from the Latin aquila, or eagle, due to the way the hooks on the petals look like talons. And the purple coneflower genus, Echinacea, has its roots in the Greek work ekinos, or hedgehog—an animal the spiky seed heads resemble.

Even though it’s a pernicious invasive, the scientific name of European buckthorn has some interesting etymology as well. Its genus name Rhamnus is Latin for thorn bush while cathartica refers to the, um, cathartic or cleansing action of the plant’s berries. Mildly toxic, they produce a purgative effect on the digestive tracts of any mammal that eats them—a consequence that has no doubt contributed to the plant’s pervasiveness.

We could go on looking at the fun taxonomists have had naming the 8.7 million or so species that inhabit our great planet. But that would take a lot of time, and a lot of space, either cyber or on paper. What I’d like to do instead is continue this train of thought next week, and explore some of the odd turns taxonomists have taken in their quest to provide accurate scientific names for all of us wise beings…creatures the taxonomists call Homo sapiens.