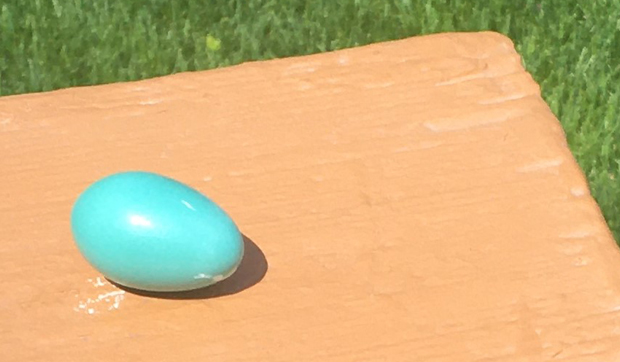 Photo Caption: A common grackle is the most likely suspect in the movement of this egg from its nest to a local deck railing. The egg later was consumed. Photo courtesy of Christine Welch.

Ah, spring. What could be more glorious? Flowers are blooming, insects are buzzing, frogs are calling. And the birds? Well they’re doing what birds do best. They’re looking good in their breeding-season plumage; singing, of course, to declare their territories; and building their nests.

I know. Not exactly the kind of image you want to conjure in spring-the time of year when we joyfully welcome back the feathered friends we’ve missed so much over the past few months. After seemingly endless cold and snow, we like to view these months as a time of rebirth, fresh starts, new beginnings. And they are, for sure. But what amounts to gains for one species sometimes comes about as a result of losses for another.

I was thinking about this juxtaposition just the other morning, as I sat on my deck listening to Papa House Wren unleash his repertoire of burbling trills. That famous and fabulous song, repeated up to 11 times a minute, along with the capacity to consume thousands of insects over the course of the breeding season, makes Troglodytes aedon one of the most sought-after backyard birds in all of suburbia.

These dazzling performances, however, belie a trait that makes house wrens the bane of other birds nesting nearby. Presumably in the interest of ensuring the best of the best for their own young, wrens have a habit of literally poking holes in the competition. Well, their eggs anyway. Other cavity nesters like chickadees, bluebirds and purple martins are frequent targets of this treatment, but open nests like those of eastern phoebes, American robins and northern cardinals might be paid a visit too.

I remember learning of this behavior years ago and thinking, wow, those house wrens are a force to be reckoned with. However they’re not the only ones wreaking havoc among the boughs.

The brown-headed cowbird is here now, too, forcing its unique approach to parenting in nests throughout the region. Molothrus ater is an obligate brood parasite, meaning it lays its eggs in other species’ nests. They tend to favor nests of smaller birds, like song sparrows and chipping sparrows, but robin and red-winged blackbird nests are frequent choices too; in fact records cited by the Cornell Lab of Ornithology show more than 220 species have fostered cowbird chicks among their own.

It’s a very successful strategy, for the cowbird. Free from the hard work of raising young, a female can focus on depositing her eggs-as many as 40 per nesting season-in other birds’ nests, sometimes tossing one or two of their eggs overboard to make room. Should the host bird retaliate with a similar action, cowbirds have been known to return and destroy the host’s eggs.

Cowbird nestlings bring their own brand of excitement to the nest too. Typically larger than their nestmates, they can expel unhatched eggs or young hatchlings. They also get a good share of the nourishment Mom and/or Pop Host provide, so they grow quickly. If you’ve ever seen, say, a cardinal feeding a single brown bird that doesn’t look at all cardinal-like, you’ve witnessed another win for cowbird reproduction.

But the egg drama doesn’t stop there. You’ve no doubt heard of the nest-robbing habits of species such as crows, blue jays and grackles; you can add red-bellied and red-headed woodpeckers to that list, as well as hawks like Cooper’s and redtails.

I was thinking about these species the other day too, as the wren was singing. Then, as if to underscore my thoughts I received an email from a friend who’d just witnessed a grackle fly in with a blue (possibly robin’s) egg and land on a railing. For these birds, eggs and nestlings are free food offering valuable fat and protein just the same way worms and caterpillars do.

Then we’ve got those birds where, just like in those 1970s horror films, the killer actually lurks inside the house, er, nest. Siblicide is practiced among some species with asynchronous hatching-that is, eggs that hatch in the order they were laid, instead of all at once. Most of the birds cited in literature, such as cormorants, egrets and herons, and eagles, hawks and owls, aren’t your typical backyard birds. But I thought the behavior was worth mentioning because it certainly occurs within in our region, and with many birds in full-one breeding mode, likely is happening right now in our local parks and preserves.

We could go on, delving into the deadly impact the nonnative house sparrows and European starlings have had on the nests of bluebirds, purple martins and other native favorites. But you know what? Birds will do what birds do, and so will the flowers, insects, frogs…

We can impart our human values on their activities, or we can choose to accept them for what they are: Diverse organisms doing their best to survive during this most productive time of year-spring. Glorious spring!