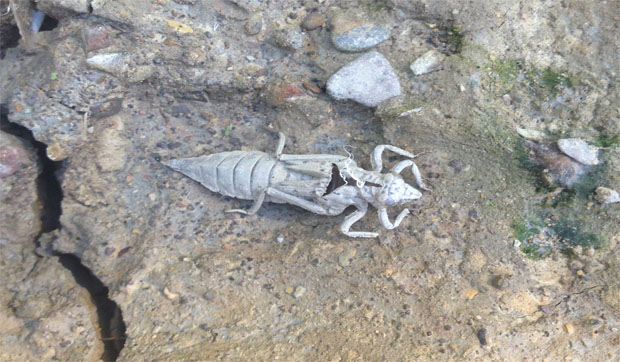 This interesting artifact is the cast skin, or exoskeleton, of a dragonfly nymph that has emerged from the water and molted into adulthood.
Well, it’s that time of year again, the Season of Shed Skins.

Well, it’s that time of year again, the Season of Shed Skins.

If you don’t believe me, just go outside and take a look around. We’ve got shed cicada shells on tree trunks, shed spider molts in webs by porch lights, and shed dragonfly skins on cattails. These shells, molts and skins all are cast exoskeletons, and they literally are everywhere.

Think about this: Many creatures with a hard outer covering – things like insects, spiders and crayfish, to name a few – need to shed in order to grow. That empty chrysalis you found? That actually was the pupal covering the caterpillar produced when it shed its skin for the last time. That spider, up in the corner of the room, that you thought was dead? Chances are it’s just an empty shell and, somewhere, there’s a bigger, better spider hanging out, maybe feeding…and perhaps getting ready to shed again.

Exoskeleton means “outside skeleton” and it refers to the hard outer covering that protects many animals that don’t have endoskeletons, or “inside skeletons,” like we do. The group, or phylum, of animals with exoskeletons is called Arthropoda and includes crustaceans like lobsters and crayfish; myriapods like millipedes and centipedes; insects; and arachnids like spiders and harvestmen, which are also known as daddy longlegs.

Simply put, that’s a lot of critters. One estimate puts the amount of arthropods on our planet at 85% of Earth’s total animal biomass. That means if you took every creature around – everything from giant blue whales and African elephants to teensy ants and fleas – and weighed them on a giant scale, 85% of that total weight would be arthropods. It all adds up to more exoskeletons than you can shake a field guide at.

Most of these coverings contain chitin, a tough, semitransparent substance that protects the inside of an arthropod the way shoes protect your feet. In your case, when your feet grow, it’s time to buy bigger shoes. In the case of arthropods, growth means it’s time to shed.

The process of skin shedding has lots of different names, depending on how technical you want to get. Another word for it is molting, and the fancy scientific word is ecdysis (emphasis on the “ec”). Most arthropods molt many times as they grow from juvenile to adult. Some consume the remains of the shed, also known as exuviae, to recycle the proteins and polysaccharides it contains, but many do not.

Ecdysis involves several steps. To begin, the arthropod usually stops eating and looks for a safe haven in which to proceed. Meanwhile, inside the organism, its existing exoskeleton begins to separate from the new one forming underneath. Enzymes go to work, digesting the inner layers of the old covering and aiding in separation.

When the new exoskeleton is just about ready, the critter, which has been understandably inactive throughout the process, starts to move just ever so slightly. This movement combined with an increase in fluid pressure causes a crack to form, usually along the back, near the head. Finally, with what has to be a monumental effort, the little guy comes crawling out, just a bit bigger than he was before. But the story doesn’t end there.

In this teneral stage, the individual is extremely vulnerable, since it can’t really crawl, hop or fly. Compounding matters is the fact that teneral organisms are, well, tender – no crunchy wings or crusty shell to spoil an otherwise succulent and high-protein meal. (Think peel-and-eat shrimp, already peeled.) With mobility limited and predators all around, good cover or camouflage is essential.

After a few hours though the new covering is sufficiently hard and the critter can resume its normal activities. It moves along, leaving its shed skin behind. And that’s where you come in.

Have you ever taken the time to appreciate the intricate detail of a recently shed exoskeleton? If you look closely, maybe even use a hand lens, you will be able see all sorts of amazing structures – mouth parts, eye coverings, antennae, wing pads and even, on some species, the spiracles, or breathing holes, along the abdomen.

Cicada shells, spider molts, crayfish sheds-they’re all out there, waiting to be discovered. Like sunny days and warm temperatures, they’re part of the fun that comes along with these waning days of summer.

It’s a time of year nature nerds eagerly anticipate. In fact in some ways it’s kinda like Christmas as we look for presents left on stones, walls and tree bark. From my yard to yours, Season’s Greetings!