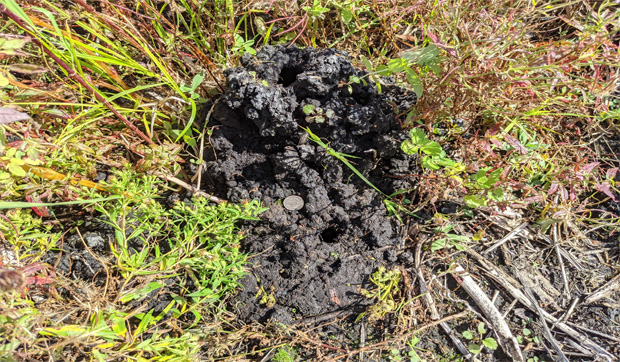 Topped with a large hole, a crayfish chimney stands tall and volcano like at Ferson Creek Fen in St. Charles. A second, smaller hole, which plays a role in burrow ventilation, can be seen below and to the right of the quarter used for scale.

The world has a lot of famous volcanoes, but absolutely none of them are here in northern Illinois. We just don’t have the geologic conditions for it.

Yet there it was, at Ferson Creek Fen in St. Charles: a heap of mud 10 inches tall, conical in shape, with a deep hole smack in the middle of its peak. All it needed was a puff of smoke and a little lava and it would’ve been Mount Vesuvius Jr.

I marveled at the formation for a good several minutes, admiring its uniform sides and near-perfect symmetry. I even tried to look down into its depths but, try as I might, I couldn’t get the flashlight on my phone to shine at the proper angle.

Instead, I opted to take a photo. But before snapping the pic, I checked my pockets for the lip balm I always carry, and frequently use for scale. (Fun fact: The tubes of most mainstream lip balm brands measure 2 5/8th in.)

Alas, a quick inspection soon revealed that none of the 13 pockets in the pants, shirt and jacket I was wearing that day held a lip balm or anything else measuring 2 5/8th in. Disappointed, I looked over what potential measuring devices my pocket search had revealed: two sets of keys; a Leatherman multitool; a pen; an acorn; a few cool rocks; and some loose change. Of the available objects, I figured one of the two quarters would be best.

By now you’ve probably figured out that this extraordinary landform was not a volcano, nor even volcanic in origin. It was, however, still mighty impressive. It was the mud tower, or chimney, created by one of our area’s burrowing crayfish.

Most of the crayfish we have in Kane County, and throughout northern Illinois, are aquatic in nature-but this group of animals actually is ranked according to their ability to construct burrows. Tertiary burrowers, which account for the majority of the eight or so species we see in our area, usually shelter under rocks and logs. They can, if need be, construct a simple burrow and will do so if all the good hiding spots are taken, or if a drought drops the water levels perilously low.

Primary burrowers, however, are terrestrial. Rather than scooting through water they walk on land, though it’s rare that we see them. They spend much of their lives in the subterranean depths of their multi-chambered burrows, venturing out at night and on damp days for foraging and mating.

In Kane County we have two species that are considered primary burrowers: the prairie crayfish and the devil crayfish. Both species construct their burrows in the same way, using their hefty claws, or chelae, to excavate balls of mud, which they roll up and deposit in a circular wall around the entrance hole. The deeper the burrow, the higher the wall, or chimney (or volcano, for those of us with fanciful imaginations).

But these formations aren’t just a byproduct of the excavating; they have a function too. When paired with a second, lower entrance these chimneys act as passive ventilation system. Fresh air is drawn into the burrow at the lower hole and then exits through the taller one.
I was mulling over this engineering feat as I prepared to take some photos of the extraordinary Ferson Creek Fen chimney-volcano. Starting at the bottom of the structure, I placed the one of the quarters in various positions, gradually moving it up the formation in an effort to show the formation’s massive size.

After many attempts, I got the idea that perching the coin at the top of the chimney, right next to the hole, might show not only the great height, but also the grand diameter of the entrance.

In trying to get the quarter in just the right spot, I tapped it a little too hard and…whoops! Down the chimney it went.

I could only imagine what happened as the coin tumbled down into the depths. Depending on soil and moisture conditions, crayfish burrows can extend from 3 ft. down to as much as 15 ft. below the surface.

Best case scenario, the quarter got stuck in some mud a foot or two down. Worst case, it blocked a passageway and caused the resident crayfish to have to dig a new channel around it.

But there’s that part of my brain-the same part that sees the crayfish chimney as a miniature volcano-that is picturing a third scenario: The richest crustacean in all the land…a crayfish with a quarter clenched in its claw.