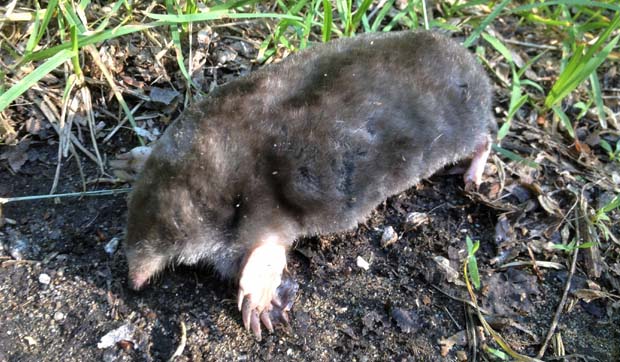 Our local species of mole, the eastern or common mole, is also known as Scalopus aquaticus, which would indicate an association with water. Alas, this species is the least aquatic of the North American moles, although it does a fairly good job of “swimming” through soil in search of invertebrates on which to feed. (Photo credit: Gary Stolz/USFWS)

So last week we dipped a pinky toe into the pool that is scientific binomials-that is, the Latin (or Greek, or other languages, as the case may be) names given to plants and animals. The great advantage of these designations is that they are universal-Mephitis mephitis, or Stinky stinky in Latin, is the scientific name for the striped skunk, and it means the same thing whether you’re a skunk fancier in the United States, the United Kingdom, the United Arab Emirates…you get the picture.

A second advantage of this seemingly cumbersome nomenclature is that it is often descriptive. It may express an obvious quality of the organism, as in the case of Stinky stinky, or it may hint at a lesser known trait. Carl Linnaeus, the father of modern taxonomy (he named more than 4,400 species of animals and 7,700 species of plants) for example gave milkweed the genus name Asclepias, after Asclepius, the Greek god of healing. Milkweeds for centuries were used medicinally to treat a diversity of ailments, including warts, ringworm, typhus, dysentery and asthma.

All is well and good when scientific names provide accurate descriptions of the plants and animals to which they are assigned. But, every once in a while, the nomenclature train derails, and runs wildly off the tracks.

That’s where this admitted Word Geek gets really excited.

Take, for instance, the genus name for the ragweeds, those wind-pollinated plants that trigger watery, itchy eyes and noses for millions of allergy sufferers. Linnaeus chose the name Ambrosia, as in food of the gods, for this group that contains about 50 species. It’s thought that he based his choice not so much on a sweet nectar of the gods, or a delicious fruit salad, but rather on the fact that ancient herbalists used the plant he named A. maritima to treat upset stomachs.

Another example is Linnaeus’s choice of names for the eastern or common mole. Someone unfamiliar with Scalopus aquaticus might read that name and assume that the animal is the Michael Phelps of mammaldom. But you know what they say about the word assume…

The day Linnaeus named the eastern mole, he had been presented with a specimen that had been found dead in a body of water. He inferred that the animal must have an association with H2O, and deemed aquaticus an appropriate species name. Oops! Eastern moles are the least aquatic of any North American mole species.

The genus name, however, is a little more on target. Linnaeus observed that the mole’s front feet were large and shovel-shaped; he then took the Greek words for digging and foot and put them together to create Scalopus.

The scientific name for our local fox squirrels presents another adventure in misnaming. Sciurus niger translates to Squirrel black. The only problem is that fox squirrels in our area are orange and brown-so much so that many people refer to them by the common name red squirrel. (That in itself is a problem because true  American red squirrels are a smaller species with a preference for eating pine nuts. Their scientific name is Tamiasciurus hudsonicus and they are not known to inhabit this area.)

At any rate, fox squirrels came to be named Squirrel black because the first specimens collected had black fur. This tendency toward dark pigmentation occurs in fox squirrel populations in the southern and eastern states. (Interestingly, the black squirrels that pop up in our area from time to time are not Sciurus niger, but rather Sciurus carolinensis, the gray squirrel.)

Who would have thought that a long-standing name like dinosaur would have issues? Well, sure enough, that name is based on inferences and half truths.

Perhaps you’ve heard that the literal translation of dinosaur is terrible lizard. That in itself is true, but…the name doesn’t quite mean what you think. Dino comes from the Greek deinos, which means terrible, but also wondrous and great, while saurus which means lizard.

The responsibility for this misnomer can be traced to Sir Richard Owen, a controversial British naturalist who coined the term in 1842. In awe of the extremely large fossils being discovered at the time in southern England, he felt the group deserved the lofty name Dinosauria. But as it turns out many dinosaurs were actually quite small. Perhaps most important, none were lizards.

The list could go on and on. Rattus norvegicus, the Norway rat, actually originated in China. Apodidae, which means “without feet” is the family name for the group of birds known as swifts. The birds really do have feet; however, their leg muscles are weak and not well suited for perching. The genus name Alligator is an anglicized form of the Spanish el lagarto, or the lizard. But guess what? Alligators belong to the order Crocodilia, whereas lizards fall into the order Squamata, the “scaly ones.”

Going back to the phrase that started this whole train of thought, “What’s in a name?” the answer is a lot more complex than Juliet Capulet would lead us to believe. “A rose by any other name would smell as sweet,” she said. She clearly overlooked rose of Sharon, a member of the hibiscus family that has little to no scent.

We’ll let the Word Geekiness stop here, for now. But beware, it may pop up again soon. Like next week, when we take a look at how to handle bats that have taken up residents inside buildings. Species in our area include Myotis lucifugus, the little brown bat, whose scientific name translates to Mouse that shuns daylight. It’s a great name, except that bats are not mice, or even rodents…