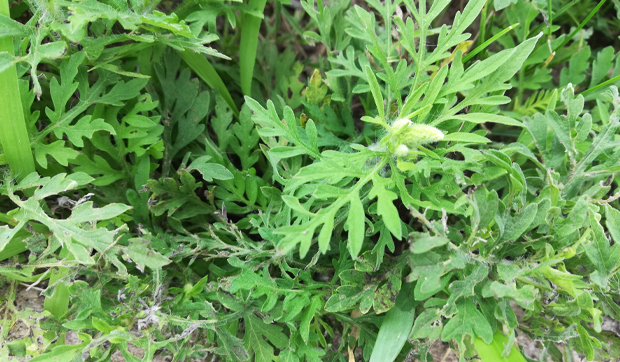 Because they are pollinated by wind rather than insects or other animals, ragweed flowers have no need to be flashy. They are small and green and hard to notice, but nonetheless effective in producing pollen-as many as a billion grains per plant. Common ragweed also is resilient, as evidenced by these plants that persist in flowering despite frequent mowing.

If you suffer from seasonal allergies, you know exactly what I’m talking about. Your body’s immune system identifies some otherwise innocuous particle as harmful. It produces antibodies to protect you and all is well…until those particles come around again. Then your system launches into overdrive, attacking the offending bits with chemicals like histamine and initiating a cavalcade of symptoms that include itchy, watery eyes, a drippy nose, coughing and of course those sneezes.

Not to brag, but oftentimes it’s nature that’s responsible for producing those reactions. Tree pollens in spring, grass pollens and mold as we move into summer and, now, ragweed have folks wheezing up a storm. In an ordinary year those actions can make you unwelcome in a crowd, but this year, with everyone on high alert for covid indicators, any sort of act that produces droplets can make you a social pariah.

Believe me, I know.

I’ve had an on-again, off-again relationship with ragweed and this year we’re on for sure. For a few weeks now I’ve dealing with sideways glances as I cough-lightly and into my mask, covered by my elbow-while standing in a socially distanced line at the grocery store, sitting at a socially distanced table at a restaurant and filling my car’s tank at a naturally distanced gas pump.

For a social creature like me, those looks can be hard to take. I get it though, and am adjusting my behaviors accordingly, downing allergy meds before heading out and keeping errands to a minimum-basically keeping to all the covid protocols we’ve learned these past few months.

The other day, though, I cancelled plans for a long-anticipated outing to Galena. As I called my friend Cindi, who was hosting the meteor-viewing event at her farm in Scales Mound, I couldn’t help but resent, just a wee bit, the effects that ragweed has on my life and the lives of countless others.

But you know what? Ragweed isn’t a villain-among plants anyway. No, among its own kind ragweed is an astounding success.

Every plant on our green earth has one primary objective. It’s not to make pretty flowers for us to admire, or food for us to eat. Plants live for the simple goal of making more plants.

And that’s where ragweed earns the title of winner, winner pollen dinner.

In our area we have essentially two species, common ragweed and giant ragweed. (Dick Young, in his classic guide Kane County Wild Plants & Natural Areas, lists a third species, western ragweed, as present but found only along railroad tracks and other sterile waste areas.)

Common and giant ragweed look quite different, with the former having finely cut, lacy leaves and a height of up to 30 in., and the latter living up to its name with large, tri-lobed leaves and heights of up to 12 ft. But the two plants share a common characteristic: Their flowers rely on pollination via wind. And that’s where its success (or trouble, for allergy sufferers) sets in.

The pollen grains of ragweed (and many trees and grasses) are, to use a scientific term, teensy. They need to be in order to be dispersed in the breeze. As they fly through the air by the-to use another technical term-zillions, many land where they’re not supposed to, like our eyes and noses. But a sufficient number (did I mention that each plant can produce up to a billion pollen grains?) get to where they need to be, which is on the flowers of other ragweed plants.

From there on the plant is fertilized and proceeds to produce an abundance of small, bur-like seeds-as many as 5,000 per plant. Those seeds that hit the soil go on to produce next year’s ragweed crop. But those that don’t likely end up in a crop of a different sort-the one that’s part of a bird’s digestive track.

Ragweed seeds are a valuable source of food for wildlife, including a number of our favorite wintertime birds. Dark-eyed juncos feast on the protein- and oil-rich seeds, as do American goldfinches, American tree sparrows, mourning doves and assorted woodpeckers, to name just a few. Gamebirds like pheasant and quail also feed on the nutritious seeds, which accounts for the huge stands of ragweed often cultivated in game conservation areas.

There’s two sides to every story, that’s for sure. While ragweed might seem to be a demon plant growing only to cause misery, its nutrient value is indisputable and its role in our local ecology is vital.

The kicker to the ragweed story? Its genus name is Ambrosia, the glorious substance in referenced in Greek and Roman mythology. That’s right. Ragweed, at least in botanical terms, is the food of the gods-a lofty status that’s nothing to sneeze at!