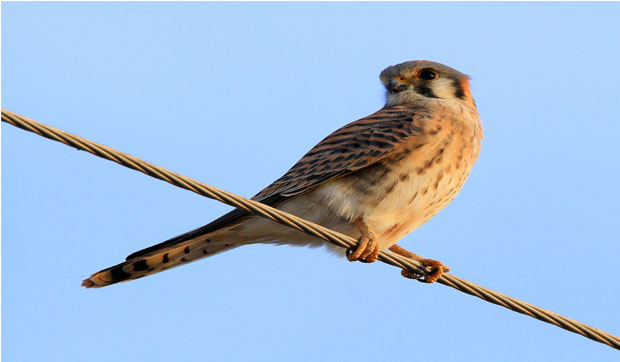 American Kestrels are small falcons that favor grasslands and other areas with low vegetation. These colorful birds, sometimes mistaken for mourning doves, survey their hunting grounds from prominent posts like tall poles and utility lines.

Well, it happened again the other day. There I was, sitting at a red light-a reeeeally looong red light-when I did something I shouldn’t have. No I didn’t start texting (though that’s what it seemed everyone else was doing, including the motorcyclist next to me) nor did I make a call or otherwise engage with my phone.

Nope, what I did was much worse. I looked up. And if you or anyone you’ve ever been in a car with is a birder, you know how dangerous that can be. For “up” is where the birds are.

Sometimes this habit isn’t so bad. Species like red-tailed hawks often can be identified even at 55 mph. Skeins of Canada geese are no-brainers, as are the scads of starlings that line up on utility wires on cold winter days. But there are those times when a quick glance at a bird just isn’t going to cut it.

Probably because I am and always will be a mediocre birder, I’ve always struggled with the difference between a mourning dove and an American kestrel when they’re perched on a wire and silhouetted against the sky-as both species often do.

If you compare photos of these two birds you’ll think I’m nuts. But from a distance, with not-so-great lighting, their similar size and posture requires my not-so-great eyes to look at less obvious details like the size and shape of the head and tail. And since that’s not always possible given, you know, traffic and all, I’ve started falling back on a simple rule: If there’s more than one angular bird with a long tail perched together on the wire, they’re mourning doves, but if there’s only one bird it MIGHT be a kestrel.

So it was the other day: a lone bird balanced on a utility line just past the intersection at which I was stopped. “It MIGHT be a kestrel!” I said, just loud enough for my three furry car buddies to hear. Neither Joey nor Boeker even raised their heads but Kit, my girl with the never-ending appetite, stood and looked hopefully toward the windshield, no doubt hoping that “kestrel” is another word for “hamburger” or “ice cream”.

If you’re not a birder, you might share the boy dogs’ opinion that kestrels are no big deal. But if you’re familiar with the bird-North America’s smallest and, as I see it, prettiest falcon-they’re definitely a reason to sit up and take notice.

Raptors aren’t really known for their striking color combinations, but the American kestrel is one notable exception. Striking combinations of gray blue and rust brown punctuated with black and white-with mature males having a skosh more color than females and immatures-catch your eye when the lighting is right. Should you be so lucky, look also for two vertical black bars (known as the moustache and sideburns) on the sides of the head of both sexes.

But what if you’re sitting at a stoplight, or whizzing past at highway speeds, and spy a bird on a wire? That’s when it’s helpful to look at the bird’s form, which gives away its predatory nature. The head, larger and blockier than a dove’s, bears a short, hooked bill; the body, too, is just a skosh beefier. And while both birds have a longish tail, that of the dove tapers to a point while the kestrel’s a little more squared off.

One sure way to tell the two species apart is to spot a kestrel in hunting mode. Airborne and scanning the ground for prey (which include a diverse variety of insects as well as small rodents and birds) they employ a behavior called kiting-that is, facing the wind and using even the slightest breeze to help them maintain altitude through a combination of flapping and gliding.

Once something suitable is seen, the bird dives toward the ground at speeds of 50-60 miles an hour. This plunge, sometimes called a stoop, ends with the kestrel grasping the unsuspecting prey with its inordinately strong feet and long talons, and quickly dispatching it with a nip to the head.

I remember a few short years ago watching a kestrel kiting above a vacant lot next to the St. Charles Bowl on Route 64. The bird held its position for close to a minute before diving next to a clump of vegetation for…maybe a grasshopper? I couldn’t see how the endeavor ended, but since the bird didn’t immediately fly away I guessed that hunt was successful and s/he chose to feed there; larger prey usually is taken to a perch for dissection and, sometimes, caching of leftovers.

I haven’t seen a kestrel in that field since then, which isn’t surprising giving the development that’s occurred in that area. In fact, habitat loss is one of the main factors contributing to the kestrel’s population decline. Though not in a steep dive (a stoop?), the species’ numbers have decreased by more than 50% over the past 60 years.

Next week: We learn about local efforts to help these tiny dynamos.

Pam Otto, who finally decided that bird on the wire was a mourning dove and not a kestrel, is the outreach ambassador for the St. Charles Park District. She can be reached at 630-513-4346 or potto@stcparks.org.