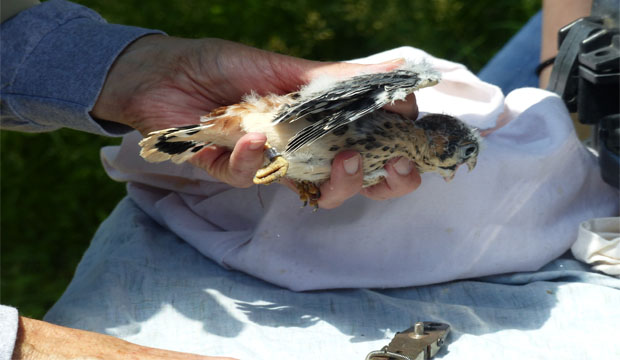 With assistance from wildlife biologists from the Forest Preserve District of Cook County, American kestrel chicks in the Kane County nest box program are weighed, measured and banded.

After last week’s column on American kestrels, a few folks contacted me with recollections of encounters with this pint-sized bird of prey-the one some of you call the sparrow hawk.

But while the memories were overwhelmingly happy ones, I’d be remiss if I didn’t report that many of your stories ended with some sort of variation on “but gosh it’s been a while since I’ve seen one.”

It’s true, kestrels are not endangered or even threatened in Illinois. At least not yet. But nationwide their numbers declined 1.4% each year between 1966 and 2019, a disturbing trend that has resulted in 50% fewer kestrels today than we had 50 years ago.

Granted, the kestrel population might have experienced an uptick in the 18th and 19th Centuries as humans expanded their range; clearing land for homesteads and farm fields created just the sort of wide-open habitat that kestrels prefer. But as the human population continued to grow, and GROW, those fields became housing developments, strip malls, streets and parking lots, and that ideal habitat shrank, and then shrank some more.

Meanwhile, while we still have farms, modern practices call for the clearing of the hedgerows, brush, trees and snags-those wonderful, cavity-filled dead trees–that separate fields, further decreasing habitat for both kestrels and their prey.

All this shrinking appears to be having an effect on the birds themselves. A 2018 study that examined kestrel data gathered during migrations found that in many regions the birds are getting smaller and lighter, a trend the researchers hypothesize is partly due to decreased food availability-a consequence of habitat loss.

The trouble doesn’t stop there. Weather extremes in the form of cold, rainy springs and periods of summer drought; pesticide use that kills the insects and rodents kestrels feed on; and the lingering effects of environmental pollutants all may be contributing to kestrels’ smaller clutches and lower hatch rates for nesting pairs.

Speaking of nests…that’s another area where kestrels have struggled. These little falcons are secondary cavity nesters, which means instead of excavating their own holes (a la woodpeckers, kingfishers and other big-billed birds) they rely on instinct and a whole lot of luck-an element seemingly in short supply for this plucky raptor. Fewer dead trees left standing, plus a range of other species (including the audacious European starling) competing for those precious cavities, can leave kestrels out in the cold.

Ah, but here is where this Good Natured story, which has been sounding increasingly bad, takes a refreshing turn for the better thanks to the dedicated individuals behind the Kane County Kestrel Nest Box Program.

The effort began in 2012 when Taylor Joray, at the time a Forest Preserve District of Kane County intern and a student at Illinois College, installed 12 nest boxes in six area forest preserves as part of an undergraduate research project. His work that first year were rewarded with the successful fledging of five kestrels at Dick Young Forest Preserve.

Over time the project, and the number of people associated with it, continued to grow. “In 2014, with the help of the Veterans Conservation Corps of Chicagoland, around 20 additional boxes were constructed and installed across Kane County,” Taylor recalls. “At this point, additional volunteers began to play a more involved role with the weekly monitoring of boxes. Each year, after the breeding season was over with, I would collect all of the monitoring data and enter it onto the American Kestrel Partnership’s online database.” (AMKP can be accessed at: https://kestrel.peregrinefund.org).

My friend John Heneghan is one of those volunteers. He started early on, building nest boxes for Taylor, and today monitors and maintains the box at Aurora West Forest Preserve. Work starts in April, with the cleaning out of last year’s nest material, and the addition of fresh wood chips. He then watches the box for activity and, if/when a kestrel pair starts nesting, he checks in on them every 10 days. “I let Sadie know when eggs were present, when they hatched and again about 2 weeks later when they are close to the size they can be banded,” he says.

It’s those bands that will contribute to the growing amount of data on American kestrels, and potentially lead to answers of what kestrels need to survive and thrive. The chicks are weighed and measured, and blood samples are taken to check for the presence of heavy metals. Their bands, each with a unique number, will identify them throughout their lives and can contribute valuable information on their movements, behavior and survival.

In 2020 the Kane County Kestrel Nest Box Program recorded its 150th successful kestrel fledge. As the program enters its 11th year, let’s hope those numbers, like its namesake falcon, continue to soar.