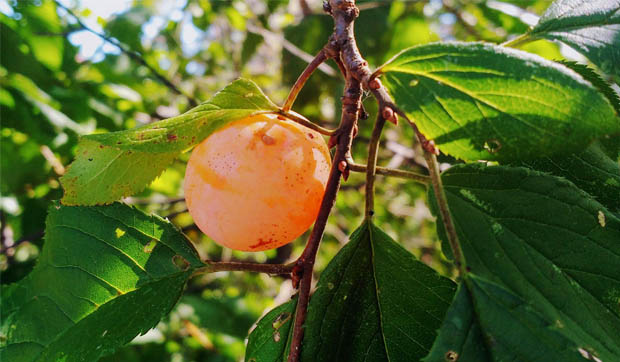 Photo Caption: Measuring an inch or so in diameter, wild American plums are smaller than commercial varieties but packed with flavor. This native species also provides many benefits to local wildlife.

I don’t mean to brag, but I’ve had quite the plum job these past couple of weeks.

Since early September we’ve been conducting Wetland Ecology field trips at Otter Creek Bend Wetland Park in St. Charles. Besides the obvious perks of being able to muck around in a marsh for hours at a time (Hello, leeches! More on these at a later date), we’ve been able to avail ourselves of some fortuitous landscaping up by the McKay Overlook: a leggy stand of American plum, Prunus americanus.

It’s true, untamed plum trees aren’t much to look at, at least at this time of year. They can spread by runners off of the roots as well as by seeds, so a few trees left to their own devices will eventually tangle together in thickets. And the ground around them is littered with fallen, fermenting fruits, which provide irresistible fodder for yellowjacket wasps and other stingy things.

But the fruit that still hangs from the trees…oh my! If you’re like me and have pretty much given up on those pretty, but rock hard and flavorless, supermarket plums, an American plum tree just might restore your faith in this healthful fruit.

The late, great Kane County naturalist Dick Young describes the September drupe of the American plum as a “wild scavenger’s delight.”  Deep yellow with a blush of pink or red, these little gems are about the size of a gumball and possess a flesh that is tender, sweet and juicy-delightful, indeed.

The trick, though, is finding them. Plums that grow on public lands like parks and forest preserves are protected from collecting. (I know, it seems like I broke a rule by eating some park district plums. But I got permission, ate only six, and like a good little steward saved the pits for propagation next spring.) Your best bet if you plan on eating more than one, or if you want to gather a basketful for jam, is to find private landowners with a plum grove and ask their consent.

You’ll also need to stay one step ahead of the wildlife. Wild plums are a hot commodity among birds like blue jays, brown thrashers and grackles, as well as mammals like squirrels, opossums, raccoons, foxes and coyotes. The ripe fruit at OCB disappeared from the trees within a week of us seeing the first golden orbs (remember, I ate only six) and the fruit on the ground had been picked clean of flesh as well as seeds.

Seeds are after all why any plant produces fruit, and American plums are lucky to have so many willing and able seed dispersers. American plum seeds, which look like smooth, oblong stones, as well as the fruit’s thick skins are a common sight in scat right now-especially along trails frequented by coyotes. These scats are a great reminder that our coyote neighbors, so often thought of as carnivores, do in fact eat a fairly omnivorous diet.

With any luck, some of those seeds will eventually germinate and become plum trees in their own right. As the trees mature and increase size, so too do their benefits to wildlife. The nearly impenetrable branches of a mature thicket offer ideal habitat for nesting birds, and wind breaks and winter browse for rabbits and deer.

If you’re contemplating adding an American plum to your home landscape, keep these qualities in mind. As wonderful as plums are, they might not be the best choice for in-town lots where wildlife traffic can become a concern. But if you’ve got some wide-open spaces that could accommodate a spreading thicket, and the animals it will bring, P. americanus might be a worthy addition.

Plum trees grown from seed start flowering at about age three. The May blossoms are a joy in themselves, drawing in native pollinators with their bright white petals and strong scent. You’ll need at least two different trees to ensure that cross pollination occurs, and some patience as it takes about four months for the fruit to grow and ripen.

Use this time to collect recipes for wild plum jelly, plum butter, plum leather and more. Then get ready to harvest, cook and enjoy a bounty that’s just plum nice.