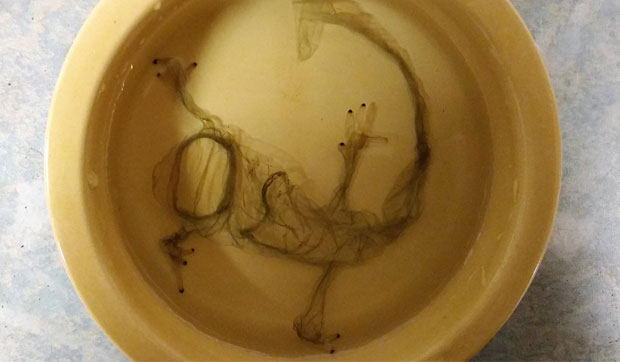 Like a lacy glove that’s been cast aside, the shed skin of a tiger salamander floats in a dish of water. Note the keratinized tips of the toes, which aid in digging and gripping.

If you’ve ever visited Hickory Knolls, you probably noticed that we have a lot of snakes. Snakes in the lobby, snakes in the exhibit room, snakes in the classroom. If we had a plane, we’d probably have snakes there too, albeit without Samuel L. Jackson and Julianna Margulies along for the ride.

All our squiggly friends are captive-bred donations, and as such portray an important part of our education mission, which is to remind people that wild things need to stay in the wild; conversely, pet animals need to remain as pets, and not be released or “given their freedom.”

Yet, education mission aside, the fact remains that we’ve got a building full of snakes. Such a backdrop usually prompts visitors to ask lots of snake-related questions. No. 1 among them has been, and likely always will be, “Are they poisonous?”

The answer to that query is twofold. The first part is, “No,” and the second part weaves in a little explanation on the difference between poisonous and venomous. (Short answer: Poisons are either ingested, inhales or touched, while venoms are injected. Picture poison ivy and poison dart frogs, vs. bee stings, spider bites and snake bites.)

The No. 2 question usually addresses the topic of snakes shedding their skin. How often, how long does it take, do they eat their sheds? The respective answers are, “It depends on their age and growth rate, and whether they are trying to heal a wound;” “about a half hour;” and “no.”

The people asking the questions typically are happy with our answers and take away some newfound knowledge. But every once in a while, we like to ramp up our interpretive message with an extra statement along the lines of, “You know, snakes aren’t the only animals that shed their skins…”

From there we might launch into a discussion of exoskeletons, and how virtually everything with a hard outer shell – critters like insects, spiders and crayfish, to name a few – shed their skins, or cuticle layers, too. A molt from one of our tarantulas is often used to illustrate this point, and if someone wants to see more we’ve got a whole box of assorted shed “parts”—cicada shells, butterfly chrysalises, dragonfly exuviae (from the Latin for “things stripped from the body”)—that we can dip into and provide, if not hours, at least several minutes of entertainment and education.

However, every once in a while, if a visitor is really lucky, he or she might be treated to the pièce de résistance among molts…the cast skin of a tiger salamander.

I suppose I should mention that in addition to the 13 snakes that call Hickory Knolls home, we have an assortment of Ambystoma tigrinum that have come to us through various means. People are often quite curious because, although common throughout our area, tiger salamanders tend to stay underground for much of the year (they are part of a family known as the mole salamanders) and hence are rarely seen.

But what’s even more unusual than seeing a salamander is finding their cast skin. The outer epidermal layer comes off in its entirety, like a snake, but instead of being dry and scaly it is soft and very fragile.

Some amphibians actually eat their cast skins. I remember once watching a captive green frog shed its skin. When I first walked into the room, I thought something was dreadfully wrong. The frog was puffed up, like he’d just swallowed a golf ball, and he appeared to be breathing heavily and in distress.

I next noticed a translucent material about his mouth. Good heavens, I thought, what could this slimy discharge be?

As I continued watching, though, I noticed that the frog wasn’t expelling the slime, he was consuming it. Using his little froggy feet, he was methodically pushing the gooey strands into his mouth and swallowing them. Slowly—ever so slowly—the dim lightbulb in my brain began to brighten. The frog was molting and, not wanting to let good protein go to waste, was eating the cast skin.

I’ve heard that salamanders will consume their molts too but I’ve yet to observe that activity. The captive animals I’ve watched instead crawl out, like a sausage exiting its casing, and leave the semitransparent skin behind.

Our salamanders don’t seem to be interested in their sheds, but we certainly are. In fact, we added one to our collection just the other day. We certainly wouldn’t want to let a perfectly good molt go to waste.