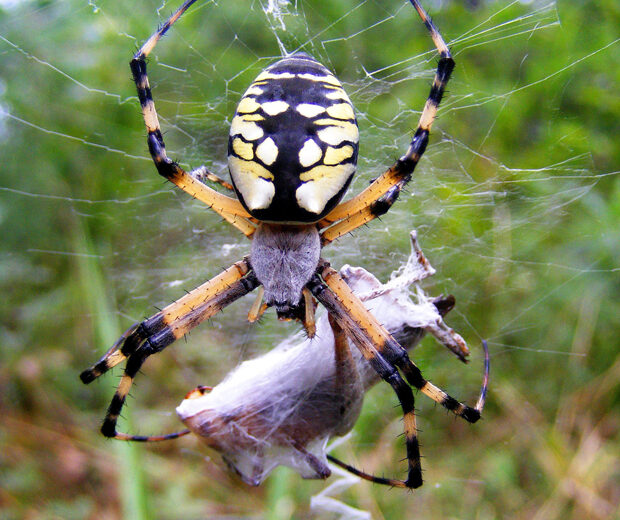 Photo Caption: A female Argiope encases a grasshopper in silk using a maneuver known as the ‘wrap attack.’ Once the prey is immobilized the spider will then bite and kill it. Although lethal to insects, Argiope venom is not considered medically significant to humans. (Photo courtesy of DodgertonSkillhause on morguefile.com)

“Let me show you something hideous!”

My friend Mrs. Janet was pretty emphatic as she pulled her phone from her purse. Knowing that Janet works with kids, and having heard some of her war stories of what can emit from those little bodies-especially when they’re sick or hurt-I at first was hesitant to look. But I quickly changed my mind when I heard her mutter, as she scrolled through her photos, two words that when combined form my favorite phrase of the season: “Enormous,” and “Spider!”

It seems that Mrs. Janet’s husband George had come upon a web and spider, the likes of which he had never seen before. He was struck by its bold colors-deep black and bright yellow-as much as its size, which consisted of a 1-in. body surrounded by legs that were half again as long. Yep, nearly 3 inches of spider, suspended on a proportionately large web that was strung between two plants.

Impressed on a number of levels, George texted a photo of the spider to Janet. And she, good friend that she is, then shared it with me.

What George found was a female Argiope aurantia, the black and yellow garden spider. I’ve heard kids also call these banana spiders, no doubt due to the bright yellow markings splashed across the critter’s dark, bulbous abdomen. This area stands in stark contrast to the front part of the spider’s body, the cephalothorax or prosoma, which typically is a silvery white.

The spider’s scientific name alludes to both of these striking features. The genus name Argiope was taken from Greek mythology and means “of the silver face,” while the species name aurantia basically means “overlaid with gold.”

Even though these references relate to colors, rather than precious metals, in my book Argiopes really are as good as gold. A native predator, the garden spider spins it web in sunny areas of tall vegetation. The stunning orb web, characterized by a distinctive “zipper,” or zig-zag pattern down the middle, catches all manner of flying and hopping insects including, in our area, a large number of nonnative, leaf-gobbling grasshoppers. (True story: The other day we watched as a large grasshopper devoured a leaf of milkweed. That’s right-milkweed. The plant that’s supposed to be rife with toxins and fed upon only by specialized consumers, like monarch butterflies. Clearly those levels must drop as the plant ages. Either that or there’s a new race of super-tough orthopterans out there.)

Scientists are divided in their opinions of just what function the Argiope web’s “zipper” performs. Also called the stabilimentum, the structure is thought by some to prevent birds from crashing into the web and wrecking it. Another theory states that the zig-zag pattern has an ultraviolet quality that is attractive to insects; this theory seems to make sense when you consider that young Argiopes spin larger, more circular stabilimenta. (However, it’s been shown experimentally that hungry spiders sometimes forego spinning any “zipper” at all and yet their webs still catch prey). Still other arachnologists believe that the structure provides camouflage for the spider, or that it simply is there to add heft and support to the web.

Regardless of its true purpose, the stabilimentum is definitely responsible for two other common names for Argiopes: the “writing spider,” for the way the zig zags resemble scrawled handwriting, and the “zipper spider” for the structure itself.

Every year at this time I head out in search of Argiopes. Some years I’m lucky; some years not. This year, at least so far, my results have been mixed. I’ve found three webs, each adorned with a stabilimentum down the middle, but zero spiders. I’ve looked carefully along the stems of the grasses where the web is spun, as well as in the grass below, but, bupkis. Zero. Zilch. Zip.

Just the zipper, in an orb web.

I don’t know if the spiders all heard me tromping closer, and ducked out of sight, or whether they had been predated by something that found them just before I did. In all three cases, the webs were in good shape, indicating that they had been recently maintained.

And so my search continues. If you happen upon an Argiope, I’d love to hear about it. Drop me an email, or give a call. And if you can send a photo, even better. I love looking at these spiders’ graceful lines, the exquisite features of their markings, the intricate detail in their webs.

Plus, I’d be able to return a favor. I could share the picture with Janet.