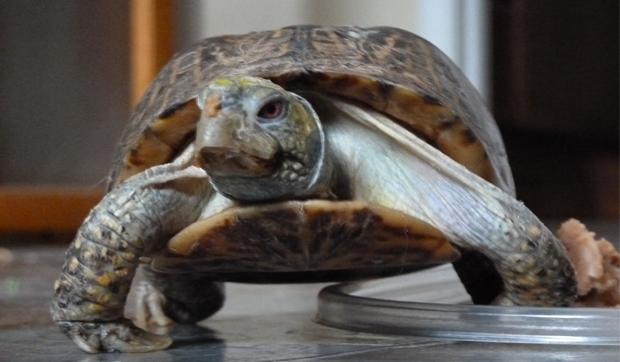 Artie has lived in captivity for 40 years, but he’s never been caged. His diet includes includes insects and worms as well as overripe fruits and vegetables and, as shown here, an occasional applesauce treat.

Ah, 1978. Things were sure were different then.

Jimmy Carter was president. I remember this because I drew his portrait, and all those pearly white teeth, for an assignment in art class at Wheaton North High School.

Gas was 59.9 cents a gallon. This I recall because, as a student in driver’s ed, I had to start chipping in to fuel our family’s 1975 Pontiac Bonneville-a fine, spacious gas guzzler if there ever was one.

And hair styles were long. I never went for the Farrah Fawcett flip, but a lot of my friends did and a few still have the curling iron scars to prove it.

But some things, thankfully, have remained the same. In fact, I’m staring at one right now: Artie, the ornate box turtle that came into my life on Monday October 9, 1978.

We met at a pet store in Aurora’s Fox Valley Mall. I’d wanted a pet turtle for a long time and, that day, my folks finally gave the OK. That I had a learner’s permit and could drive myself to the mall (with my white-knuckled mom riding shotgun) made the day all the more special.

He was in an enclosure with lots of other box turtles, and when his eyes (fire-engine red, a trait of male box turtles) met mine, I knew he was the chelonian for me. When I picked him up he hissed, in effect sealing the deal. Forty years later we’re still together, a girl and her turtle.

But Artie’s story also has an element of irony. Because, had I known then what I know now, I never would have gotten him.

Box turtles – in fact, turtles of many species – are in a tough spot these days. Habitat loss has hit them hard. And, as more and more roads traverse turtles’ home ranges, more and more are getting hit by cars. Over the decades I’ve had Arthur, the ornate box turtle’s status in Illinois has slipped to the point where the species population is considered threatened. I never thought I’d need to file paperwork in order to keep a pet, but due to the decline I now have a Permit for Possession of Endangered or Threatened Species on file with the Illinois Department of Natural Resources.

What bothers me most though is that box turtles have suffered huge losses thanks to the very means that brought Artie to me – the pet trade. Only recently have states started to clamp down on the capture of wild turtles. And, even then, many of the clamps aren’t very tight. Lots of wild-caught animals are still making their way into pet stores and reptile swap meets.

With the December holidays on the horizon, you or someone you know may be considering giving or getting the gift of a pet turtle. While that may seem like a fine idea, just be sure you and the intended recipient know what lies ahead.

For one thing, turtles live a long time. A really long time. Artie was no kid when I got him and, all these years later, he’s still going strong. With box turtles, life spans of 50 years or more are the norm, not the exception. For other species, such as red-eared sliders, average life expectancy is maybe 35 years – less than a box turtle, yes, but still considerably longer than the three or four years you can expect from a hamster or gerbil. When you get a turtle as a pet, be prepared to be committed to it for decades to come.

This longevity is contingent on proper care – a balanced, species-appropriate diet, clean water, a temperature gradient that allows both basking and cooling, as well as a light source that supplies UV-A and UV-B rays. For aquatic species, don’t forget to factor in a large aquarium or indoor pond along with a heavy-duty filtration system. None of this comes cheap.

Also keep in mind a turtle’s adult size. If you’re looking to acquire, for example, a red-eared slider, and pick out one the size of your palm, it’s probably still a youngster. Female red-eared sliders, which typically grow larger than males, can measure a foot or more as adults. That 20-gallon aquarium that seems adequate for young Shelly will soon be way too small.

Finally, inquire as to where the turtle you’re interested in originated. Don’t accept “wild caught” as an answer; “captive bred” or “rehomed” is what you want to hear. If no captive breeding programs exist for the species you’re interested in, check Web sites such as PetFinder.com or clubs such as The Chicago Herpetological Society, which has an active adoption program for turtles (and lots of other reptiles) in need of new homes. Or, if you want, give us a call. We might be able to hook you up with the species you’re seeking.

Remember though – a life span of 50 years or more. It’s a long time. Just ask Artie.