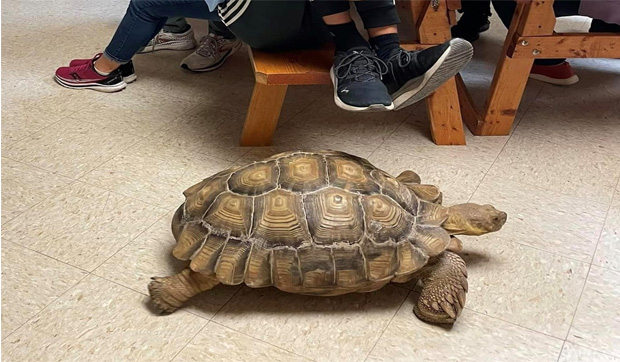 TJ the tortoise, at 75 lbs. and still growing, faced homelessness when he outgrew the enclosure at his former residence. He is now “employed” at the Natural Resource Education Center in DeKalb County where his job is “to show people why buying large exotic species is not the best idea.”

Last week we shared the story of Ding Dong, an African spurred tortoise that took himself on a little walkabout and inadvertently caused quite a stir in his neighborhood along the St. Charles-Geneva border.

The good news is that Ding Dong, all 70 or so pounds of him, has wonderful owners who welcomed him home after his little adventure. He’s got a fenced yard he roams during summer, and indoor lodging in which he luxuriates during the winter. He’s got plenty of grasses and other high-fiber foods to graze on, and plenty of space to roam. In short, he lives like the king (and king-size) tortoise he is.

The bad news is that not all pet tortoises–in fact let’s expand that statement to pet turtles are in general–are as lucky as Ding Dong.
(Before we go any further I should probably clarify that all tortoises are turtles, but not all turtles are tortoises. Also, for the purposes of today’s column, we’re going to stick with pet turtles that live on land. Red-eared sliders-the “dimestore” turtles of the 1950s and ’60s-and other aquatic species can be another topic for another time.)

I couldn’t find a reference stating the number of pet turtles that are abandoned each year. But I do know that I need both hands and several toes to count the people I know who have found pet turtles wandering in places they wouldn’t normally be found. I’m one naturalist at one park district and there are 20,000+ of us around the country. Even if each one only knew of five instances…that’s still a lot of homeless chelonians!

Granted, some of these creatures-like Ding Dong-escape on their own. But unlike Ding Dong, whose owners called the police as soon as they saw the open gate that allowed his departure, many of those wandering turtles are given up for lost.

These rugged animals, widely considered to be slow and not terribly mobile, actually are quite the escape artists. Built like miniature tanks, or bulldozers, they can climb obstacles that seem insurmountable and push through barriers that seem impenetrable.

Samsonite, for example, one of the four box turtles that call our Hickory Knolls Discovery Center home, was found wandering a neighborhood in St. Charles about 25 years ago. The family that found him tried unsuccessfully to find his owners; after keeping him for 12 years they gave him to the park district, where he’s resided ever since.

Besides moving like ATVs, turtles camouflage well-even the big ones. Their coloration typically mimics the surroundings of their native habitats, with many species in the brown-beige or green-black part of the spectrum. They might be obvious within the confines of a cage, but place them in grass or under a shrub and poof! They practically disappear.

I can’t tell you the number of hours I spent crawling around my yard when I had Anita, a leopard tortoise I owned for 23 years, about a quarter of her lifespan. Even though she weighed over 25 lbs., her black-and-yellow shell pattern allowed her to blend into the landscape-just like the leopards the species is named after.

You might have noticed, I’ve been tossing out a lot of time spans here. That’s another factor that figures into the issue of pet turtles that lose their homes. Land-dwelling species can live a looooong time! African spurred tortoises, a.k.a. sulcatas, like Ding Dong have an average lifespan of 80 to 100 years; box turtles like Samsonite easily live 50 years or more. (Long-time Good Natured readers might remember Arthur, my own box turtle, that I acquired in 1978. He was no kid when I got him-I’d guess he was 20 years old, at least. Last weekend we celebrated our 44th anniversary with a little fine bourbon, for me, and some hand-picked grubs for Artie.) As much as we all hate the idea of our pets passing away, an animal that does not die is an equally weighty concern.

Even when a person can make arrangements for an animal that might exceed their own lifetime, turtle ownership also includes the responsibility of suitable accommodations. And in our climate, that endeavor can carry a hefty cost.

Ding Dong’s owners remodeled their house to create a heated indoor space for their big boy. But TJ, a sulcata tortoise once housed in a bathtub, wasn’t so fortunate. His former owner acquired him as a wee little turtle, thinking an enclosure like a tub would be plenty of space. He however quickly outgrew those accommodations and today lives at the Natural Resource Education Center at Russell Woods Forest Preserve in DeKalb County.

My friend Peggy, who runs the NREC, undertook the time and cost of TJ’s care out of her own sense of compassion. But most nature centers and zoos don’t have the staff or capacity to accept that sort of commitment. Turtle rescues do exist, but acquiring a pet with the notion that it will eventually go to a rescue is a lousy plan indeed.

My goodness, here we are at the end of our time and space for this week, and I have yet to get to the really important information I wanted to convey: how to tell if a turtle you’ve encountered is a native species traveling within its range or a displaced pet on the move, and why that’s so important.

Be sure to check in again next week when we cover those points, and more. See ya then!