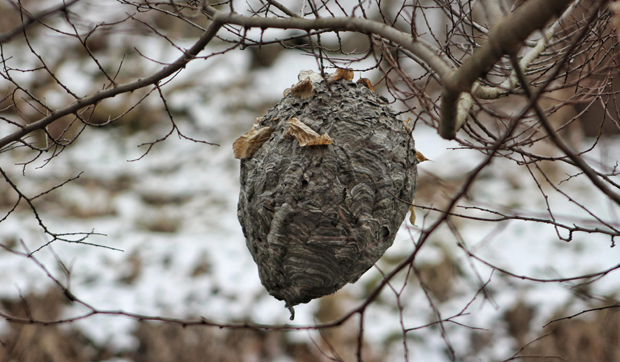 Photo Caption: Bald-faced hornets construct large and durable nests that are now easily seen amid the bare tree branches. Despite their reputation, these wasps are good neighbors to have.

What comes to mind when you think of a good neighbor? State Farm? The folks next door? Bald-faced hornets?

Okay, that last one may sound like a stretch. After all, aren’t hornets the critters people get “mad as”? Isn’t “stirring up a hornet’s nest” the last thing you want to do?

These days we’ve also got the term “murder hornets” weighing heavily on our minds. Rest assured, the sightings of those pesky imports are for now confined to the Pacific Northwest. Nonetheless, the hype their discovery generated sullied the good name of hornets and wasps everywhere-way more than any Raid commercial ever did.

As so often happens with natural phenomena, bald-faced hornets’ reputation for bad behavior has been blown out of proportion. Misinformation abounds. In fact, even their name is wrong. Bald-faced hornets aren’t hornets at all. They are wasps in the family Vespidae. They’ve got a chunky build and measure around 3/4 in. in length, and their markings are black and ivory (“bald” in this sense means white).

It’s true, the females have stingers, and it’s also true that they don’t hesitate to use them when defending their nests. Then again, who wouldn’t, when the lives of hundreds of offspring are at stake?

Also, because the stinger is smooth, not barbed like a honey bee’s, it can be used repeatedly to inject a venom reputed to be quite painful. But to be honest, I can’t say for sure. In all the years I’ve been observing these creatures, I’ve never gotten stung.

To provoke a response you have to disturb the nest, either on purpose or by accident. That can happen, especially when their queen decides your hedge or shrub is The Best Spot Ever and opts to build there. Usually though these regal gals choose locations 10 feet or higher to build their paper palace. So long as you’re not an arborist or a stiltwalker, you and the hornets should be able to cohabitate quite nicely.

Bald-faced hornets really are good neighbors to have around. Their homes are neat and tidy; they’re industrious workers; and, best of all, their habit of preying on pest insects like flies and caterpillars helps make the neighborhood a better place for all of us.

They have a complex social structure that includes a queen, female workers and male drones (who, incidentally, don’t have stingers). They live in large, gray, football-, volleyball- or basketball-sized shaped paper dwellings that, amazingly enough, withstand wind, water and just about anything else our weather throws at them.

While we’re at it, let’s take a minute to appreciate the monumental effort that goes into creating and maintaining that masterpiece. A queen-one that emerged last year, mated and then overwintered-starts the process by building a small nest with a few cells-enough to create her first team of workers. Once they mature, the queen can then focus on her true calling, which is laying eggs, while the rest of her growing colony works on expanding the structure and caring for larvae.

You might have seen bald-faced workers this summer, diligently scraping fibers from bare wood on fences, decks, sheds and trees. They combine the woody bits with the starchy saliva in their mouth to create a pulpy paper, which they use to build stacks of horizontal combs inside the nest and layers of tough paper around the exterior.

As time goes on, their numbers grow too, into the hundreds. More larvae means more demands for food, which translates to fewer pesty insects like flies in your yard and caterpillars on your vegetables, as the workers hasten to bring food back to the developing young.

As summer turns to fall, the colony shifts into the vespine equivalent of a hurry-up offense. The queen modifies her routine of laying only fertilized eggs and adds some unfertilized eggs to the mix to produce a number of drones, or males. She then visits several specially constructed, larger cells and deposits fertilized eggs in them; these larvae are fed more food than the young in normal-sized cells and developed into jumbo offspring-next year’s queens. The future royalty then mate with the drones and vacate the premises, heading for fallen logs or other shelter in which to spend the winter.

With the next generation’s future secure, the current queen dies. And to bring us up to present day, with our recent freezing temperatures, most of the rest of the colony now has too. Adults, larvae and pupae will remain in the nest, preserved, though likely not for long. Wildlife in the know, like squirrels, raccoons and other mammals, and chickadees, woodpeckers and assorted birds, will try their mightiest to climb out to these nests and feast on the nutritious, albeit frozen, morsels within.

Other than this use by local critters, the nests these insects worked so hard to create and maintain won’t be-let me repeat, WILL NOT BE–used again. There’s no need to cut it down or, heavens to Betsy, spray it with poison. Once the animals tear into it, it won’t last long; by spring its tattered remains will be scavenged by birds and other animals making nests of their own.

Next time you’re out and about, scan the bare branches of nearby trees for large, gray sportsball-shaped objects. When you see one you’ll know that, like a good neighbor, the bald-faced hornet was there.