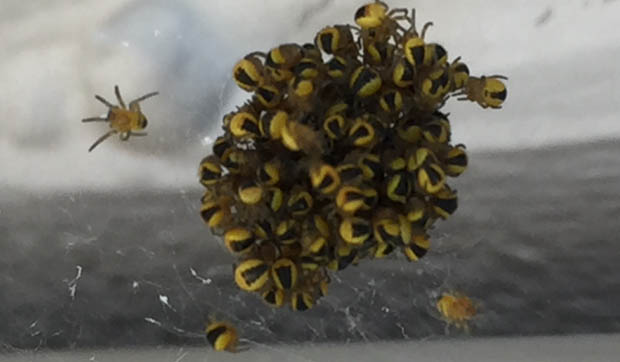 Up, up and away! These recent spider hatchlings, which are of the species Argiope aurantia, commonly known as garden spiders or banana spiders, are preparing to disperse through a method known as ballooning. (Photo courtesy of Cathy and Steve Martens)

Balloons. Can you think of anything more festive? Colorful balls of, usually, latex, floating through the air, leaving oohs and aahs in their wakes. And then all the destruction…Balloons set free to float in the sky can end up killing wildlife with their strings and the fact that some, especially white and pink ones, look like food once they’re deflated and on the ground, or in a body of water.

Actually, let’s leave that topic for another. Instead, this week we’re going to celebrate the joy of ballooning. And don’t think I’m full of hot air!

Ballooning is the term used when baby spiders – known as spiderlings – hatch from their egg case and find an almost immediate need to disperse.

Think about it. A hundred or so spiderlings in one small space, all hungry and needing to feed. Unless they hatch next to a mating cloud of gnats, or feed on each other, they’re all going to starve if they stay in one place. So out of necessity, they go ballooning.

I’m not exactly sure how the term originated; in fact another word to describe the phenomenon is kiting. But I would imagine that seeing teensy spiders floating through the air, with “strings” attached, probably had something to do with it.

Those strings though aren’t ordinary lengths of twine. They’re spider silk, an amazingly strong material for its thickness and weight. We’re all familiar with it, having seen webs around our houses, yards and parks. But little did we know that these protein fibers have the strength, per unit of measurement, of steel.

Spiders have the ability to create different types of silk, depending on use. Some types of silk are made for producing webs, some encase egg sacs, and still others are used for wrapping up fresh prey. Then there are the draglines, which are used for navigation, web building…and ballooning.

I remember a few years back sitting in the Signature Room, the restaurant on the 95th floor of the John Hancock building. I was lucky enough to sit by the window. But while my dining companions were oohing and aahing over the Chicago skyline. Big deal. Meanwhile, I was watching a large cluster of spiders holding their own in the wind, which was considerable, while mending their webs, capturing prey and doing other such spiderly chores…95 stories, or more than 1,000 feet in the air!

At the time I wondered how the heck the spiders got up that high. One thousand feet is nearly 1/5th of a mile. That’s quite a hike for a creature barely an inch in length, including the legs.

That’s where the magic of ballooning comes in.  Spiderlings-even older spiders, from time to time-use this method of transportation to leave one area and arrive at another.

Ah, but there’s a hitch.

Rather than dictating their destination by controlling their silk, spiders are at the mercy of the winds. On a still day they may move a few yards. But when the winds pick up, spiders can move hundreds of miles. That’s how spiders ended up way up on the Hancock building, as well as remote destinations like islands in the middle of nowhere.

The key to a long-distance moving adventure lies in that marvelous silk. While it is inclined to stay straight in calm winds, it contorts and forms a parachute-or balloon-of sorts when the winds pick up.

I don’t know if you’ve noticed, but we are in the midst of ballooning season. I’ve seen random web fibers all over the place, likely the production of young spiderlings taking off to find their fate.

The next time you’re struck in the face by a length of spider silk, don’t panic. Think of the little spider that made it, and how s/he has embarked on a wild and potentially perilous journey, a balloon ride for one, with no waiting. Up, up and away!