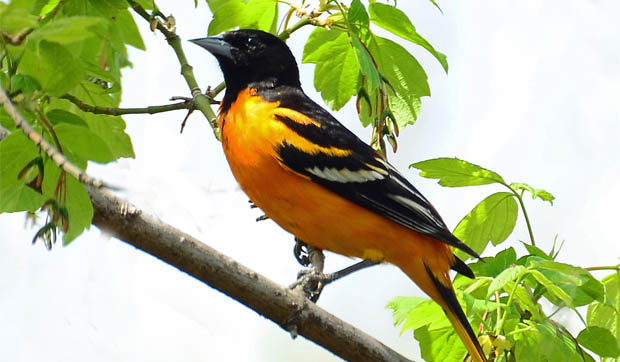 Good things come to those who wait… Look and listen for Baltimore orioles along waterways and woodland edges throughout Kane County. The bright colors of the male blend in among the trees surprisingly well, but the birds’ rich songs (females sing too!) can be heard even if the individuals can’t be seen. (Photo Credit: AcrylicArtist on morguefile.com)

Do you remember the first time you saw a Baltimore oriole?

For me the memory is clear as day. I was in the backyard of my grandparent’s house in downstate Atterberry (which, not so coincidentally, is my mother’s maiden name) and noticed what looked like baseball missing its cover, hanging in her tree.

Having recently discovered what the inside of a baseball looks like, courtesy of our overzealous Labrador retriever Polly, all I could think of was, “What the heck was Grandma doing with a baseball, and how in the world did she get it stuck up in that tree?”

When I asked her my questions, Grandma explained tenderly, as only grandmas can, that I wasn’t really looking at a beat-up  baseball in a tree, but rather the nest of a bird she described as the “most beautiful bird in the yard”-the Baltimore oriole. She also said that if I were to sit quietly enough, for long enough, I just might be able to see the handsome bird with the bold orange and black markings, or his lovely mate, whose own yellowish-orange and brownish markings were striking in their own right.

Whether Grandma really wanted me to learn more about the bird, or whether her challenge was just a gentle way to get me to sit down and stop talking, I’ll never know. But whatever the reason, her suggestion worked. I sat still, at the edge of the concrete patio, and stared up at the tree. Sure, I fidgeted a little; poked at some ants; found a few four-leaf clovers…

And then he appeared. His colors were so bright, at first I thought he must be someone’s escaped pet. But as I matched what I saw with the description Grandma had given me, I realized it had to be Mr. Baltimore Oriole himself. He didn’t head for the nest (it was August and he and his family were done with the woven “baseball”) but instead perched on a branch on the opposite side of his home tree.

From there the memory gets a little faded. I don’t recall whether he stuck around; I don’t even remember whether I stuck around. What I do remember is that the 10 hours, or maybe it was 10 minutes, I’d sat still felt like an eternity.

But the fact remained that that day, in that yard, in a town where the orioles quite likely outnumbered the people, I got to see, for the very first time, a bird that fascinates me to this day.

Since then I’ve learned a little bit more about the Baltimore oriole’s intriguing behaviors. The nest, for example, is woven from all manner of long-fibered materials-grass stems, strips of grapevine bark and plant down, as well as those items we wrote about a few weeks ago-fishing line, streamers and dental floss.

Nest placement typically is near the end of branch, such that they sway pendulously in the breeze and are pretty easy to locate, even when the trees are fully leafed. The home tree also tends to be near resources the orioles hold dear-insects, and fruit. Around here, look for nests along creeks and the Fox River, as well as near stands of American elderberry and red mulberry.

Oh, and grapes. Looking back, it makes perfect sense that Grandma had orioles in her backyard. Along the back edge of the lawn, a few feet before a sea of corn began, Grandpa had built a long arbor that grew some of the plumpest, juiciest grapes around-a buffet the orioles surely visited regularly.

Grandma used those grapes to make jelly-a food that, though not naturally occurring, is nonetheless another oriole favorite during spring and fall migrations. But now that we’re nearing the end of spring movements, the Baltimore orioles that will stay here for the summer will be in search of protein-rich insects they’ll use to nourish themselves and their offspring. They forage in trees, not in the air, and do a great job of helping control populations of tent caterpillars, gypsy moths and fall webworms. To increase the chance of orioles nesting nearby, some folks offer dried mealworms at their feeders.

As an alternative, you might want to take spin over to Hickory Knolls. We have elderberry bushes, mulberry trees, grapevines, caterpillars…and orioles! I haven’t quite pinned down where they’re building their nest, but we’ve been hearing their luscious “Here, here, come right here, dear” songs in the oak trees behind the nature center.

Take a seat on one of the benches by the fire ring, tune in your listening ears, and keep your eyes trained on the branches of the oaks. I guarantee you’ll hear, and maybe even see, the handsome bird with the bold orange and black markings, AND his lovely mate-if you sit quietly enough, for long enough…