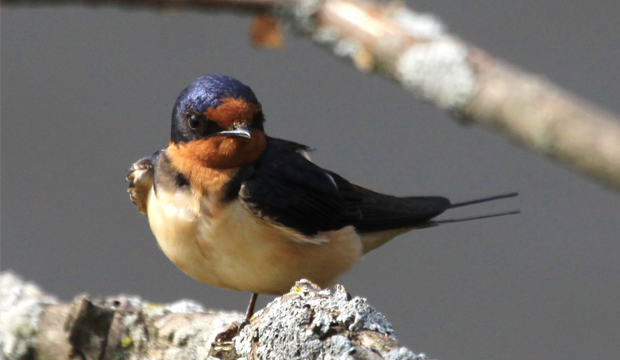 A barn swallow rests on a lichen-covered branch. (Photo courtesy of Bob Andrini)

The neighbor’s kids were out the other day, chattering excitedly as they soaked up some summer sun. It was snack time – seems like it’s always snack time with these guys – and the four of them jostled each other as they gathered together and waited expectantly for their treats to arrive.

Finally Mom, or maybe it was Dad, or possibly an older sibling (the family resemblance is strong in this bunch) showed up with a little nosh, and the ravenous quartet went absolutely nuts. The little guy closest to me made a grab, but the prize – something with wings – went to one of the youngsters in the middle.

Mom, Dad, whichever, took off again almost immediately, leaving the youthful clan seemingly unattended. But it wasn’t long before another wriggly meal arrived and was stuffed down a gaping gullet.

I suppose now’s just as good a time as any to mention that the four kids, lined up along a branch near the garden plots at James O. Breen Community Park, are a little more than three weeks old, not counting the time they spent in their eggs. I should also probably point out that they’ll be leaving, very soon, on a journey that will take them as far away as South America.

And, yeah, I guess I should also mention that our spirited neighbors are barn swallows.

If you happen to live near water, or in an area that is or was open farmland, chances are you have barn swallow neighbors too. These gregarious birds, named after their propensity for nesting in barns, build their mud nests under the eaves of sheds and houses, on porches, under bridges … If it’s a sturdy structure and has lots of insects flying nearby, it’s a good home for barn swallows.

Historically, barn swallows nested in caves – a geologic feature that’s in short supply here in northeastern Illinois (with the notable exception of  Devil’s Cave in North Aurora, which plays host to thousands of school kids, and a pair of northern rough-winged swallows, each year).

But humans provided the birds with a whole new range of options for nesting. Native Americans’ summer longhouses were among the first manmade structures Hirundo rustica found to its liking. Then, along came the European settlers, and the barn swallow’s life history changed forever.

As our country colonized, log cabins and houses sprang up, and soon were followed by the buildings that gave the birds their common name: Barns! Horse barns, dairy barns; prairie barns, round barns… the purpose or style didn’t matter. What was important to the birds was this new source vertical surface area. They could affix nests of mud and grass to their hearts’ content.

Farmers for the most part didn’t mind as the swallows provided free and effective insect control. Even better, for the birds, they were able to rear their young in relative safety as predators tend to shy away from places people populate.

By aligning themselves with what is arguably the world’s most invasive mammal, barn swallows have become the world’s most abundant swallow species. They breed in North America, Europe and Asia and overwinter in Central and South America, Africa and even northern Australia. Population estimates put their numbers at around 190 million.

That’s a lot of barn swallows. And, while some folks may feel otherwise, I think having a lot of barn swallows is a good thing. They eat bugs by the bazillions. They’re fascinating to watch. They build mud nests with their mouths – no hands required. And, for all you beginning birders out there, they’re easy to identify. No other swallow species has a long, v-shaped, scissor-like tail like that of the barn swallow.

If you haven’t done so already this year, try to put some time aside to head out to a nearby barn swallow-viewing site. The athletic fields at James O. Breen are good, especially if the mowers are out and churning insects in their wake. Pottawatomie Park, by the Paddlewheel Riverboats, is another great spot to stand, or sit, and watch the birds and their aerial antics.

But don’t wait too long. South America is a long way away and, even now, the swallows are gathering in preparation for their trip. If you miss them you’ll have to wait another seven or eight months before they’ll be back again. To go that long without a glimpse of one of our most entertaining summer visitors… that’s a prospect that’s hard to, well…