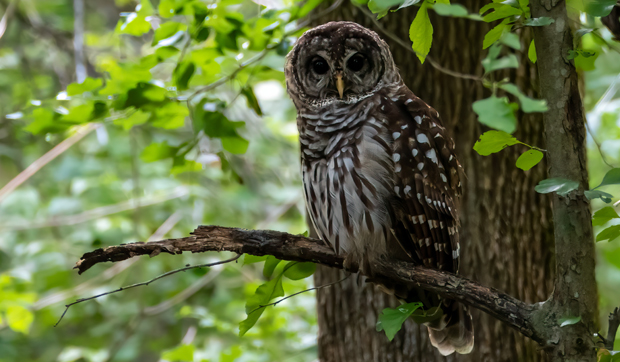 Once rare in Kane County, barred owls are showing up with increased frequency in mature woods throughout the area.

The other day I headed out to meet some friends for a walk at Tekakwitha Woods Forest Preserve, with a plan to proceed over to Jon Duerr FP on the other side of the Fox River. All in all, a pretty ordinary plan for our little group of nature nerds, on a pretty ordinary spring afternoon.

The walk even started in ordinary fashion, at least for me. Running late, I texted the group that I would meet them at the bridge over the river. I had my young dog Boeker with me, and figured he and I could power walk down the Fox River Trail while our friends strolled leisurely through the woods.

Bo and I stayed on task pretty well at first, but then he found something he just had to roll in, and I found an interesting burrow I just had to check out. From there on our pace slowed considerably as we made one discovery and then another. A dead shrew. Coyote scat. A vole nest, neatly constructed of short grasses and looking very much like an upside-down bird nest lying on the ground.

In fact it was this latter object that caused our forward progress to stop completely. Boeker wasn’t convinced that the nest was empty, and also wasn’t going to proceed without first sniffing every molecule of the surrounding area.

Ordinarily, I’d give a tug on his leash and urge him to get moving. Instead, though, I opted to practice some tree identification as I stood waiting.

Just that quick, our ordinary walk on an ordinary day had yielded something categorically out of the ordinary.

Not 20 feet away, on a branch maybe 10 ft. high, the gray-brown bird stared down at us with a look that seemed to say, “Really? A 65-acre preserve, and you had to stop here to sniff? Really??”

As if to emphasize its disapproval, the owl narrowed its eyes and fluffed its feathers. I looked away so as to not appear threatening, but the bird clearly had had enough. As I tilted my head slightly to sneak another peek, s/he flew on silent wings into the woods.

So quiet, and quick, was the whole encounter that Boeker didn’t even notice. While he continued his search for imaginary rodents, I stood there beaming. After years of searching, I’d quite accidentally seen my first Kane County barred owl.

Now don’t get me wrong. Barred owls aren’t super rare in this area, at least not any more. Since the mid-1990s anywhere from one to six have been spotted during each of Kane County Audubon’s semiannual bird counts.

I’ve heard them a few times in past in Kane County, at Johnson’s Mound and Blackberry Maples Forest Preserves in Elburn, and Bliss Woods FP in Sugar Grove. Their distinctive “Who-cooks-for-you, Who-cooks-for-you-allll” call is unmistakable.

I’ve also seen them in lots of other places, from nearby Will and DeKalb Counties to farther flung reaches like the Shawnee National Forest and Great Smoky Mountains National Park. But never had I locked eyes with Strix varia so close to home.

Finally persuading Boeker that there’d be other, possibly real, rodents farther down the trail, we started off once again on our trek toward the bridge and our friends. And as we walked, I pondered the enigmatic bird one of us had seen.

Historically, barred owls inhabited the forests that predominated across eastern North America. The birds preferred unfragmented habitat, ideally with some water-a pond, a stream, a swamp. But as landscapes changed-as forests in the east were cut down, and trees were planted in prairies and plains-S. varia adapted, and went on the move.

Although somewhat sedentary by nature-they are nonmigratory and often spend their entire lives within a 6-mile radius-barred owls nonetheless steadily advanced their range. They’re now in forests in the Pacific Northwest, as well as many points along the way.

They’ve certainly got what it takes to survive. One, they aren’t fussy eaters. Barred owl diets include the usual rodent prey, but also rabbits, birds, amphibians, reptiles and invertebrates-even fish and crayfish.

Two, while they have a preference for woodlands with old growth trees, it’s really the tree cavities that Mature woods that host a variety of trees, and a variety of prey, suit these birds just fine.

Three, barred owls face few threats. Sure, there are the risks that come along with living near humans-namely road mortality and accidental poisoning. But as far as natural predators, there aren’t many. Great horned owls, yes, and the occasional nest-raiding raccoon or mink, but that’s about it.

As we neared the bridge, Boeker still on vole patrol, I took one more glance back toward the woods where the owl had flown. The bird was gone, but would not be forgotten. Nor would this truly extraordinary day.