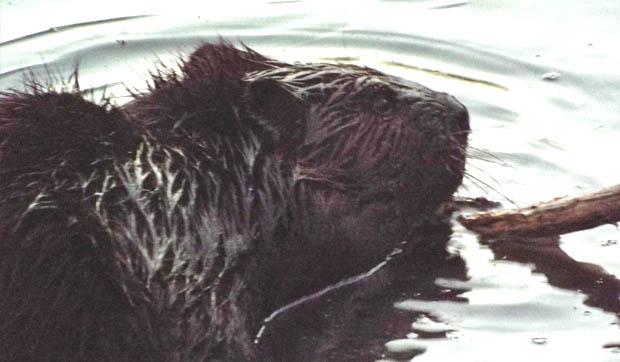 Photo Caption: Beavers have a reputation for busy, and right now that activity is nearing a peak. These mammals, the largest rodents in North America, are cutting and storing branches in caches that will serve as the animals’ winter food source.

When it comes to conversation, and newspaper columns, we all know that certain topics are sure to cause a stir. Politics is one, religion another. And then there is the subject of rodents.

Knowing this, and knowing the sorts of emails past columns on chipmunks and mice have generated, I’m nonetheless going to tackle the topic again. Or, maybe it’s better to say I’m going out on a limb. Let’s take on the subject our largest North American rodent, the beaver.

If you happen to live near water, whether it’s the Fox River, a tributary or a neighborhood pond, you’ve probably had dealings with these industrious mammals. Maybe they’ve discovered you have excellent “taste” in landscaping. Or perhaps they’ve toppled a tree in your yard, leaving a gnawed, pointy stump as their calling card.

Even if you don’t live by beaver habitat, you can certainly spot evidence of their presence. Take a walk along the river and it won’t be long before you see bare sticks floating in the water-a sign that someone has been snacking nearby. Contrary to popular belief, beavers don’t eat wood. It’s the tree’s nutritious inner bark that they’re after. The stripped sticks that are left behind are like the cobs that remain after you eat an ear of corn. (Also counter to what you might think, these sticks aren’t useless. I have one I use as a pointer during presentations, and another that’s made a dandy walking stick.)

Right now beaver activity is nearing a peak. Because they don’t hibernate, beavers need to store up enough food to make it through the winter months. Shrubs, saplings and small trees make up the bulk of the harvest. Cut into manageable lengths, they’re then toted and floated back home to be stored in food caches-pantries, if you will-next to the underwater entrance of the beaver’s lodge or bank den.

Over time, these branch buffets can grow to an impressive size-sometimes as tall as 6 feet-and include a wide variety woody plant species. Local favorites include river birch, maple, alder and, as one homeowner told me, “anything that costs more than $100 to replace.”

And then there are those oddball items. Last fall Laura McKinsey, 3rd grade teacher at Wild Rose School in St. Charles, took me on a walk along Ferson Creek to view an interesting cache that contained a whole lot of cornstalks. Given that the beavers’ bank den was adjacent to a cornfield, the stalks were certainly plentiful and, like French fries at a McDonald’s drive-thru, easy to access. I think it’s safe to say that convenience also plays a role in beaver’s cache-making choices.

Wildlife biologists have noted that beavers tend to place favored food items lower in the cache, then top off the structure with species less preferred-the beaver equivalent of planning to eat dessert first. But this top layer also serves an important function. Extending above the water’s surface, its protruding branches catch falling snow and create an insulating layer that helps keep water from freezing in and around the food; meanwhile, down below, cold water keeps the stored branches edible until spring returns.

Chewed trees are the most obvious signs of beaver activity. But if you happen to find yourself near a local body of water, see if you can spot some of these more obscure clues that beavers are about:

Bank dens. Fox River beavers do not typically build dams nor live in lodges built of sticks and mud; instead, they excavate dens in the river’s banks. Look for large piles of gnawed sticks at the water’s edge; a den entrance usually lies below.

Scent mounds. These are more common in spring than fall, but are cool nonetheless. Beavers use their scent glands, or castor sacs, to mark territories. A beaver will make a small mound of mud and twigs, then anoint it with castoreum. If you spot one, sniff it.  It’s a smell that’s hard to describe but, believe it or not, is not unpleasant.

Tracks and scat. Good luck with these! Both are tough, but not impossible, to find. Beaver tracks often are obliterated by the animal’s large, flat tail but can sometimes be found in soft mud or fresh snow. Front and hind feet have five toes each; the webbed hind feet may measure 6 or 7 inches in length.

Beaver scat is even harder to spot, for two reasons. One, beavers usually “go” in the water, where it breaks down quickly and is washed away. Two (or shall we say “Number Two?”) beavers will “recycle” certain scat by eating it again.

In my book, traits like these catapult beavers beyond the category of just ordinary rodents, into the realm of extraordinary. Love ’em, or hate ’em, beavers play a vital role in our local Fox River ecology.