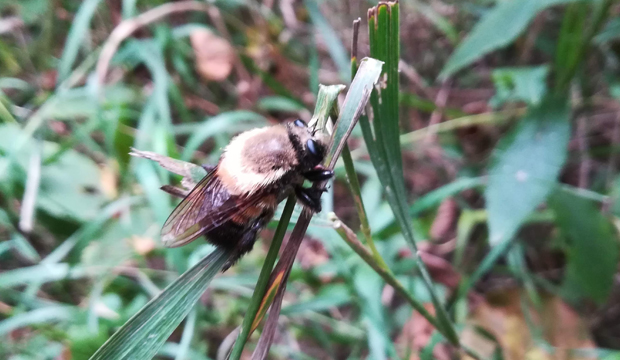 It looks like a bee, but the large eyes and short antennae, as well as one instead of two pairs of wings, identify this insect as a bee-like robber fly.

Oh, bees. We think we know them, but do we really?

A couple of recent incidents reminded me that bees-that familiar group of herbivorous and mostly peaceable pollinators-often get blamed for things they had nothing to do with.

The other day I received a text that read, “Are bees that make hives underground pollinators, or useless contributors to society that can be exterminated?”

Hoo boy. Lots of layers to that question! Aware that my clumsy paws make for slow, laborious texting, and that it would take most of the afternoon to text descriptions of the dozens of solitary (read: not likely to sting) ground-nesting bees that inhabit our area, I opted instead to focus on the bumblebees-our largest ground-nesting bees that also happen to live in colonies (read: more apt to sting because they’re protecting their extended family).

But even as I explained that bumbles are most definitely helpful pollinators that might get defensive if their underground home is threatened, I knew in my heart that what prompted the original text wasn’t bees at all, but rather yellowjackets. Having spent spring and summer growing their numbers, these wasps are everywhere at this time of year. They also sting first and ask questions later, making them responsible for the majority of “bee” stings that occur in late summer and fall.

I wrapped up that text conversation by noting that skunks do a really good job of eradicating yellowjacket nests and do so without the use of toxic chemicals that can travel beyond their intended targets. The only catch is you can’t call to schedule an appointment and, while most neighborhoods have at least a skunk or three, their tastes are fickle. If another food source like, say, cat food in a dish on a porch is available they’ll likely opt for it instead.

That text exchange is but one example of the very common practice of using the words “bee” and “wasp” interchangeably. It happens all the time, yet is somewhat akin to confusing brown bears with bison. It’s true, many wasps and bees display yellow and black markings. Yet wasps hunt insects to feed their larvae, while bees provision their offspring with pollen and nectar. And while I don’t have hard data to back it up, my gut says that wasp stings outpace bee stings, due in large part to yellowjackets’ tenacious defensive tactics.

But you know what else adds to bees’ identity woes? Flies. We are surrounded by sooo many species of flies that look like bees.

There are the Syrphidae, also known as hover or flower flies. And the Bombylidae, or bee flies. (Their name comes from their habit of parasitizing bees but, doggone it, many of these flies do indeed look like bees themselves.)

Then there are the Asilidae, or robber flies. This diverse group of predators includes a number of species  that are so bee-like that they can fool photo-identification apps like Seek, Picture This and Google Lens. They’ve also been known to hoodwink a naturalist or two.

I’ll admit, the first time I saw a robber fly in action, in 2007, I thought it was a bumblebee. I would’ve been satisfied with that identification were it not for the fact that this “bee” was attached to the side of a periodical cicada. And by attached I mean locked in a death grip, stabbing its beak-like mouthparts into the hapless 17 year old and rendering it helpless.

A bee? Feeding on a cicada?? It didn’t make any sense at all. It wasn’t until later that afternoon, steeped in entomology books, that I learned a little bit about this amazing family of predatory flies… How they perch within their hunting zone, using their large eyes to scan for prey; how they inject captured insects with saliva that contains both toxins and digestive enzymes; how they slurp the liquefied innards, then return to their perch to hunt again.

Since that day I’ve double-checked pretty much every bumblebee I come across. Perched on a flower, probing for nectar with a tongue and/or stuffing pollen into their corbicula, a.k.a. pollen baskets? Definitely a bumble. Perched on a plant but not actively feeding? Might be a bumble, but also might not.

Just last week that checklist ran through my mind as I was out for a walk with some nature-loving friends. We’d come upon a pudgy insect clinging to a blade of grass. It was fuzzy, with a yellow thorax and faintly striped black behind-basically every characteristic needed to be a bee. Yet something wasn’t quite right.

The antennae were too short; the eyes too large. The behavior was odd too. A sunny, warm day perfect for gathering pollen and nectar, and this character was hanging out on a broken-down blade of grass.

I’m pretty sure the individual we found is in the genus Laphria-a group also known as the “bee-like robber flies.” While I wasn’t able to pin the ID down to species, I did learn that Laphria is an epithet of Artemis-the Greek goddess of the hunt. The genus includes 62 species, several of which occur in Illinois. Their diet consists of flying insects, including other robber flies and, dare I say it? Bees.

The next time you witness insect activity in your yard, and the participants are black and yellow and quite familiar, look a little closer. Is it two bees? Or not two bees? That is this week’s Good Natured question.