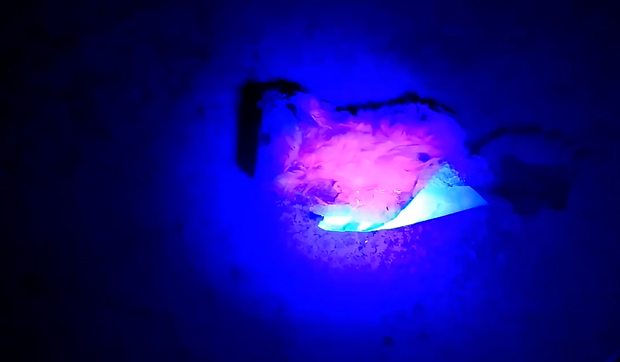 Photo Caption: Absorbing light from one part of the spectrum and emitting it as another, this flying squirrel glows bright pink under an ultraviolet beam.

Good Natured: Biofluorescence – Does It Glow?

I would imagine that our recent spate of 40-something degree weather has most of us aglow with the prospect of warmer temperatures and, dare I say it, spring!

But you know what else is glowing these days? I’ll give you a hint: It’s nothing new. But as scientific discoveries go, it’s fairly recent. Plus it’s oddly fascinating. And fun!

What we’re talking about today is the phenomenon of biofluorescence-that is, plants and animals that absorb the energy from a light source, and then re-emit it at a different wavelength and therefore color.

I became aware of this most intriguing curiosity last fall when someone shared an article from the New York Times’ Trilobites feature, which focuses on “fascinating morsels of science.” The bulk of the piece covered fluorescing platypuses-animals that, while interesting in their own right, have little chance of intersecting with our daily lives here in northern Illinois.

But the article also described how the inspiration for checking out platypuses, or platypi, actually stemmed from a discovery by Jonathan Martin, PhD, an associate professor of forestry at Northland College in Ashland, WI, who noted that flying squirrels fluoresce bright pink under black light.

At that bit of news a lightbulb-bright white, not black-went off in my head and I made a veritable beeline for the chest freezer we have in the basement at our Hickory Knolls Discovery Center. Digging through the layers of nature we’ve amassed over the years-a roadkill screech owl, assorted moles and shrews, a young roadkill fox snake, to name a few-I eventually arrived at the stratum associated with 2012.

That year, you might recall, was warm and very, very dry. A number of wild creatures perished and were brought to our door, including Glaucomys volans, a southern flying squirrel. (I tell you, that little animal may have had only a year of two of life but it has lived on in nature programs ever since. We’ve used it for teaching about nocturnal animals, non-powered flight and rodents, as well as just showing people that yes! We do have flying squirrels in our area, and they’re really not that uncommon.)

At any rate, I set the squirrel on the floor, turned off the lights and, using a black light borrowed from a program supply bin, scanned the body from top to bottom.

No joke, the colors that emitted from that body were some of the richest, deepest, brightest pinks I’ve ever seen. I took a few photos, made a quick video and also made plans to acquire my own black light ASAP.

Since that day in November, biofluorescence has consumed a disproportionate amount of daily life. (Make that nightly life. It’s easier to achieve the necessary darkness after the sun goes down.)

In the office or at home I play a game called Will It Glow?, hitting various objects living and dead with the ultraviolet beam. What’s added to the fun is inviting friends to play too.

When my friend Valerie came upon a dead opossum I urged her to look at it under black light, as I’d read that opossum fluoresce a “rainbow” of color. I wasn’t able to be present during her investigation but experienced it the next best way-via cell phone with texted photos. I felt like I was listening to fireworks spectator as she oohed and aahed over the pinks and purples in the fur, and I got just as excited as she did when her beam scanned the claws and they emitted a wonderful chartreuse. (I was walking through downtown Geneva at the time, and am fairly certain the woman I was standing, socially distanced, near at a stoplight leaned even farther away when I let out a “Yeep!”)

These days fluorescing animals have become a semi-regular feature during our weekly Good Natured Hour online program (visit https://stcparks.ticketleap.com/goodnatured/ if you’d like to join the fun!) and what we’ve learned is that researchers in a number of scientific disciplines are exploring the phenomenon. Rehabilitators at the New England Wildlife Center in Weymouth, MA, are using black lights to age owls brought in for care (porphyrins, or pigments, in feathers degrade over time, causing a reduction in fluorescence in older birds). And a team of scientists led by Jennifer Lamb, PhD, at St. Cloud State University in Minnesota are looking into the role fluorescence might play in amphibian ecology.

As Dr. Lamb explained during a recent webinar, the bright colors she’s observed on salamanders, frogs and tadpoles might play a role in intra- and interspecies communication, serving to attract a mate or repel a predator with warning coloration. The biofluorescence might also aid in camouflage, especially when hiding among items like tree leaves or lichens that also fluoresce.

But Dr. Lamb and others are also the first to admit that all this fun might be just that, a funny quirk that carries no biological or evolutionary significance. That’s not stopping her, and it’s not going to stop me either. As the weather warms, I’ll be out and about with my black light, looking for things that glow in the night. And now, maybe you will too.