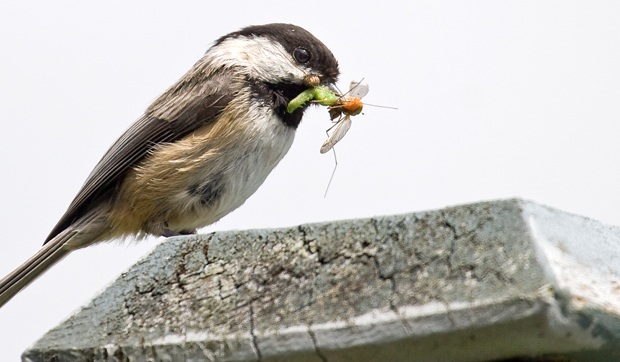 A chickadee gathers insects, including a caterpillar and a crane fly, to feed itself and its brood. Native plants and reduced pesticide use can help ensure chickadees and other common birdfeeder species find the foods they need without increasing their risk of exposure to avian flu.

Call it what you will, but this latest virus making birds sick has been making headlines for weeks now…not unlike a certain other virus that changed our human lives two years ago. And just like back then, we seem to be getting a lot of conflicting information.

On April 20, the Cornell Lab of Ornithology’s All About Birds, a trusted and popular online guide to birds and birdwatching, released an article saying that while raptors, waterfowl and certain shorebirds have been affected, the risk of an outbreak in songbirds was low; the article added that at that point in time, there was no official recommendation to take down birdfeeders unless domestic poultry were also present.

Ah, but then the very next day the Illinois Department of Natural Resources issued the following:

“While HPAI has not been detected in songbird species (passerines), IDNR recommends the use of bird feeders and bird baths cease through May 31, or until HPAI infections in the Midwest subside, especially those that waterfowl may visit. During spring, wild birds will have ample food sources while bird feeders are removed.”

So what’s a bird lover to do?

I was pondering this important topic the other morning as I watched a chickadee on my deck. It had landed by the brackets for the birdbath that’s normally mounted there, but which I had taken down the week before-mainly because I was going to be gone a few days and wouldn’t be able to give it its usual daily scrub. That was right after more than 200 cormorants were found in Barrington, and concerns about bird flu were on the rise.

I’ve kept the birdbath inside ever since and have undergone periodic waves of guilt, but have reassured myself that if there’s one thing we’ve had plenty of this spring, it’s water.

I poured another cup of coffee and watched the chickadee fly off. It didn’t go far, just to the elderberries on the south side of the yard. There, perched near the top of one of the bushes, it picked at the rain-wet leaves that are starting to unfurl. Was it getting a drink? I think so!

Sipping my coffee, watching the chickadee and thinking about IDNR’s recommendations (a lot for me to handle, especially early in the morning) I came to realize how nature’s ways really are the best. That little bird, sipping from the droplets caught in the crown of a branch, isn’t drinking water other birds have used for bathing, or worse. It wasn’t surrounded by other birds that may or may not be harboring the bird flu virus-or conjunctivitis, or bird pox, or any other pathogens or parasites.

As the chickadee flew off to forage for food, it didn’t go to the neighbors’ feeders, it went to the end of a silver maple twig and poked about for insects sheltering there. Once again, it was the only bird in the vicinity-social distancing at its finest.

I know we like to think that our offerings of food and water are helping our bird friends-and they probably do. But are they essential? Probably not. Chickadees do frequently come to feeders but, as Cornell’s All About Birds describes, “In spring, summer, and fall, insects, spiders, and other animal food make up 80-90 percent of their diet.”

They aren’t the only birds who switch to a mostly-arthropod diet while raising the kids. Nearly all our of our local songbirds seek caterpillars, beetles, crickets and more to provide the nutrients they need at this busy time of year.

You can’t load a hopper or a tube or a platform feeder with insects and spiders, but you can plant true species native shrubs and wildflowers that will host those essential, protein-laden creatures and, later, fruits and seeds. Don’t have a yard? A container planted with a mix of natives will help too, offering just the sort of nectar, pollen and foliage that our area’s arthropods require.

Even better, those natural food sources will allow birds to feed in a safer fashion. Instead of congregating on a feeder-a sight that delights us humans but, let’s face it, is a great way to spread germs-individuals find a bounteous buffet of caterpillars, flies, crickets and more, all while avoiding close contact with other birds.

As my backyard chickadee continued its way about the yard, picking off bugs here and there, I admired its diligence and its skill, and its ability to survive with no help from me. At a time when information is conflicting, its actions spoke loud and clear. Thanks for the clarity, little chickadee!