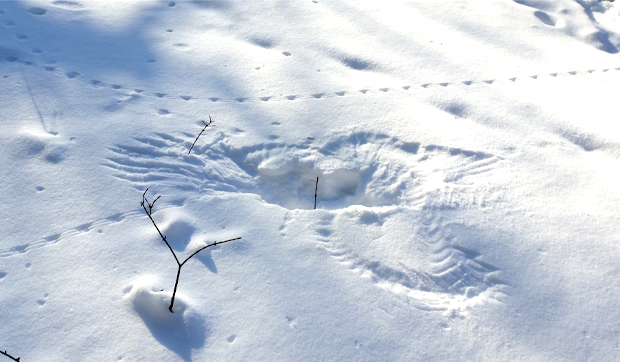 Photo Caption: The rodent tracks that begin at left and end beneath this ‘snow angel’ indicate a bird of prey was successful in its hunt. Photo courtesy of Margaret Gazdacka

Every year about this time, the Good Natured World Headquarters staff starts fielding questions about tracks in the snow. And every other year or so we-well, actually, I, as the budget here at World Headquarters good naturedly allows for a headcount of one-put together a column or two on differentiating between the various marks and signs.

Overwhelmingly, these tracks originate from the feet of mammals. With the warm-ish winter we’ve been having, even animals that tend to den up at this time of year, like opossums and skunks, have been making night-time forays and leaving footprints in our sometimes fluffy, sometimes slushy snow.

But occasionally-and by occasionally I mean, like, twice in the past 13 years-we receive a query about bird sign in snow. In both instances lucky hikers came across the stunning imprints of bird wings, left behind when a bird of prey dove down and snagged a meal.

These avian “snow angels” are the creme de la creme of bird sign, not so much because raptors are rare but because the snow conditions needed are somewhat specific. The icy, crusty snow we had a few weeks ago isn’t good, but the wet snow that fell recently was just right. Add in an element of timing-early morning, before wind and tracks from other wildlife take their toll-and you’ll definitely up your chances of finding one of these winter tracking gems.

Wing imprints are awesome, for sure, but they are by no means the only signs birds leave behind. Next time you’re outdoors, keep an eye, or ear, out for:

Tracks: With more than 250 birds known to occur in Kane County, describing the tracks of each would be featherbrained, to say the least. However, there are a couple of neat things you can look for if you happen to see tracks of passerine, or perching, birds in the snow.

These birds leave what is referred to as the “classic” four-toed bird track: three toes that point forward and one that points backward. Many of these species, like blue jays, goldfinches and juncos, hop, and the prints they leave behind are side by side, in pairs.

Some passerines, however, skip instead of hop. These species, which include snow buntings and white-breasted nuthatches, place one foot down, then put the other down slightly ahead of the first.

You have to be pretty dedicated to follow these small tracks and distinguish between the two gaits. But if you do, you’ll gain a sense of satisfaction in knowing the difference. And you also be another step closer to becoming a full-fledged nature nerd. (If you do reach this echelon of eco-geekdom and want to learn more-lots more-an excellent reference is Bird Tracks & Sign, A Guide to North American Species by Mark Elbroch and Eleanor Marks. At 456 pages it’s extremely comprehensive; it’s also the only book I know of that has tackled this topic.)

Songs and calls: Although spring has not yet sprung, some birds are already declaring their territories through song. The other day while I was shoveling I heard the clear, two-note whistle of the black-capped chickadee (“Spring’s here!” supposedly are the words you can apply to this song. If only!)

The bird calls I always pay attention to, whether it’s winter or not, are the persistent caw-caw-caws of the American crow, as well as the jeers of a group of blue jays. These birds regularly conduct their own neighborhood watch programs and alert others to potential threats. If you track down a group of calling crows or jays, you might be rewarded with the sight of a roosting hawk or owl. (You’ve also found an area worthy of checking for those winged snow angels too!)

Whitewash and pellets: Speaking of owls, the roosts they frequent often are bedecked with a glaze of white. Looking somewhat like white candle wax and fancifully known as whitewash, these markings are the chalky, uric acid components of the bird’s waste. If you find a tree-often a conifer-with whitewash, be sure and scan the ground underneath it for pellets. These oval-shaped blocks contain the fir, bones, claws and other indigestible bits of the owl’s last meal.

(Fun fact: Although owls are the most famous pellet producers, many other bird species, including eagles, hawks, crows and gulls, eject inedible matter in this way too. Because these birds consume diets vastly different from one another, their pellet sizes and contents will vary widely too.)

Nests: Winter is a great time to survey the empty nests in your neighborhood to see who your warm-weather residents might be. Each species makes a specific sort of nest, sometimes even using species-specific materials and/or locations. If you find one you’re curious about, send a picture to Good Natured World Headquarters and we-I mean I-will try and get you an answer. As an alternative, the Peterson Field Guide series includes a volume on bird nests that is a worthy investment if bird nests are your thing.

Piles of feathers: This sign actually is an indication of two bird species-the feathers can help you figure out the prey species, and the pile itself will tell you that the bird was taken by a hawk. Cooper’s hawks specialize in feeding on birds and are the most likely “suspect” but this time of year sharp-shinned hawks are a possibility too. Both species pluck their prey on the ground before consuming it.