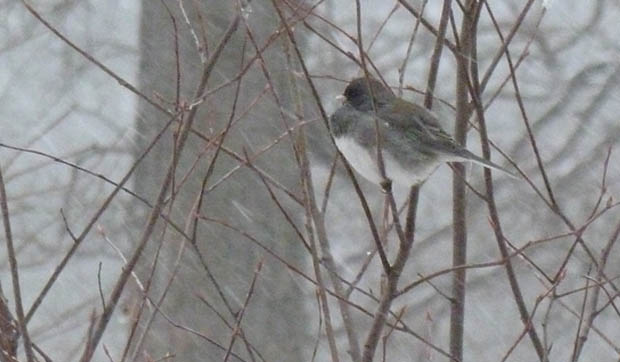 Photo Caption: A dark-eyed junco at Hickory Knolls braves the elements with its feathers fluffed out, a tactic that helps improve insulation from the cold.

This latest weather blast has me thinking of winters gone by, particularly those of my childhood. Back then, girls weren’t allowed to wear pants to school unless it was winter and you lived a mile or more away from the school.

Since we lived just across the street, I spent many a day envying my friends who got to walk a mile or more in the cold, while also wondering if the exposed skin between the bottom of my little pleated skirt and the top of my knee socks would get frostbite. (And, if it did, would everyone want to see? Would my knees be famous? Would I be elevated to the status of tragic playground legend, just like the kid that supposedly fell off the fire escape and landed on the bike rack, which is why it was dented?)

My point is, exposed skin in sub-zero cold is an unpleasant but undeniable fact of winter life here in northern Illinois. We humans have our ways of coping (using our vivid imaginations, for instance) and our wildlife neighbors have theirs.

Take birds, for instance. They have exposed knees too, but even in the worst weather are usually only a little worse for wear. A magnificent set of physiological adaptations protect birds from extreme conditions in winter, and throughout the year.

Feathers are a great example. Birds are gifted with several different types of feathers, each of which performs its own function. Contour, or exterior, feathers, function like the shell of a winter parka, shielding the bird from elements like wind and rain or snow. Semiplumes help contour feathers keep their shape, and filoplumes perform a sensory function that helps birds with preening.

Then there are the down feathers. Humans know about the insulating qualities of down via our down-filled coats, but for birds down is the equivalent of long underwear. Situated between the contour feathers and the skin, down feathers trap warm air close to the body and insulate against the cold.

Birds are able to manipulate, or fluff, their down and contour feathers, thus allowing a measure of temperature control. When a bird looks “puffed up,” it’s fluffing. Fluffed feathers have nearly twice as much surface area, and insulate nearly twice as well.

Another amazing avian adaptation concerns those bare knees. Birds’ legs stay protected in winter, not with knee socks and pleated skirts, but rather through an internal innovation called counter-current circulation.

During this process, arteries that carry warm blood from the bird’s body into its legs divide into many smaller vessels, as do the veins that carry cooled blood from the legs back to the body. Heat passes between these smaller vessels, cooling the “outgoing” blood and warming the “incoming” blood, thus helping to minimize heat loss via legs and feet.

Birds further conserve heat loss by restricting blood flow to the legs, standing on just one leg, or perching so that their feathers cover their legs and feet. They take advantage of cover where they can, and aren’t opposed to huddling (or, for you romantics, cuddling) to keep the cold away.

Another tactic birds use, that we humans tend to shun, is to shiver. Shivering creates heat and, as long as the bird consumes sufficient calories to fuel its muscles, can be an effective strategy for surviving long cold winter nights.

The next time an arctic blast comes our way, take a look at your bird neighbors. If they’re out at all, you’ll notice that most are positioned so that they’re facing into, rather than away from, the wind. This strategy keeps the wind blowing over, rather than under, the contour feathers, and helps prevent cold air from reaching the skin.

And therein lies a winter coping strategy we all can use: When temperatures are low and the cold winds blow, try not to let the weather ruffle your feathers!