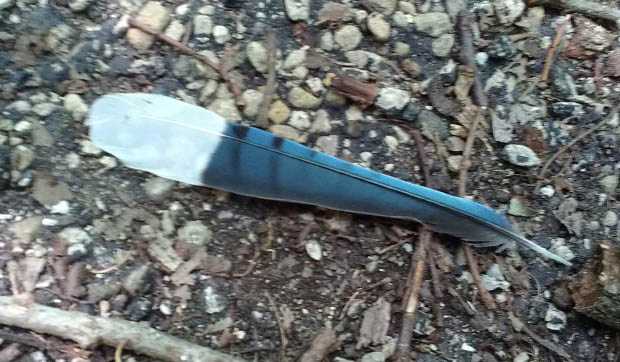 It may be summer for us, but for birds it’s molting season. This blue jay feather is just one of many spotted on a recent walk around St. Charles.

Birds of a feather – it’s time to molt

In Ecclesiastes we learn that everything has a season. A time to be born, and a time to die; a time to weep, a time to laugh, and a lot of other daily and/or annual events. A couple of millennia later, Pete Seeger and then the rock group The Byrds immortalized the words in the song Turn, Turn, Turn.

As a naturalist, though, I would be remiss if I didn’t point out that there are lots of other Byrd, I mean bird, seasons not commemorated with lyrics. A time to nest, for example, and a time to raise young. A time to fledge, a time to preen. Then there’s the season we’re in right now – the time to molt, or replace old worn – out feathers with new ones.

I don’t know if you’ve noticed lately, but there are feathers everywhere, and not just because a Cooper’s hawk recently feasted. The other day I was walk along the Fox River and noticed dozens of duck and goose feathers, on land and on the water. In fact, in the past couple of weeks, I’ve also come across a feather from a downy woodpecker, from a mourning dove, a cardinal and a blue jay.

Feathers not only define what birds are – they are the only animals that have them – but they are essential to bird survival. Well-groomed outer, or contour, feathers provide protection from rain and snow while inner down insulates against heat and cold. Without feathers, a bird’s goose would be cooked.

But, let’s face it, feathers don’t last forever. At some point they need to be replaced, either one at a time, like most of our perching birds, or in large clumps, like waterfowl.

Most birds molt at least once and sometimes twice a year, depending on habitat and the amount of wear and tear the feathers sustain. Also, depending on species, late winter/early spring molts may produce the bright breeding plumage we so often associate with the coming of warmer weather.

A molt typically proceeds sequentially in sections across the bird’s body. But it’s neat to see that even this process has adaptations depending on a species’ needs. Take woodpeckers for example. They have a pair of long, stiff feathers at the inside center of their tail. These feathers help the bird brace itself against trees as it pounds away foraging or creating a cavity. If they were to fall out first, the bird would lack the support it needs for these vital activities. Instead, woodpeckers retain these feathers until all the other tail feathers have been replaced, which is opposite of the sequence displayed by most other birds.

In a marked exception to the one-section-at-a-time approach to molting, we have the waterfowl-ducks, geese, swans, pelicans etc. These guys face a bit of a conundrum when it comes to losing feathers. Being heavy bodied, the loss of even a few wing feathers renders them flightless.

So these guys have adapted to a process known as synchronous molting. Feathers come out, not all at once – no bird wants to be completely naked, even in the midst of summer’s heat – but rapidly and throughout the body. During this period they can’t fly, and tend to stick close to water, their safe haven.

Whereas “typical” molts typically take six to eight weeks to complete, synchronous molters can get the job done in as little as two weeks.

Whether it happens quickly or over the course of a couple of months, once the molt is complete it’s time for birds to return to their feather-maintenance regimen. These tasks include daily preening, which may involve the use of oil glands or, in some species, powder down feathers that crumble into a grooming “dust;” bathing, even in winter; and, sometimes, working items like black walnuts or ants through the feathers as a means of pest control.

As The Byrds sang, there’s a time to gain and a time to lose. When it comes to bird feathers, that time is now.