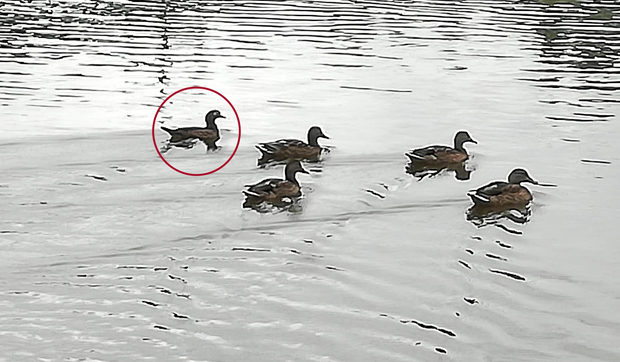 Photo Caption: Birds of a feather don’t always flock together, a fact that makes birding even more fun. One of these ducks, circled, was not like the others paddling the river at Pottawatomie Park in St. Charles.

Good Natured: Birds of a Feather

As fall migration continues, it’s time once again to play that favorite game of birdwatchers and Sesame Street watchers alike: One of These Things (Is Not Like the Others).

During the summer breeding season, many birds in our area stay with their family units. Then, as the weather starts to cool, they expand those family ties to include other members of their kind in groups called flocks. But that old saying about birds of feather flocking together? It’s not always true. And that’s what makes the game fun.

All you need  to play is patience and an eye for detail. Binoculars are helpful, but not necessary. The goal is to find a group of birds, then see if they all match. If you spot an outlier, bingo! You win. Bonus points ensue if you can identify the strange bird, and fame follows if the bird is considered rare.

You might remember the rounds we played a few years ago, when alert birders spotted snow geese and tundra swans among the Canada geese that blanketed our winter landscape. All it took to get those sessions started was someone thinking, “Well looky here! Some of those birds are big and white, instead of big and brown and black.” It didn’t take long for that news to spread among the birding community and for those of us who came late to the game, all we had to do was look toward where the spotting scopes and camera lenses were pointed.

I need to confess, the game can be somewhat addicting. And you don’t always “win.” Last week I started scanning the flocks of Canada geese that have formed, but have yet to see anything out of the ordinary. (Although I should note…amateurs like me have a really hard time distinguishing between the different subspecies of Branta canadensis. Are all the geese we’re seeing these days the same subspecies? No. But they’re so similar I can’t tell them apart.)

Besides big white birds among the geese, it’s also fun to look for small birds that look just like their larger canadensis cousins. These geese, which some folks mistake for youngsters that are still growing, are cackling geese, B. hutchinsii. For years they were considered yet another subspecies of canadensis but in 2004 received full species status. Definitely give yourself a point if you can pick out a cackling goose.

The other day I was at Pottawatomie Park in St. Charles, a spot that has both geese and ducks in abundance right now. As I walked along I was playing the birder’s version of Duck, Duck, Goose (mature female mallard, mallard hybrid, mature female mallard, Canada goose…) when I did a double take. One of those ducks was very much not like the others!

There amid the mallards was a female wood duck. I wasn’t sure at first as the lighting was poor. Plus, I wasn’t even playing One of These Things. But sure enough, the crested head, smaller bill and white eye ring were visible enough to make the ID. Score!

With our recent spate of cold weather even more birds of similar-but-not-quite-the-same feathers will be flocking together. Grackles are already in large groups targeting acorns and crabapples (thanks John Heneghan!) and it won’t be long before we see mixed flocks of red-winged blackbirds and brown-headed cowbirds. Look closely at these assemblages, which often number in the hundreds. What at first glance is a sea of sameness might yield some rusty or Brewer’s blackbirds, or maybe even a state-endangered yellow-headed blackbird.

Speaking of endangered, it’s also about time to put an eye to the sky for that ultimate bird Not Like the Others, the whooping crane.

A federally endangered species, whooping cranes occasionally join in with migrating sandhill cranes. Whoopers are big and white, so in theory they’re easy to pick out from their grayish traveling partners. The trick though is noticing that the cranes are overhead.

Like Canada geese, sandhill cranes move in a V formation. If they’re flying low enough, you’ll be able to see their long legs trailing behind their equally long neck and body. But they tend to fly much higher than geese, sometimes appearing as mere dots in the sky. Their rattling flight call will give them away, as long as you remember to listen for it.

As we move through October into November, increasingly large sandhill flocks will be heading south. When you hear their calls, look up, then look carefully at each individual. You might need binoculars if they’re really up there.

Do you see one, or maybe even two, not like the others? Yes? Yay! Major points for you! (And please be sure to let us know, so others can score too.) But even if not, give yourself high marks for trying. Because any day you can carve out some time to look for an endangered species is pretty special-a day that’s not like the others.