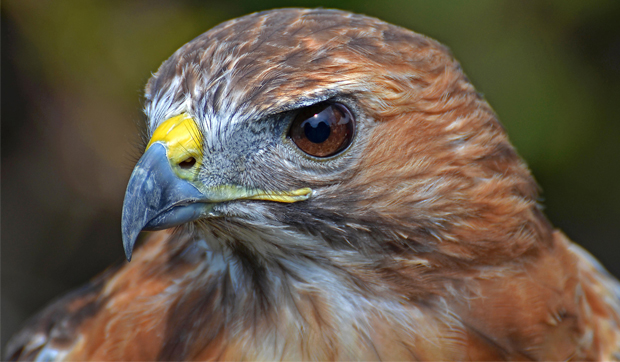 As diurnal hunters, red-tailed hawks possess a ridge above each eye. This feature helps shade the eyes from direct sun, and contributes to the birds’ ‘cool’ look. (Photo courtesy of AcrylicArtist at morguefile.com)

Remember The Far Side, those classic bits of natural history humor by cartoonist Gary Larson?

One in particular showed three hawks in a tree. All had sunglasses on; one even was wearing headphones and clutching a Walkman in his talons. Below, the caption read, “Birds of prey know they’re cool.”

Not only is this cartoon funny, in a very Gary Larson sort of way, but it’s also true, in a very human nature sort of way. Who hasn’t thought something similar when they’ve seen a raptor perched, all keen-eyed and sleek, on a tree branch or utility pole?

I for one think of this statement almost every time I see a red-tailed hawk. And, lately, that’s been just about every day. One of our most successful raptor species, redtails can be found soaring above the prairies and savannas of our local natural areas, perching on light poles along Randall Road, and zipping between fenceposts and swingsets in our suburban backyards.

Which is exactly where I spotted one the other day. Well, to be more correct, I heard one being spotted. I was at home doing some dishes; Tommy, my blue and gold macaw, was resting on his stand nearby. We were, I thought, enjoying a peaceful morning. But then, all of a sudden, Tom unleashed a series of squawks–ear-splitting  shrieks, actually–in a valiant effort to let his flock – me – know that we were about to die.

I looked out the window by his perch just in time to see a juvenile redtail swoop past the deck and land in the neighbor’s yard. Even though it had just missed grabbing a gray squirrel, this bird of prey still looked cool.

Meanwhile, Tom–who’s normally pretty cool in his own right–was anything but. In the wild, macaws are preyed upon by raptors like harpy eagles. Even though Tom was hand-raised by a nice lady in Mundelein, his instincts held true. Wild-eyed and panting, he really thought his number was up. I ended up moving his perch away from the window until the redtail, and all its coolness, moved on.

Back at the kitchen sink, I started thinking back to other times I’ve seen groovy redtail behaviors. In one case, a large female made a grab at a squirrel on the side of an oak tree. The angle was tough, however, and she missed. She didn’t lose her cool though. She sat on a branch on one side of the tree, while the squirrel clung, immobile, to the trunk about six feet away.

Five minutes or so later, I saw her cock her head to one side, looking down. After another minute she dropped to the ground, and gulped what appeared to be a mouse. A few minutes later, she dropped down and gulped again. And again.

All that time the squirrel stayed frozen on the tree, while the redtail ate her fill of rodents – maybe not the type she’d originally intended, but a meal just the same. When she was full, she flew off, leaving a very relieved squirrel to go about its day. And leaving me to ponder just how many rodents lived in the leaf litter of that particular woods.

Of course, even bird-of-prey coolness has its limits. Have you ever seen a juvenile redtail, just short of independence, demanding food from a parent who so wants to have an empty nest? These bouts of whining can look for all the world like a temper tantrum, and are every bit as unappealing in young raptors as they are in young humans. Not cool at all.

As apex predators, redtails sit at the top of the food chain – a position that likely accounts for a lot of their perceived coolness. Still, there’s one bird in our area that can make even a redtail shake.

I remember watching an adult redtail sunning itself on a bare, exposed tree branch in an open woodland along the Fox River. “Gosh,” I thought, as the bird confidently preened a few feathers, “that bird sure looks cool.”

But, suddenly, it cringed. Looking skyward, the hawk flinched again, then flew off to the safety of the nearby woods. I looked up too, curious at what might have made this seemngly unflappable redtail flee in fear.

I’m not sure where the redtail ended up after this encounter, but the eagle soared past again only a few minutes later. Its white head and tail shone, in stark contrast to its dark body, and its six-foot wingspan looked oh so impressive.

As I watched it sail past a third time, I could tell, without a doubt: Birds of prey know they’re cool.