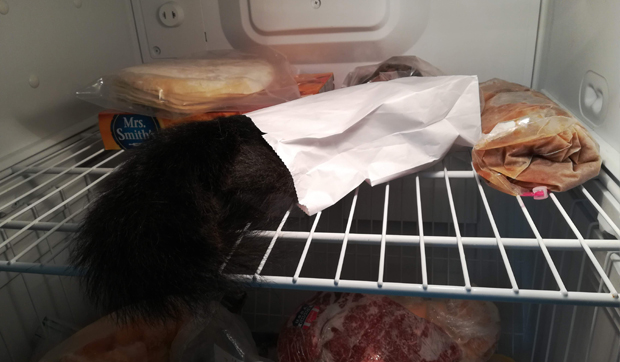 Photo Caption: RK III does some freezer time in advance of his trip to a taxidermist.

Last week we embarked on a story of Kane County squirrels-specifically black squirrels, which are a dark form of our common gray squirrel, Sciurus carolinensis-and even more precisely, two taxidermy mounts of black squirrels held in the collections at Hickory Knolls.

While one mount, dubbed RK I, survives nicely to this day, the other-RK II-sustained serious damage when I neglectfully left him on the roof of my car and drove away…an ugly twist on an otherwise beautiful day in October. When we last left off, I was pondering the extent of his disfigurement: the broken limb, the missing eyes, the stuffing that flapped in the breeze.

I briefly toyed with the idea of pasting RK II back together, in the same way Ralphie Parker’s dad in the movie A Christmas Story tried to repair his cherished leg lamp. (“With as much dignity as he could muster, the Old Man gathered up the sad remains of his shattered Major Award. Later that night, alone in the backyard, he buried it next to the garage…”)

Just as his attempt ended in defeat I knew mine would too.

What I wasn’t quite sure about was what to do next. I knew I had to notify the donor who had given us RK II, but as for the fate of the actual remains…?

That’s when I remembered the terms of our IL Department of Natural Resources Scientific Permit. The report file each year asks us to describe the disposition (as in fate, not temperament) of each fauna species we add to our collection of education artifacts. Usually I write that the animal was “put on display,” or “stored in freezer.” But for RK II I would have to choose “destroyed,” option two in the report’s multiple choice list.

Unless I buried it out back, next to the garage.

I was mulling those options as I spoke with the donor about my blunder. To my surprise and tremendous relief, he found the whole situation pretty funny, in a dark sort of way. He even pointed out that the squirrel was undoubtedly the only one in our collection to perish twice. Best of all, he made the offer that if we were to ever find another deceased black squirrel, he would get us another mount.

It was a gracious gesture, for sure, but all I could think about was the slim chance of ever coming across a third melanistic squirrel unlucky enough to get hit by a car in the vicinity of the nature center. Nevertheless, I vowed to keep my eyes open.

Flash forward to about two and a half weeks ago. I was driving down Peck Road, headed south, playing a round of Roadkill Bingo. (Rules in a nutshell: Try to be the first person in the car to find five different species dead on the road. Insects on windshields don’t count unless you can identify them, and all IDs are on the honor system unless time permits stopping to confirm.) I was feeling pretty confident I’d win-especially since I was by myself-and had already spotted a gray squirrel and an opossum when I saw a dark form up ahead.

“Skunk,” I thought as I approached at 45 mph. But as I zipped past I looked for the white stripe, and found none. “Hey, wait a minute,” I thought “That’s not a skunk!” Could it be…?

With a glee not unlike that of Mr. Parker as he unpacked his Major Award, I turned the car around and headed back. Heart pounding, I pulled over, put on the hazards and picked up-no lie-the biggest most beautiful melanistic gray squirrel to ever get hit by a car on Peck Road on a Sunday in November.

I felt bad for the big fella, for sure. But I also felt confident that he didn’t suffer. And since the external damage was minimal, I felt like I’d just won the roadkill lottery.

(Time for a quick tangent: As forlorn and unusable as roadkill might seem, if it is a native wildlife species it belongs to the state. IDNR conservation laws prohibit the collection of native wildlife, or parts thereof, unless you have the proper permit. If I didn’t have our IDNR permit with me when I found RK III, he would have had to stay there on Peck Road until he was either a) squished into oblivion; b) picked up by another roving naturalist; or c) grabbed by some other type of forager, like a red-tailed hawk or coyote. That salvage permit is like my old American Express card. I never leave home without it.)

Later that day I entered “Sciurus carolinensis, black and really cool” in the species column of that permit report we’re required to file. Color information isn’t required, but I thought that awesome extra detail might brighten the day of someone down in Springfield.

As for disposition, I wrote “Stored in freezer, to be placed in exhibit.” Because some day, hopefully sooner rather than later, Hickory Knolls will once again have a melanistic gray squirrel on display.