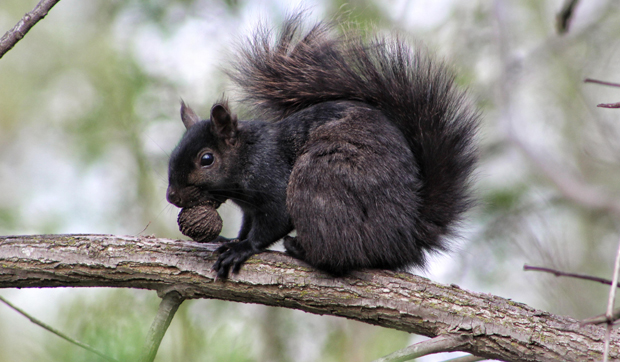 Photo Caption: Statistically, black or melanistic squirrels occur at a rate of about one in 10,000. But in areas where the melanism gene is prevalent, it can seem like a lot more. (Photo courtesy of davidpwhelan at morguefile.com)

They say that lightning never strikes the same place twice. But I wonder, is the same true of cars? And what about squirrels?

These questions have been rolling around in my head for several weeks now, and actually have their beginnings in a gift we received several months ago: a taxidermy mount of a beautiful black squirrel.

Black squirrels themselves are a little unusual, occurring in our area when a gray squirrel (Sciurus carolinensis) gives birth to a little nugget with more melanin, or dark pigment. The oft-quoted statistic is that one in 10,000 squirrels is melanistic. But in areas where the melanism gene is prevalent, it can seem like a lot more. (Fun fact: The other tree squirrel common in our area is the fox squirrel, Sciurus niger. Niger is Latin for black. Back in the 1700s, a black fox squirrel from South Carolina was submitted to the father of modern taxonomy, Carl Linnaeus, to receive its official scientific binomial. Based on the dark color he dubbed the species niger. But the fox squirrels in our area are orangish to reddish brown, and to date have never produced any dark offspring.)

Then, earlier this year, a frequent visitor offered us a second black squirrel mount. This individual, which I’ll refer to as RK II, was a generous gift we couldn’t refuse. (Another fun fact: It’s thought that excessive melanin may have helped tree squirrels survive during the last Ice Age, as their dark fur could help them absorb more heat from the sun. Hickory Knolls has an Ice Age exhibit featuring a musk ox, and a black squirrel seemed like an ideal addition to the display.)

RK II was outfitted with a base made from a small log, but before it could make its way into our exhibitry, it was appropriated into the collection of visual aids we use when conducting nature programs off site. In fact, it was absolutely perfect for October senior outreach presentations, which were titled Nuts About Squirrels.

And so it was that I packed up RK I and II along with some assorted nuts (the tree kind) and headed off to Town Center at the Holmstad in Batavia. The program went well, as best I can recall, and afterward I repacked everything for the trip back to Hickory Knolls. Except there was one problem. I couldn’t get all the items to fit back into the bin.

“No problem,” I thought at the time. “I’ll just carry RK II separately.” The arrangement was a little awkward but schlepping is something I’ve actually gotten pretty good at, and in only a few short minutes I was standing outside my vehicle.

That’s when RK II’s fate began to change, and not for the better. Needing a free hand to unlock and open the car’s back hatch, I-in a move I will always regret-placed RK II on the roof of the vehicle. I loaded the bin with the other presentation items, slammed the door, and merrily drove away.

(Fun fact No. 3: Years ago, like back in my 20s, I learned, through a series of misadventures, to never, EVER, put anything on the roof of my car. But for whatever reason, that day I had, as Pink Floyd would say, A Momentary Lapse of Reason.)

Driving along Peck Road, then Kaneville, then Fabyan, I scanned the roadsides, hoping against hope I’d spot the little guy intact and unharmed. When I didn’t find him along the way, I sent up a prayer that maybe, just maybe, he fell off in the Holmstad parking lot and that all I’d lose that day was some time and dignity. But, no.

I’ll never forget the sight that greeted me as I turned south off of Fabyan Parkway onto Route 31. There, lying against the curb on the east side of the street was RK II, the stuffing literally knocked out of him.

I parked at Holmstad and quickly scampered–squirrel like, but safer–across the four traffic lanes to retrieve what was left of our prize. Poor RK II. Cotton bulged from the space that had been his mouth, one rear leg hung limply and his little glass eyes, once beady yet cute, were nowhere to be found.

There’s lots more to tell in this Saga of the Squirrels, but we’re out of space and you’re probably out of time. Be sure to tune in next week when we’ll play a round of Roadkill Bingo; learn about the legalities of collecting wildlife remains; and apply context to the phrase, “Hey, wait a minute. That’s not a skunk!”