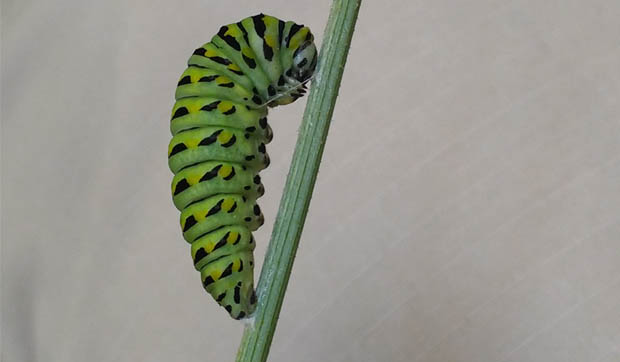 During the time it took to write this week’s Good Natured column, this black swallowtail caterpillar began pupating. It formed a silk button and “saddle”—a silken thread attaching it to a stem. Just after this picture was taken, it molted into chrysalis, where it will remain until its transformation to butterfly is complete.

All the hullabaloo about monarch butterflies and their potential endangerment has led me to wonder, What’s up with black swallowtails?

I started looking for them a couple weeks ago when I realized I hadn’t seen any yet this year. Then, as if by magic, an adult female appeared, fluttering her way toward the swath of Queen Anne’s lace I’d been inspecting. Aha! When the butterflies come, can eggs be far behind?

As it turns out I didn’t have to wait long to find out. Later that morning I heard that Ryan Solomon, one of our park district restoration ecologists, had found a black swallowtail caterpillar-on Queen Anne’s lace about 75 yards from the hip-high patch I’d waded through earlier.

Being just as curious about critters as I am, Ryan had carefully extracted his new little buddy from the pile of plants destined for the compost heap. He kindly offered to introduce us to his latest find.

Minutes later he was in the nature center office, fruit jar in hand. Inside, contentedly munching on more Queen Anne’s lace, was a good-sized Papilio polyxenes caterpillar.

Although they start out dark and knobby, with orange or red spots, once they’ve molted a few times black swallowtail caterpillars turn green, black and yellow and can superficially appear similar to the now-famous monarch cats. But closer inspection shows that the swallowtail’s pattern consists of dots and wavy lines, and their body posture appears hunched. Plus, they’re found only on plants in the parsley family.

Monarch caterpillars, by comparison, live on milkweed and display alternating bands of yellow, black and creamy white. In addition their head and hind ends each are bedecked with a pair of black tentacles or filaments that function as sensory organs and give the cats a cool “Which end is which?” sort of look.

But you know what’s even cooler than tentacles? Osmeterium! And every swallowtail larva has one.

Consider, if you will, what life is like for a fleshy, slow-moving caterpillar. When confronted by a threat, it can’t fly away-not at this life stage. It can’t lash out with claws or teeth. Shoot, with nosy naturalists prowling around, it can’t even rely on its camouflage colors to keep itself safe.

Enter the osmeterium.  Just behind the head, hidden inside a fleshy lump, this glandular sac gives swallowtail caterpillars a powerful form of defense. When the little cat is disturbed, the small, V-shaped structure rises up from just behind the head, in much the same way Uncle Martin’s antennae rose up out of his head on the old sitcom “My Favorite Martian.” It stays out momentarily, then gradually slips back inside where it will stay until the next threat appears.

The black swallowtail’s osmeterium is v-shaped and bright orange-just the thing to scare away possible predators. But the defense doesn’t stop there. Thanks to its diet of plants in the parsley family (think dill, carrot, parsnip, cilantro, fennel and, yes, Queen Anne’s lace) the caterpillar’s shocking display is accompanied by a foul odor that reportedly smells like stinky cheese.

A beautiful caterpillar and the promise of a good stink was almost too much good fortune for this girl to comprehend. But, try as I might, I couldn’t get Ryan’s cat to pony up. I’d squeeze, ever so gently;  the osmeterium would rise, ever so silently; I’d sniff, ever so…well, you get the picture. But, nope. Nothing. Not even a hint of cheese of any kind.

If you have a garden and grow any of those plants the black swallowtail caterpillar considers food, you may already be acquainted with this species. And you may not be too fond of it. Its prodigious appetite means it can defoliate a plant in only a matter of days. But as we mentioned, it does the same to Queen Anne’s lace, an introduced plant that can run rampant in natural areas if left unchecked.

Anything that eats Queen Anne’s lace is a friend of Ryan’s, and of mine. Keep an eye out for these engaging caterpillars over these next few weeks. Keep a nose out, too, while you’re at it. And if you find the caterpillar really does smell like stinky cheese, let me know, will you? Thanks, friend!