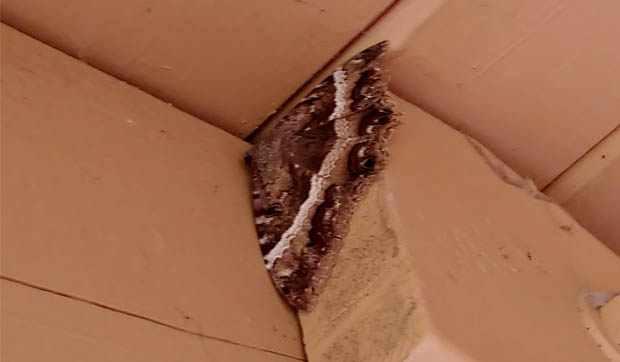 Photo Caption: The black witch moth is native to Central and South America but occasionally journeys northward. This individual, a female, was spotted a month ago at LeRoy Oakes Forest Preserve in St. Charles.

“The wind began to switch – the house to pitch
And suddenly the hinges started to unhitch.
Just then the Witch – to satisfy an itch –
Went flying on her broomstick, thumbing for a hitch.”

Wizard of Oz aficionados will recognize this verse as part of the Munchkins’ welcome to Dorothy after she landed, quite abruptly, in Munchkinland. But lepidopterists-people who study butterflies and moths-might be inclined to think of something else: the black witch moth, Ascalapha odorata.

This South American species, a regular migrant to the southern United States, was seen by the hundreds by vigilant birders in Port O’Connor, TX, in the midst of the eye of hurricane Claudette in July 2003. It’s notable that the winds in the eye of a hurricane are very still, only a mile or two per hour. The theory is that the moths were swept up into the storm’s rotation along the Yucatan Peninsula, then rode within the storm’s eye until it made landfall in the small coastal town in Texas. (The full story can be accessed here.)

Though we don’t have hurricanes in IL, and our tornados have yet to produce any witches, thumbing for a hitch or not, the black witch is an occasional visitor to our area. Rather than having houses land on it, it lands on houses, as well as other structures–usually in mid to late summer.

Imagine our surprise when, three weeks ago, one popped up at LeRoy Oakes Forest Preserve in St. Charles.

We were just packing up after another successful Creek Day when nature camp instructor Melinda Bossenga pointed out the large-6 in.wingspan-moth tucked up in the rafters of the picnic pavilion. She had first noticed it at 8:30am and, four hours and 50 squealing campers later, it hadn’t moved-most likely due to its nocturnal nature.

We didn’t immediately recognize the moth as a black witch. They are relatively rare in our area, especially so early in the season. In fact the only other time I’d encountered one was years ago when I worked at Red Oak Nature Center. I was preparing to do an evening program on bats, and someone noticed a large dark creature on, again, the rafters of the picnic shelter. The man wondered if it was a bat-the wingspan was nearly as long as his hand-but, no, it was a male black witch.

The individual we found at LeRoy Oakes was a female and, in contrast to the male, displayed quite a bit of pattern on her wings. As she looked unlike anything we’d ever seen before, I tapped into that fabulous resource known as BugGuide.net and soon had an answer to our ID question.

That foray onto the internet ended up yielding all sorts of fascinating natural and cultural history on A. odoratus-everything, it seems, except for the reason why this large and magnificent moth carries a species name indicating that it has an odor. (Note to self: Next time be sure to not just look, but also sniff.)

At any rate, the black witch moth’s primary range is in Mexico and South America, although they commonly migrate north and can often be found along the Gulf Coast. Some ambitious individuals have made it as far as Canada, but the species has never established itself in northern spaces due to the cold weather in winter.

Finding the one we did, in mid-June-almost a month before they typically show up via migration-makes me wonder where she started from. Her somewhat tattered wings indicate she endured some hardship, perhaps high winds or a brush with a predator. Regardless, the fact that she was here, a month ahead of schedule, is absolutely fascinating.

Equally intriguing is the black witch’s cultural history. Due to their large size, the males’ dark coloration, and their habit of flying at night, black witches have been unfairly saddled with the reputation of bringing evil and sadness. In Mexico the species is known as the mariposa de la muerte, or butterfly of death; in the Caribbean Islands where French is spoken, the moth is called sorciere noire, or dark sorcerer. Duppy bat, or lost soul, is the name given in Jamaica.

A legend says that if someone is visited by a black witch, he or she will soon die. Other versions say that the moth bestows viewers with a curse, and if one flies over your head your hair will fall out.

Breaking with these widespread myths, people of Cat Island in the Bahamas have a different take on the black witch. There, the belief is that the moth landing on you portends the coming of great wealth. And in Hawaii, a black witch is interpreted as the embodiment of a loved one who has recently passed.

Death wishes, curses and prosperity aside, the black witch is rare in our area, and sighting one is a treat. Think of Dorothy Gale, the protagonist in the Wizard of Oz. Black witch moths are the ruby slippers of Kane County lepidopterans-enchanting and almost magical. If you find one, you are lucky indeed.