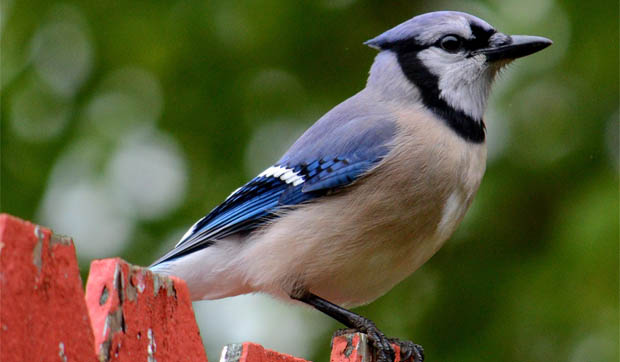 Think you just heard a red-tailed hawk? Look again! It might have been a blue jay displaying some of its amazing vocal skills. (Photo credit: joemyers67 at MorgueFile.com)

There’s no mistaking the distinctive call of the blue jay. Or is there?

Most folks can easily associate this common bird with its characteristic “Jeer!” It’s a sound blue jays uses early and often to stay in touch with one another. The call helps mates keep track of each other, and also serves to assemble the troops, so to speak, in response to a threat. When blue jays hear the jeer, they come flying. (Fun stuff: When you hear a bunch of jays raising a ruckus, see if you can track them down. Chances are good you’ll find a nice bird of prey, like a hawk or owl, trying their best to avoid all the attention.)

But blue jays have a wonderful array of other vocalizations, none of which sound at all like the raucous jeer.

I was reminded of how talented this bird is just the other day. I was working in the yard, sawing branches off a weedy mulberry tree I’d let get way out of control. I’d put the saw down for a moment and was looking for where I’d left the loppers when I heard it-the high-pitched “Keeeeer!” of a red-tailed hawk. Or at least what I thought was a hawk.

I looked up, thinking I’d see an iconic raptor soaring over the neighborhood. But nope, this sound seemed to be coming from a catalpa tree. And sure enough, it was. A moment or two later, the jay showed itself briefly, as if to take a bow after its superb hawk performance, and then flew off.

Ornithologists have a few theories of why blue jays mimic hawks, a group of birds the jays consider mortal enemies. One premise is that the hawk sound is code for “Jinkies! Here comes a hawk!” But if that were the case, it would follow that the birds would segue into their jeering and mobbing behavior, and that’s not usually the case.

A second theory is that the sound will scare other birds away from an area where something of value, like a food source, is located. But since the other birds quickly figure out they’ve been duped, and return, this theory has some holes too. A similar thought suggests the sound will scare predators away from a nest. But blue jays make the hawk sound year round, not just during breeding season.

A third thought is that jays simply find the sound easy to make. Like that favorite song to sing in the shower, it’s comforting and familiar, but brings about advantageous results like companionship and reduced competition. It could be that the hawk call is blue jay’s Do-Re-Mi, with benefits.

I was mulling over these various theories as I worked, lopping branches into smaller hunks that would be easier to haul to the curb, when I heard another well-defined sound: that of a rusty pump. Or was it a squeaky gate?

Turns out it was neither, just another blue jay (or maybe the same one) exhibiting more of its vocal repertoire.  “Squee-op! Squee-op!” When the birds make this sound, they usually accompany it with some bobbing or pumping motions of their own. The call is thought to signal low-level threats-like maybe mulberry branches hitting the ground?

I toted some of the brush around to the front of the house and when I came back the jay was gone. For the next half hour or so I worked in relative silence, save for the many cicadas that had warmed up and begun their recitals. I was beginning to think my blue buddy had flown the coop when, all of a sudden, the heavy air erupted with “Jeer! Jeer! Jeer!”

The jay was back, with reinforcements, and something set them off. A hawk? An owl? A cat? I was beginning to think I was missing out on something really neat when the group of four flew off to the west and got quiet again. I think maybe “Jeer! Jeer!” might also mean “Here! Here!” and serves to get the gang together for whatever adventure might lie ahead.

Regardless of the sounds they’re making, I’m just glad to hear the jays are back. Between West Nile virus and years where oak trees’ acorn production was low (yes blue jays eat and cache lots of acorns-probably even more than squirrels) we had quite a stretch where the birds were hard to find.

But today the jays are back, and to find them all you have to do is listen.