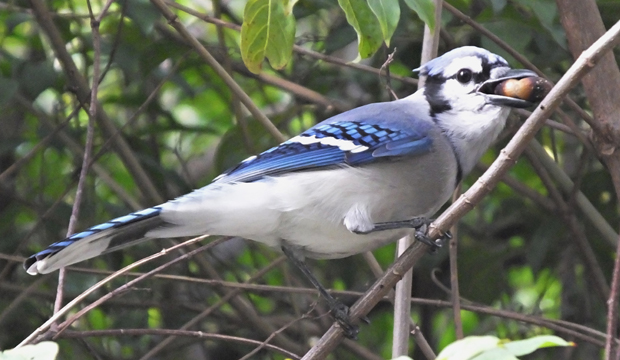 Thanks to an anatomical feature called a gular pouch, blue jays can stock up when food supplies are plentiful.

When you think of nuts – the kind that grow on trees – it’s hard not to think of squirrels.

They are, after all, the most highly touted nut-gatherers in these parts, collecting the trees’ bounty almost as quickly as it falls. In fact, squirrels will even chew off acorn-laden branches to make the harvest easier.

These tendencies are so well known, they’ve been spun off into a common verb. Have you ever “squirreled away” a little something for a rainy day?

But working just as diligently as squirrels, particularly around oaks, is another animal that’s just as nuts about nuts: the blue jay, Cyanocitta cristata.

If you have a birdfeeder in your yard, you might already have witnessed these birds’ amazing hoarding skills. Digging their bills into the seeds, then tipping their heads back, blue jays at a full feeder look to be stuffing themselves silly.

It’s true, squirrels visit feeders, too, and help themselves to generous quantities of sunflower seeds and corn. But squirrels are like shoppers in the express lane at Jewel – they get only a few items at a time. Blue jays, in contrast, are like customers at Costco. They stock up, packing in the bird equivalent of a cartload of groceries; they then stash, or cache, them for use at a later date.

Blue jays are one of several species of birds gifted with a little anatomical accessory called a gular pouch. This sac, which opens underneath the bird’s tongue, reaches down into the throat and upper esophagus. Probably the best-known example of this nifty feature is the bird taxonomic family Pelecanidae-yes, the pelicans-which use their large sacs to scoop water and fish.

Though small by comparison, the blue jay’s gular pouch can hold one large or three small acorns. If we use that latter figure, then add in another acorn in the mouth and one at the tip of the bill, a blue jay can haul away five acorns–a feat that quintuples the efforts of the average squirrel.

It’s not hard to understand, then, how blue jays can be significant dispersers of seeds like acorns. A squirrel may be able to haul one acorn 50 yards, but a blue jay can fly a whole pouchful a mile or more away from the mother tree – which is great news for the genetic diversity of our oak woodlands.

Contrary to popular belief, and thanks to blue jays, the acorn can fall far from the tree … and help perpetuate the species.

While distance is important, so too is quantity. Scientists studying blue jay caching behavior observed that 50 jays transported somewhere in the neighborhood of 150,000 acorns in just 28 days. That breaks down to some 3,000 acorns per bird, with an average daily rate of 107 acorns per bird, per day. That’s a lot of food, even by Costco standards.

Although the purpose of this behavior, as far as the jay is concerned, is to ensure an adequate food supply for the winter, they usually don’t retrieve every item they stash. Those nuts that are left uneaten often germinate and grow, creating new trees in new areas. So proficient are their forestry skills, blue jays are credited with helping regenerate oaks and other nut trees after the last glaciers retreated.

Next time you see a blue jay, take a closer look – especially at its throat. Does it appear distended? That’s the gular pouch. Once you’ve seen one, you’ll find they’re easy to pick out.

You can even play a fun game of Guess What’s in the Pouch? In neighborhoods without a lot of oaks or other nut-bearing trees, the contents will likely include things like sunflower seeds, corn or a blue jay favorite, peanuts. In the woods though you’ll need to first identify the dominant tree species before weighing in with your final answer. White oak? Red oak? Chinkapin?

This year especially, blue jays are going bonkers. We are in the midst of a mast year, which means trees have produced prodigious quantities of fruit. Acorns are everywhere!

Many will get taken away, and most of these will get eaten. But some will be forgotten. If conditions are right, they will germinate next spring and grow into oak seedlings. With more good fortune the seedlings will survive to become saplings, then mature, mighty oaks-all from acorns that were squirreled, er, blue-jayed, away.

Pam Otto is the outreach ambassador for the St. Charles Park District. She can be reached 630-513-4346 or potto@stcparks.org.