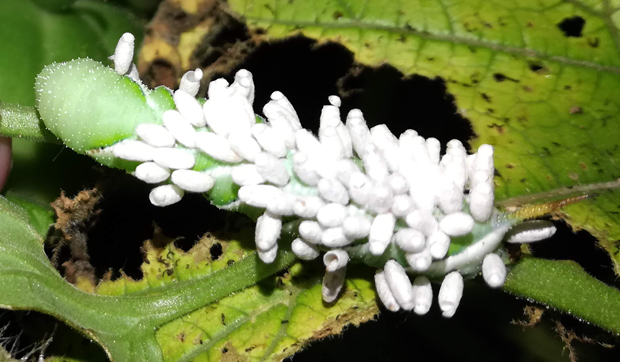 Photo Caption: Cocoons of the tiny parasitoid wasp Cotesia congregata line the back of a tobacco hornworm, Manduca sexta, as it clings to a tomato plant in St. Charles.

Judging by the yields in the community garden plots at James O. Breen Community Park in St. Charles, 2019 is a big year for local produce.  Even in my little home garden, which isn’t much more than a few determined plants scattered amid some daylilies that refuse to go away, is looking rather bountiful this season. But tomatoes and peppers aside, what I’m most proud of this season is my bumper crop of Braconidae, or braconid wasps.

I didn’t purposely produce these most beneficial insects but rather was lucky to have exactly the right pieces fall into place. My veggies of choice, tomatoes and peppers, all are members of the Solanaceae, or nightshade, family. This diverse group also includes eggplant, potatoes, tobacco and petunias-plants with certain botanic characteristics in common, as well as one other important trait: They are a favorite food plant for hornworms-the caterpillars of various species of hawkmoths, also known as sphinx moths.

In our area, the predominant species is Manduca sexta, the six-spotted hawkmoth or tobacco hornworm. Despite its common name, these caterpillars commonly are found on tomato plants. With nothing to do but cling to the stem and eat, a couple of hornworms can defoliate an entire tomato plant in a matter of days. If present in greater numbers, hornworms can cause an entire crop to go down in frass (another name for insect…well…poop).

So imagine my delight earlier this week when I spied, not only a tobacco hornworn on one of my tomato plants, but also a smattering of white. I looked closer and there they were: wonky rows of white cocoons, each about the size of a grain of rice, protruding from the caterpillar’s back and sides.

Softie that I am, I winced a bit at the thought of what was going on. The caterpillar, though still alive and relatively plump, was being eaten from the inside out by the larvae of Cotesia congregata, a tiny braconid wasp.

Measuring less than 1/4 in. in length, these guys are small, for sure, but pack a powerful, many pronged punch that is mechanical and biological as well as viral in nature. The caterpillars they target don’t stand a chance.

Female Cotesia are equipped with a needle-like appendage called an ovipositor which, as the name implies, is used to deposit eggs. When a suitable hornworm host is found, the female wasp pierces its exoskeleton with her egg-laying apparatus.

But what’s even cooler is, in addition to depositing several dozen eggs, she also inserts a type of polydnavirus (read poly-DNA-virus) into the luckless larva. This virus attacks the caterpillar’s immune system and renders it unable to encapsulate the wasp eggs; it also halts the caterpillar’s development, so it can’t pupate and transform into a moth. Amazingly, the virus also changes the caterpillar’s metabolism so that it can survive longer without food or water-thus ensuring a nurturing environment for all the young wasps to come.

Basically comatose but still alive, the caterpillar becomes a living, breathing brood chamber. Inside its body the wasp eggs hatch and the larvae begin consuming their macabre meals of caterpillar bodily fluids. As the caterpillar gamely clings to a plant stem, the baby wasps grow to their final instar, or stage of larval development. They then chew their way to the surface, spin their small, white cocoons and pupate. After a few more days, the adult wasps emerge and fly away while their host caterpillar, saggy and sunken, drops off the plant and decomposes.

With their wide range of unique qualities, both hornworms and braconid wasps are used extensively for classroom study as well as biomedical research. With so many people watching these charismatic creatures, it’s no wonder that they now have their own “Hornworm Meets Alien” YouTube video. Thanks to the folks at Purdue Extension Entomology in West Lafayette, IN, you can view the entire saga, in just over two minutes, at http://www.youtube.com/watch?v=nZZyJQNmOV8.

Or, if YouTube’s not your thing, but gardening is, look over your tomato plants (and peppers and eggplants) to see if you can spot any hornworms. If you do, try to resist the temptation to squish or drown them on the spot; instead, let them feast a few more days. You’ll sacrifice a few plant stems, but in return you may be rewarded with your own bumper crop of Braconidae.