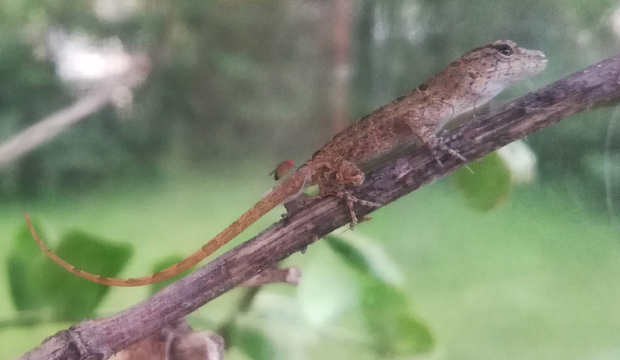 Photo Caption: Pam Otto says the surprise appearance of this little brown anole is the 12th such occurrence she’s heard about in the past 15 or so years. These small lizards frequently travel north in tropical plant shipments and, besides homes, also have been spotted in stores selling such plants.

You reach in your coat pocket and find a forgotten $5 bill. Yay!

You run into an old friend at the grocery store. Woo-hoo!

You’re sipping your morning coffee, and a lizard runs under the couch.

As incredible as it sounds, that’s exactly what happened to my friend Laura just the other day. And no, she doesn’t live down south, or out west, or any other place where lizards abound. In fact, she lives just a few blocks from me right here in good ol’ St. Charles, IL.

Our fair town is known for a lot of things, most notably our picturesque location along the scenic Fox River. But one thing we’ve never been associated with is lizards. And with good reason! Although Illinois has a few native lizard species, they are found primarily in the southern 1/3 of the state.

As Laura explained during a post-coffee phone call, the couch creature was so small, and moved so fast, she at first was unsure of what she’d seen. But after a bit of rummaging, plus a few quick moves by both her and the wee beast, she captured it in a Tupperware container.

It was, without a doubt, a lizard.

My first question for Laura was whether she had recently purchased any houseplants. Because, strange as it seems, plants that are grown in warmer climates, like Florida, then shipped north, often bring along unintended cargo in the form of young lizards, or the eggs from which they’ll spring.

It turns out, Laura’s daughter Kate had indeed brought home a couple of new plants the weekend before. I’m unsure of their species, but the lizard that hitched a ride is a brown anole. Anolis sagrei was introduced to south Florida from the Caribbean in the late 1880s. Finding the Sunshine State to its liking, little A. sagrei steadily advanced northward and today can be found in nearly every region in Florida, as well as assorted locales in Georgia, Louisiana and Texas.

Such expansion is quite an accomplishment for a reptile that, fully grown, measures just over 8 inches-with over half of that length being tail. But the brown anole has several factors working in its favor. Its generalist diet includes a wide variety of insects, spiders and other invertebrates-all of which are in abundant, year-round supply. It thrives in disturbed landscapes-another feature which Florida has in abundance.

Perhaps most important, this species gets moved around a lot by people. Some of this movement is intentional, as folks often keep brown anoles as pets. But much is accidental, with the lizards getting transported as stowaways in boats and firewood.

Thanks to a reproductive strategy that includes laying eggs one or two at a time, in soft, moist soil, brown anoles have found ideal habitat among the many greenhouses and outdoor growing plots that dot the Florida landscape.

Female brown anoles are capable of laying 15 to 18 eggs per breeding season. That number doesn’t seem like a lot, until you consider the advantage of this one-at-a-time approach. It’s almost as if the brown anole heard the adage, “Don’t put all your eggs in one basket,” and decided, then and there, “Alrighty, I won’t!” With her offspring so distributed, chances are very good that at least a few will survive.

Compare this strategy to that of other lizard species, many of which deposit all their eggs in a single clutch. One visit by a predator, one big rush of floodwater, and it’s bye-bye next generation.

Adding to the brown anole’s many range-expanding advantages is the fact that they’re just darn cute.

Related to the Carolina anole-the lizard that changes color from green to brown, and used to be labeled “Chameleon” in pet stores across the country-the brown anole has a blunter nose and, often, irregular patterns of spots, chevrons and light-colored lines.  An intense gaze and lively habits only add to its endearing qualities.

I know this because yes, I’ve fallen under the species’ spell. Laura’s lizard, now named Mac, has been living in an enclosure in my kitchen for a few weeks now. S/he is feasting on flightless fruit flies, purchased just for her/his delectation, lapping water misted daily, and growing, growing, growing.

If you or someone you know is considering adding some tropical plants to your indoor or patio decor, go for it. But as you’re admiring your purchase, perhaps while sipping coffee, don’t be alarmed if–Leapin’ Lizards!–you’re paid a visit by a brown anole, one of life’s little surprises.