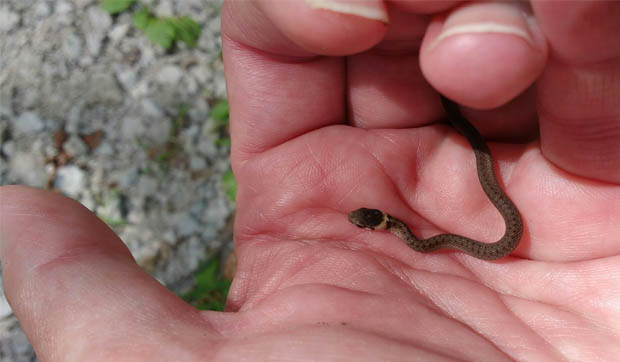 Midland brown snakes are quite common throughout the TriCities but rarely seen due to their small size and secretive nature.

Back in August, the staff here at Hickory Knolls was in full-on nature camp mode, hosting dozens of kids in a variety of outdoor-themed programs. I was lucky enough to lead my tenth year of Reptile and Amphibian camp, known in shorthand as Herp (for Herpetology) Camp.

It was a Wednesday-a very warm Wednesday-as we headed out with our merry band in search of the group of animals targeted for that day: snakes. (Other days had aimed for other critters also classified as herps-frogs, toads and salamanders. Funny thing. These amphibians are in no way related to reptiles. But they are creepy and crawly and, back in the day, they were lumped in with snakes and lizards due to their squiggly nature.)

At any rate, there we were, hiking along with eyes peeled for garter snakes, the most likely quarry for the habitat we were in. Which is kind of funny, because we were poking around in an old quarry.

The hot summer sun blazed down on us, and it wasn’t too long before one of the campers started to display some adverse reactions to the heat. Not a fan of hot temperatures myself, I offered to walk him back to the picnic pavilion where a nice, ice cold drinking fountain was located.

So off we went, the sweaty camper and I, through the cloud of mosquitoes and around the patches of poison ivy, making our way back to the pavilion. I was still in snake mode though, so our progress could be rated as somewhere between slow and downright pokey.

About halfway up the trail to the woods, I noticed an odd, wavy motion among the crushed gravel. The creature making it was small, tiny even. Or, to reference the above comparison, itsy bitsy. I was about to write it off as a worm, except for the fact that no self-respecting worm squiggles across dry, rough crushed gravel on a 90-degree day.

I told my friend the sweaty camper to hold up a moment. I reached down and picked up the teensy creature, and was delighted to see that it was in fact a snake. An Itsy Bitsy Storeria dekayi wrightorum, or midland brown snake.

Now, in the Illinois snake world, we have some pretty large contenders, like Pituophis catenifer sayi, the bullsnake, which regularly reaches a length of eight feet or more. And the black ratsnake, Pantherophis spiloides, that measures out around six feet. (For all you snake fans out there, you can see both of these magnificent species at Hickory Knolls.)

Anyway, Illinois is also home to some very small species , that top out at a length of less than two feet. We have the ringneck snake, Diadophis punctatua, which can grow to 15 inches; the red-bellied snake, Storeria occipitomaculata,  which tops out at 10 inches; and our featured species, the midland brown snake, which averages 13 inches in length.

The brown snake is actually quite abundant in our area, although it is rarely seen. Its habit is to hang out in leaf litter, which is brown, and in moist soil, which in our area is mostly brown too. So it’s of no surprise that the species is easily overlooked.

I found my first brown snake about 20 years ago when I was raking my fingers through leaf litter looking for butternuts. Imagine my surprise to find a small brown snake intertwined amid my fingers! The snake, I’m sure, was as surprised as I was.

Since then I’ve seen adult brown snakes basking on the paved Fox River Trail as well as on the bluffs along the Fox River in Batavia and North Aurora. But never until August did I see a teensy juvenile. At that time it was probably recently birthed, as brown snakes produce live young instead of eggs.

The diet for this secretive species is mainly earthworms and slugs-two other groups of animals that prefer moist habitats. The wee beastie we found was nearly as large as its prey!

As you go about your walks and hikes this fall, keep the midland brown snake in mind. You might not actually see one, but can trust that one or more Itsy Bitsy individual is likely nearby.