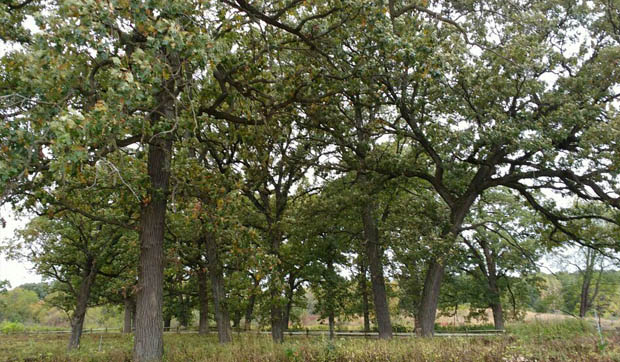 Bur oak trees are known for their large acorns as well as their thick and fire-resistant bark that helps protect them during prairie and savanna fires. The oaks pictured, from the savanna behind Hickory Knolls, are all over 100 years old and still going strong.

Maybe, as an alert observer of natural phenomena, you’ve noticed what’s up with bur oak trees this year. Or maybe you’ve been an unfortunate victim, twisting an ankle or suffering a knock on the head as the big trees drop their jumbo-sized, shaggy fruits. Either way, it’s hard to deny: 2017 is a big year for bur oak acorns.

Oaks in general are referred to as “mighty,” but I’d wager that bur oaks are among the mightiest. They grow tall and spread wide, and their bark is thick and corky-an asset that was particularly handy back when prairie fires were common.

Then there are the bur oak acorns. The largest of any native oak, these fruits can measure more than 1 1/2 in. in length and feature a cap that looks like something grandma might have knitted. It’s knobby and deep and encircled with a bushy, bristly fringe; I swear I wore something just like it back in the ’70s.

The bur oak acorn is so notable, in fact, that it accounts for the species’ common and scientific names. “Bur” refers to the acorn’s resemblance to the burs produced by the burdock plant-you know, the ones that stick on clothing and pet fur like glue this time of year. Another name for the bur oak, mossycup oak, also underscores the acorn’s shaggy appearance. Meanwhile, the species’s scientific name, Quercus macrocarpa, literally means “beautiful tree with really big fruit.”

This year, like the hickories we wrote about a few weeks ago, the really big fruit is present in really big quantities. We’re in the midst of a natural event scientists refer to as a “mast year,” a year in which  particular species of trees produce prodigious quantities of fruit. The occurrence is synchronous, meaning just about all trees of those species do it at the same time, but also irregular, happening at intervals that may range from as few as two to as many as 12 years. Oaks, hickories and walnuts are some of the main mast producing trees in our area.

While they all know what to call it, those same scientists aren’t all in agreement as to why it occurs. One leading theory proposes that masting is a reproductive strategy meant to help the tree gain an advantage over seed eaters like mammals and birds. If the trees can produce so much fruit that every animal that eats those seeds has more than enough, then certainly some seeds will survive to sprout and grow and pass along that all-important genetic material.

But just as the trees giveth, they sometimes taketh away. Low mast years are also part of the picture, and help keep seed predator populations in check. I remember year not too long ago where virtually all nut-producing trees in our area were at a low ebb; there was not a walnut or acorn to be found. Squirrels were scavenging wildflower seeds and leftover berries-and birdfeeders– instead of nuts in October. And come spring, there were noticeably fewer squirrels in the woods.

To further sort out the puzzle, scientists also are exploring whether mast years occur in response to environmental cues, like the abundant rain we had this year. Other theories focus on mast years being the result of some internal, biological mechanism. Research on the subject is ongoing and results are mixed.

We can be sure of this, though: 2017 is a big year for bur oak acorns. Enjoy the bounty, but watch your step!