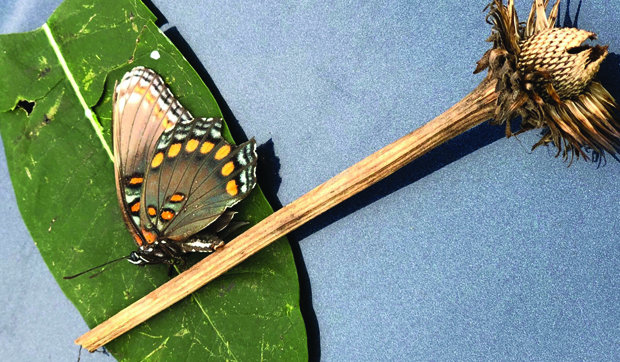 Photo Caption: This particular red-spotted purple butterfly, a victim of our recent cold temperatures, will flutter no more. But the species will live on, thanks to an innovative overwintering strategy.

You’ve gotta admit, monarchs are the current darlings of the butterfly world. Markings that are easy to recognize, combined with a 2014 petition for endanger species status and a famous 3,000-mile southerly migration, mean this insect is on everyone’s radar these days.

But you know what? While our area’s monarchs are well on their way to their wintering grounds in Mexico, our other local butterflies have commenced with cold-weather survival tactics that are every bit as remarkable as those of dear Danaus plexippus. They’re just not as well known.

We do, for example, have a few other speices that head south for winter. The painted lady, Vanessa cardui, and the American lady, Vanessa virginiensis as well as the related red admiral, Vanessa atalanta and common buckeye, Junonia coenia , all migrate. But because the distance isn’t as great, and their population numbers are stable, these medium-sized beauties seldom make headlines.

Even less noticeable are those butterfly species that overwinter right here in northern Illinois. Take, for instance, the mourning cloak, Nymphalis antiope and the two Polygonia species named for punctuations – the comma and the question mark. In a feat that is rather extraordinary in the insect world, these guys overwinter as adults, nestling into nooks in bark and woodpiles, and even gaps in wooden shingles and siding. What a thrill it is to see them fluttering by on a warm sunny day in late winter! Remember this, and look for them right about the time the sap begins to run…

But not every adult butterfly is lucky enough to make it through the winter. As a matter of fact, most don’t.  Check out the poor individual that’s featured in this week’s photo, which was submitted by Good Natured reader Patricia Fett.  She found the red-spotted purple, Limenitis arthemis Astyanax, which was lying on some milkweed, as she was cleaning up her garden.

“All summer long the kids have been collecting caterpillars and watching them transform but they’ve all been monarchs,” Patricia noted in her request for identification.

At first glance, this species’ approach to winter survival does not appear very successful. Alas, it’s true, this particular butterfly will not see the spring. But its progeny will.

Right now, red-spotted caterpillars are hunkered down inside of leaves they’ve rolled up and sealed with a bit of silk. What each of them creates is a cocoon of sorts, but not the kind that will produce an adult insect. Its official name is a hibernaculum, which is Latin and means “a tent for winter quarters.”

The leaves of choice are those of the caterpillar’s preferred food plants, which in our area include quite a variety: black cherry, cottonwood, basswood, birch, hawthorn, hornbeam, poplar, serviceberry and several species of apple, oak and willow.

It’s actually a great strategy, one that’s also practiced by several other species in our area, including the purple’s close cousin (and monarch mimic) the viceroy, Limenitis archippus, and fritillaries, checkerspots and crescents.

Then we have those butterfly species that opt to overwinter in the pupa stage. This group also includes several familiar names, including the swallowtails, sulphurs and whites, as well as certain skippers. Attached to twigs and plant stems, these chrysalises will ride out winter’s worst, then emerge in May-when spring is more or less likely here to stay.

And finally we have those butterflies that are really, really hard to find evidence of right now: those that overwinter as eggs. If you’ve ever tried to find a butterfly egg, you’ll know what I mean. They’re about the size of the tip of a pen, and frequently textured or patterned. In our area it’s the Satyrium hairstreaks that opt for this strategy, leaving their eggs on the twigs of food plants like oaks and hickories (banded hairstreak) and cherries and plums (coral hairstreak).

When you take the monarchs and those few other migrating species out of the equation, we’re left with a whole lot of butterflies that are spending the winter all around us. They’re in leaf litter, on and underneath bark and in all sorts of nooks and crannies.

Hmm. I don’t know about you, but this sounds like the perfect reason to put off those traditional fall cleanup chores like mowing, raking and leaf blowing. Look at it this way-you won’t disturb those vital overwintering sites, and once the snow falls no one will know the difference anyway.   Plus, the more habitat you preserve, the more future butterflies you’ll save. You can’t really ask for a better excuse than that.