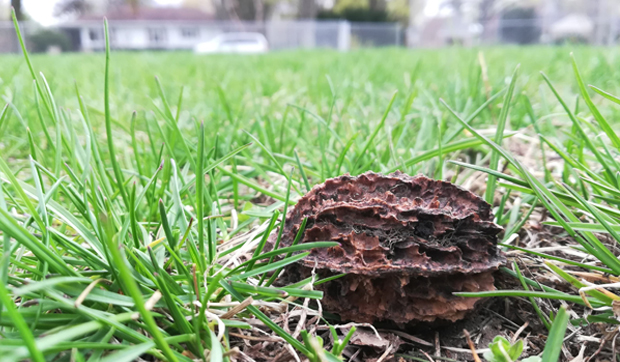 Butternut trees, also known as white walnuts, are increasingly rare throughout their range. Yet a few resilient individuals remain within the St. Charles urban forest.

After a prolonged absence-nearly eight years– Build Me Up Buttercup, that great song by The Foundations, once again is reverberating through my skull. Day and night I’m humming the catchy tune, whether I want to or not. All because I took a walk.

One fine day (an actual day, not the one in the song by the Chiffons), not too long ago, the sun was shining, the birds were singing; in a nutshell, conditions were perfect for walking to work.

Save for one stop to check out some ground bees and a quick glance at what turned out to be pigeons circling overhead (well and one very brief pause to identify and silently curse a Bradford pear tree) I made great time; even better, the day’s work proceeded efficiently and before I knew it, it was time to walk home.

That’s when  ‘Buttercup struck. Only, just like when it happened in 2013, it wasn’t a buttercup that prompted the song’s repetition. It was a butterNUT.

I was at Baker Field Park, one of St. Charles’ lovely neighborhood parks, when I noticed a female northern flicker poking at the ground in the old ballfield there. She was intent on her work near the pitcher’s mound, and I was intent on trying to figure out what she was up to. My hunch was she was dining on ants-a flicker favorite-but I wasn’t able to confirm because that’s when I saw it, sitting about where second base would be: a butternut nut.

Intact and only a little muddy, its oblong and deeply fissured form was unmistakable. But where, oh where, did it come from?

I scanned the trees surrounding the park-something I tend to do anyway, as a means of honing my tree ID skills-and saw only the familiar favorites…maples, sycamore, Kentucky coffee tree… Nothing looked even remotely butternutty.

As I left the park, nut in hand, I reflected back to 2013, the last time butternuts insinuated themselves into my life. At that time I was finding them in various places around the outside of my house and yard-stashed, or cached, no doubt, by an enterprising squirrel, or maybe a crow. I eventually narrowed down to a single yard where I thought the mother tree might be, but before I had a chance to verify the ID, the tree was cut down.

In support of that theory, the butternuts stopped appearing. In fact, I’d nearly forgotten that unsolved mystery, until last week’s encounter. As I pondered the source of this latest nut, the familiar refrain crept into my brain:

Why do you build me up
(Build me up)
Butternut, baby
Just to let me down
(Let me down)
And mess me around…?

The butternut, or Juglans cinerea, is a tree in the same genus as the black walnut, Juglans nigra. In fact, one of its other common names is white walnut, for the light color of its wood. The two trees do share several traits, but what’s interesting to me are their many differences.

For one, while black walnuts are ubiquitous, butternuts are rare. Susceptible to a canker disease caused by a fungus with a $10 name, Sirococcus clavigignenti-juglandacearum, the tree’s numbers have been reduced by as much as 80% in its home range (eastern United States and southeast Canada). Along with Dutch elm disease and American chestnut blight, butternut canker often is dubbed one of our country’s greatest tree tragedies.

Another major difference lies in the trees’ structural components. In natural areas, where fire is used as a management tool, black walnuts are relatively resistant to the effects of high heat; their thick bark and strong heartwood protect them from damage and resulting decay. Meanwhile, butternuts do not tolerate fire well and frequently succumb if burned.

Dendrologists, naturalists and others who enjoy identifying trees by using characteristics other than leaves will quickly recognize black walnuts as the trees with the “monkey face” leaf scar; the point where the leaf is attached to the branch does indeed bear a strong resemblance to Curious George. For butternuts, though, that monkey face is enhanced by a band of hairs above its top edge. Imagine Curious George with a uni-brow and you’ll get the picture.

Then we have the butternut’s namesake fruit. Like its cousin the black walnut, the butternut’s nut is protected by a thick green husk. But unlike J. nigra, which bears round, smooth-coated fruit about the size of a handball, the butternut’s fruit is oblong in shape, hairy and sticky. Its flavor reportedly is creamy and mild, similar to black walnut but without the astringency.

As I continued my walk home I rolled the nut in my hand, imagining its buttery deliciousness while redoubling my efforts to find its source. I peered past parkway trees into the yards of the homes surrounding Baker Field. More maples, a magnificent sycamore, a catalpa, redbuds in bloom…but alas, no butternut. I’m not giving up though. This latest discovery has renewed my faith that a mature tree is alive and well, somewhere on the near west side of St. Charles.

I’m going to keep walking, and searching, and hoping that at least one cinerea survives. Chances are good I’ll be humming along the way: Build me up Butternut, don’t break my heart.