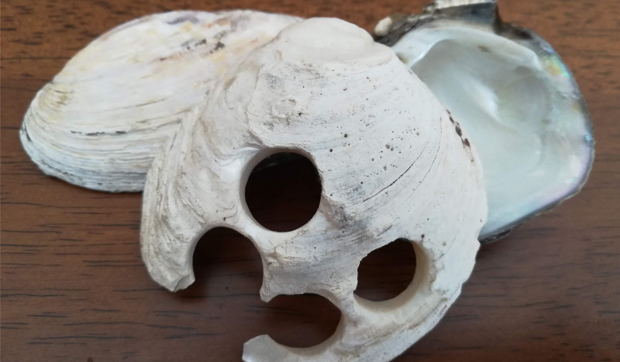 During the late 1800s and early 1900s, freshwater mussels were harvested from many local waterways to supply material for a booming button industry. But as mussel populations waned, factories were shuttered. Today these punched-out shells occasionally resurface as reminders of that historic era.

Well, I popped a button.

Right in the middle, where the thread crisscrosses and anchors the button to the cloth, the plastic failed and the small disk went flying. Now I could blame the repeated excesses of our recent holiday season, or the donut binge I went on last week. But instead I’ll blame the cheap resin from which that button was formed.

As I looked for the fastener-turned projectile, grumbling just a bit, I remembered how much my Grandma Erickson hated plastic buttons too. She well remembered the days BP-Before Plastic-and spoke fondly of how the mother-of-pearl buttons that proliferated back then could hold up to a hot iron without melting. In fact she so valued those buttons (and so abhorred anything resembling wastefulness) that she saved every one she could, storing them in an old cookie tin for occasions just like the one I was facing.

I remember playing with those buttons as a kid, not fully realizing that most of them were as old, or even older, than Grandma herself. What I also didn’t realize then, but wonder about now, is whether any of them could have originated nearby, in our Fox and Illinois Rivers. For “mother of pearl” is another way of saying nacre, the iridescent lining inside a mussel shell. And back in Grandma’s day, most of the buttons on the market were made from the shells of Midwestern freshwater mussels.

At that time-we’re talking more than 100 years ago–mussels were harvested by the bucket load, and boatload. Entrepreneurs called clammers, and sometimes industrious kids (you could earn about a penny a pound), collected the bottom-dwelling, filter-feeding creatures by hand – and by hook.

Clammers in it for the big money (button companies generally bought by the ton) would attach four-pronged implements called crowfoot hooks to a bar, then drag them from a boat along a river bottom. Mussels embedded in sediment, their shells partially opened for feeding, would instinctively clamp shut on the hooks as they bounced by.

Back on the riverbank, the mussels were removed from the hooks and tossed into a steamer vat, then cooled and sorted. The “meat” (an often-gritty mass sometimes used as fish bait or pig feed) was removed and checked for pearls, and the cleaned-out shells were then shipped to a button factory for processing. In our area, the largest such facility probably was the Rehbehn Brothers Button Factory in Yorkville. It was located on the south side of the Fox River near what is now the Route 47 bridge.

If you happen to find yourself by the river in Yorkville, downstream of the bridge, take a look along the shore and in the water. Even today, 100 years after the pearl button industry boom, it’s still possible to find freshwater mussel shells with uniform circles punched out.

I’ve got a few of these punched-out shells, which we use at the park district in our aquatic ecology and Fox River programs. But, even when not teaching, I’m still apt to have a shell or two handy, just because I think they’re really cool. For me the shells, for one, symbolize the struggle of the button cutters – who, on a good day, might be able to cut 100 pounds of shells and produce 3,600 button blanks. It was messy work, and kinda dangerous too. They were paid by the piece, and were penalized for excessive waste – that is, not getting enough blanks from a shell. Six-day work weeks consisting of 10-hour days might fetch a week’s paycheck of $20.

Our button shells to me also represent the struggle of the mussels themselves. As if it wasn’t enough that their lot in life is to be bottom-dwelling filter feeders, these critters also bore the added burden of overharvesting. Only the very smallest bivalves escaped capture; most of the rest were turned into buttons.

With no limits on mussel takes, it isn’t surprising that the Fox River clamming industry went bust just a few short years after it boomed. Although the thinking at the time was that the river was simply becoming too polluted (another sad but true circumstance), the fact remains that too many mussels were taken. Only recently have their populations grown, although estimates are that they will never attain the numbers they once had.

So, did I ever get a new button sewn on?

Well, no, not yet. I don’t have Grandma’s button tin. But I did find some more button shells in a bowl on my dresser. A few ancient blanks too. Oh, and in a dresser drawer, some turtlenecks I forgot I bought last winter. They’re warm and soft and, best of all, button free.