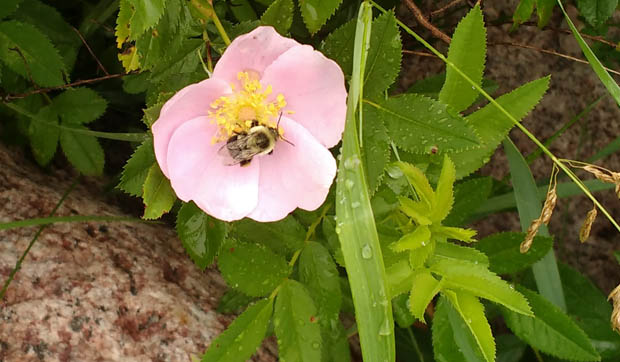 Photo Caption: This bee’s wings are folded across its back, a posture that indicates buzz pollination is taking place. The sound produced during this process is another giveaway. The frequency closely approximates that of middle C, or C-sharp/D-flat, although the exact pitch varies with species.

When was the last time you had a really good buzz?

I’ll tell you one thing-it’s probably more recent than you think. In fact, if you’re a gardener, you’re probably getting buzzed right now.

Many species of native bees offer a special service-free of charge!-called buzz pollination. It’s a process that’s fascinating to watch, and astounding in its impact. Because some plant species can’t survive without it.

So what the heck are we talking about here? Don’t all bees buzz?

It’s true, as bees fly around their wingbeats create a sound we interpret as buzzing. The same can be said for wasps, certain beetles and flies-including those mosquitoes we have so many of these days.

But buzzing to collect pollen is a completely different phenomenon. To understand what’s at stake, let’s first take a look at things from the plant’s perspective. Being stationary, these organisms are in a bit of a pickle. They must somehow disperse their pollen-those fine grains produced by the male parts of a flower-to the female parts of other plants of the same species, all while remaining firmly rooted.

Some plants like ragweed and various trees and grasses let winds do the work for them. You’ll note that these species produce flowers that are inconspicuous, since the wind couldn’t care less about plants, pollination and, for that matter, seasonal allergies. Wind will blow no matter what!

Other plants, though, aren’t as lucky. With grains of pollen too large to be reliably distributed by wind, these species have developed all sorts of elaborate structures, things we call flowers, to attract creatures that can then help get that pollen where it needs to go.

These critters are a diverse lot that includes certain types of birds, mammals and insects. Like bar flies who are drawn to glowing neon, pollinators are attracted to plants with showy blooms, pollen and sometimes, but not always, a sweet reward known as nectar. (Bloodroot, for example, does not produce nectar. And some establishments in Kentucky do not serve beer on Sundays. But I digress.)

Nectar is nice, but the pollen holds value too. It is packed with protein and is an important food source for those many pollinating species. They come in for a snack, and maybe a drink, then move on to the next flower for more.

Thankfully, it’s a messy process. While gathering pollen at one flower, there’s a good chance those pollinators will drop some grains from the previous plant–enough to fertilize the female parts of the flower, which then triggers the process of seed production and the propagation of the species.

To circle back to the topic that started all this pollination prattle, buzz pollination is a particular process that occurs when a bee-bumble, carpenter, sweat and several others-lands on a flower, then uses its flight muscles to vibrate its thorax rather than to fly. It’s a mighty feat that produces a buzzing sound as well as considerable force. In fact the bee needs to hold on tight with its mandibles or it will fall. The muscles contract at a rate of hundreds of times per second and the bee is showered in pollen.

In some bee species, the pollen gets packed away into special structures on the hind legs called corbiculae that basically are baskets for carrying the grains back to the nest. In others, the pollen just sticks to the setae, or hairs, that cover the bee’s body and are later removed by grooming.

Where buzz pollination gets even more amazing is the fact that some flowers cannot get pollinated unless they get buzzed. Their anthers, or male parts, hold the pollen inside little tubes, each with a teensy pore at the tip. Imagine the holes on a pepper shaker, only really, really tiny. The anthers need to get shaken, hard, for the pollen to be released.

It’s estimated that 8% of the world’s plant species require buzz pollination. Blueberries and cranberries belong to this group, as do tomatoes, potatoes and eggplants. Azaleas and rhodendrons need to get buzzed, and so do certain legumes like partridge pea, a beautiful wildflower found in various Kane County prairies.

You know what else is really interesting? Honeybees don’t buzz pollinate. Whether they can’t or just never developed the skill I’m not sure. But I do know it’s one more reason to welcome native pollinators into your yard.

Just the other day I was out in my garden pulling a few weeds and inspecting the progress of the cabbage, Brussels sprouts, cucumbers and, yep, tomatoes. Little fruits are starting to form, so clearly I’ve gotten buzzed. If you garden, I hope the same for you!