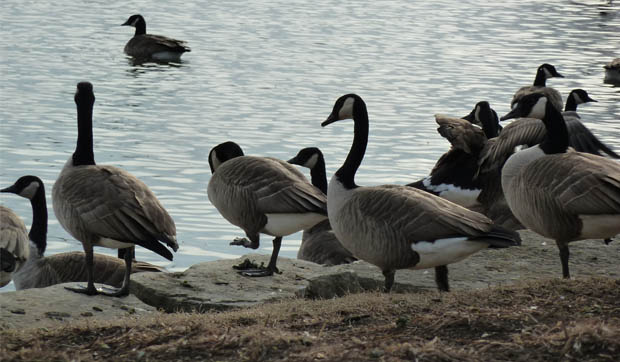 Photo Caption: After a day of “dating,” Canada geese head back to the safety of open water for the night.

Remember when Canada geese were a fly-by-night group?

Back then, before our resident goose populations took hold, it was big news when these large, majestic birds blew into town. Flying in V-formation, honking and squawking, they’d land by the hundreds on rivers and ponds. People, myself included, would go out of their way to take in the spectacle of what were then considered “rare birds.”

But you had to hurry. The Geese, as we called them, never stayed around long. They were in traveling mode, either north to their nesting grounds or south to their winter range, and our area was a mere stopover as they made their way along their migration routes.

Boy, how times have changed. Thanks to a one-two punch of non-migratory “giant” Canada geese (Branta canadensis maxima) being introduced to the area, along with landscape modifications that have produced year-round sources of food and open water, these birds are anything but rare.  Today, instead of moving toward a group of Canada geese, people tend to move away, quickly, dodging both the animals and the ample evidence they leave behind.

But if you’re one of the few folks who still find Canada geese fascinating, now’s a great time to pay a visit to a local pond or riverside park. There’s a lot going on in Gooseland. For one, migrating flocks are heading back north. If you’re not sure whether the geese you’re watching are migratory or residents, move around just a little bit. Migrating geese are much warier than our non-migrating birds and will take off at, literally, the drop of a hat.

If you’re lucky, you might even catch a glimpse of a goose sporting a neck collar. Neck collars designate birds that are being tracked as part of assorted research projects. The collars come in many colors and usually are printed with three or four characters, depending on the research and the Canada goose subspecies involved. (That’s right, not all Canada geese are the same. More than 10 subspecies have been identified.  In fact, the four smallest forms have been split off into a completely different species known as the Cackling Goose, Branta hutchinsii.)

But even our resident Canada geese, common as they might seem, can provide plenty of entertainment. This is the time of year when geese transition between winter “surviving” mode and springtime “thriving” mode. Though the birds still prefer the safety of open water and their flockmates during the overnight hours, during the daytime you’ll see it’s a whole different story. Bonded pairs are renewing their acquaintances and young geese are pairing off for the first time. It’s The Dating Game, B. canadensis style.

I suppose the scientific term for their behavior is courtship, but I can’t help but anthropomorphize – that is, apply human traits to non-human creatures – as I watch pairs strolling along local park paths and bike trails.

This past week, we’ve had the pleasure of watching a pair of Canada geese break away from the flock to enjoy quiet interludes in the athletic fields near Hickory Knolls. They’ve left their biodegradable marks, for sure, but also have enriched our daily bird watching with their devoted behavior toward one another.

The male goose, larger than his female companion, typically walks somewhat behind his mate as they make their way around the broad, open space. As the female waddles slowly forward, the male lags behind, grabbing occasional bill-fuls of grass as he keeps a watchful eye for potential threats.

Dining at Chez Soccer Field might last a few minutes or several, depending on the quality and quantity of offerings, as well as how safe the male deems the area. Then it’s on to the next course, picking through leaf litter, followed by drinks back at the retention pond.

Canada goose dating is a prelude to, of course, Canada goose mating, which normally would already be underway but, with this year’s lingering cold, may be delayed another week or two.

Sooner rather than later though, Mom Goose will be on the lookout for a suitable location for nesting. Although most geese prefer secluded locations, individuals that are used to humans may opt for seemingly unnatural sites like parking lot islands or garden beds. The flower boxes on St. Charles’ Illinois Street bridge, for instance, are perennial goose favorites, likely due to their proximity to water as well as their relative isolation from predators.

Once settled, the female will begin the process of laying eggs, one a day, until her clutch is complete. Only after the last egg is laid does she begin incubating; that way, she ensures the young will all hatch within a few hours of each other. Incubation lasts about four weeks, so this year we can count on seeing Canada goose families, each complete with mom, dad and a gaggle of goslings, sometime in late April or early May.

Even though Canada geese are ubiquitous throughout our Tri-Cities landscapes, they can still put on quite a show, if you know what to look for. Don’t be silly. Go out and take a gander.