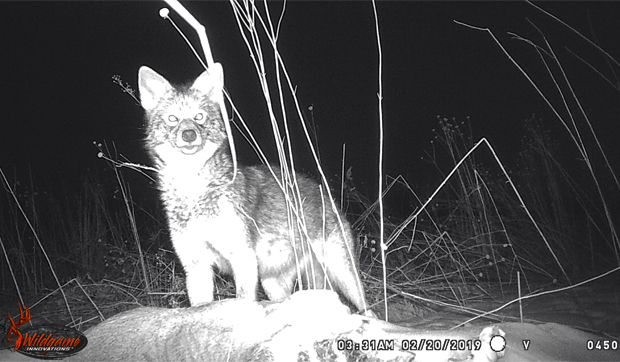 Photo Caption: After several days of little activity out in the prairie, coyotes became frequent visitors to the Carcass Cam Cafe.

Last week we took a Good Natured look at the notion of dreams coming true, and how the aspirations of naturalists might veer a little off from what most people would consider usual. While much of polite society may dream of fame or fortune, us nature folk have slightly different visions dancing in our heads.

So let’s pick up where we left off: two naturalists’ quest for a roadkill deer and interpretive exhibit called Carcass Cam.

The date was Thursday, February 14. Valentine’s Day. Virtually everyone I’d encountered that day was wearing red and eating chocolate. Even the agenda of a meeting I’d attended that morning bore heart-shaped stickers next to the title.

But instead of candy or flowers, the gift that arrived that day was furry and brown and quite dead. A young white-tailed buck made a poor decision crossing a local roadway, and my friend Valerie, a fellow nature programs manager, had found it on her way to work.

Now, a dead deer isn’t exactly the sort of Valentine you wrap up and tie with a bow.  Nope. It definitely requires special handling.

Thankfully Valerie, an accomplished outdoorsperson, knew exactly what to do.  Speed, she realized, was of the essence, as dead deer are a hot commodity among wildlife in winter.

She gathered the gear we’d need to make our dream come true, then called me; I recruited Ryan, a naturalist coworker with a strong back and passion for learning; and within the hour we went to work.

Wearing leather work gloves, we re-positioned the deer to enable a better angle for picture taking. Next, we placed a white plastic bucket, which blended in well in the white snow, about three feet away and filled it with more snow to keep it weighted down. Ryan and I gathered dry stems of monarda, goldenrod and other plants to further aid the camouflage, and Valerie strapped the camera to the bucket. Voila! Carcass Cam had come to be!

We took a moment to admire our handiwork, and then Valerie produced her piece de resistance, a crow call, and gave a few lusty caws. Almost immediately the crows responded, first with distant caws of their own and then by gathering in a nearby tree line. They even sent a scout over to check out the scene.

Valerie, Ryan and I could barely contain our excitement. A fresh deer, scavengers waiting in the wings, a trail cam poised to capture the action. We couldn’t wait to see what the camera would reveal!

And then… nothing. Well, not exactly nothing, but certainly not what we’d hoped for. Valerie’s first download of photos revealed a whole lot of images of the deer, and the grass around it. Wind-which we’ve had a lot of lately-was blowing the plant stems around. Their movement kept triggering the camera’s motion-activated shutter. And while it was cool to see that our little setup worked for  recording activity, the thrill of seeing the same shot over and over–and over!–again quickly grew old.

Valerie went out and made a few adjustments to the settings and set the camera back up.  It snapped fewer photos but still was quite sensitive to movement. Which was a good thing! Because our first visitor (well, beyond the one deer that stopped to sniff) was tiny. And most unexpected.

At 1:35am on the morning of February 15, a northern short-tailed shrew appeared in front of the carcass. It poked around the way shrews do before going on its shrewd way.

In the ensuing days more animals came to check out the unusual deer-n-bucket feature that had appeared on the prairie. Interestingly, a number of deer chose to graze quite close to their fallen comrade. And during the day we saw crows and red-tailed hawks circling though not landing.

It was actually a full five days later before the real action began. On February 20, at 3:31am, the first coyote arrived. S/he posed nicely for a photo, then looked around cautiously, perhaps uncertain of the scent of leather gloves and plastic that no doubt lingered in the area. Then the feeding began. Repeated visits occurred for the next two hours, even as ice and sleet began to fall, and by morning a significant portion of what would be labeled brisket in a butcher shop had disappeared.

I wish I could provide a more comprehensive list of visitors to the Carcass Cam Cafe, but another round of bad weather swept in and we had to bring the Cam part back inside. Still, we felt our little experiment was a success, and are eager to try again, hopefully sooner rather than later.

I suppose I should wrap up by saying that neither Valerie nor Ryan nor I have a fascination with death or gore. Nor are we heartless ogres celebrating the loss of life for our own gain. Throughout our entire carcass adventure we viewed the proceedings with a sort of awe. Yes an animal died, but we also got to see other animals survive because of that one white-tailed calamity. We sought, and were granted, a greater understanding of the connections within the wild community that surrounds us.

And that is the stuff naturalists’ dreams are made of.