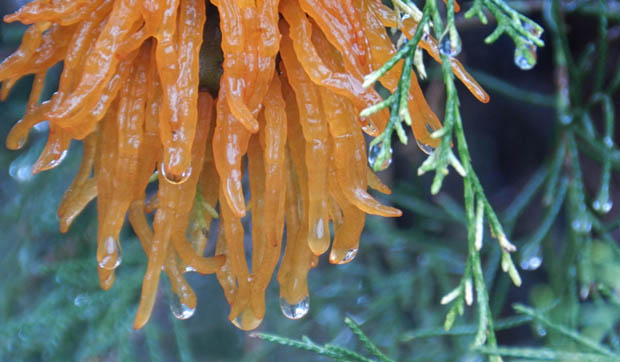 Photo Caption: Those blaze orange, oozy and gelatinous growths on cedar trees are perhaps the most obvious phase in the fascinating life cycle of cedar-apple fungus. (Photo credit: pippalou at MorgueFile.com)

Regardless of how long you live somewhere, or how well you think you know your surroundings, you’re one day bound to come across something you’ve never seen before.

It might be a migratory bird that got blown off course and landed in your yard. It could be a critter with a touch of albinism-white fur or feathers-or melanism-dark fur or feathers. You could luck into a pile of grubs chewing away at a rotted tree stump, or a mess of snakes emerging from their hibernaculum.

But if I were to go back through all the Good Natured emails we’ve received over the years, the ones with the remarkable “What IS this?” phrase in the subject line, I’d say a majority of them pertain to some sort of fungus.

At this time of year, if we get an email inquiring about a weirdly shaped, bright orange growths appearing on, of all places, cedar trees, we know it’s once again cedar-apple fungus season.

I happen to have a cedar tree in my front yard. And frankly, other when the cedar waxwings swoop in, I rarely give it a thought. Its sturdy limbs don’t break off during storms, its dark green fronds provide shelter for many bird species and its blue fruits provide sustenance for not only waxwings but also chickadees, robins and all sorts of other critters.

But lately I can’t help but notice that my cedar, normally so understated, is calling attention to itself. Its dark-green foliage is tipped, on certain branches, with brightly colored gelatinous growths-the Juniperus equivalent of blaze-orange hunting garb–waving in the breeze.

The organism at the root, so to speak, of this phenomenon is Gymnosporangium juniperi-virginianae, a fascinating though somewhat detrimental fungus that actually needs two different tree species in order to reproduce. Its spores transport themselves between eastern red cedars, Juniperus virginiana, and any number of species in the Malus genus, which includes most apple and crabapple species.

This reliance on two tree species makes for a fairly complex life cycle. Round galls, up to an inch in diameter and marked with circular depressions, form on cedar branches. At the center of each depression is a little bump which, when spring rains come, burst forth into the orange projections we’re seeing now. These structures produce the spores that the wind then carries to apple and crabapple trees in the vicinity.

On the apple tree side of the cycle, things take a turn for the ugly. Yellow spots appear on leaves in late spring; these then turn orange-ish red and may display concentric circles of color. Later on, black spots appear on the orange spots. Then, in late summer, the leaves sprout tube-like structures on their undersides. Spores develop and are then carried by wind back to the cedar trees; galls form, and the cycle starts anew.

I’d mentioned that this fungus can be detrimental. It is indeed a problem with apple trees and can ruin a commercial orchard’s production if non-resistant cultivars are planted and the cycle is allowed to persist.

As for my cedar, and others similarly affected, the best way to stop the cycle is to clip off the galls and dispose of them, either in plastic bags or by burial at least a foot deep. If you are on the apple end of the life cycle, fungicides as well as the aforementioned rust-resistant cultivars are available.

I will miss the bright-orange fungus, for sure. Its splash of color made my cedar look downright dapper these past few days. But for the good of the apple trees, and apple lovers, in the neighborhood, I know the growths have to go.

They may be gone, but not soon forgotten. Now it’s on to the next What Is This email…