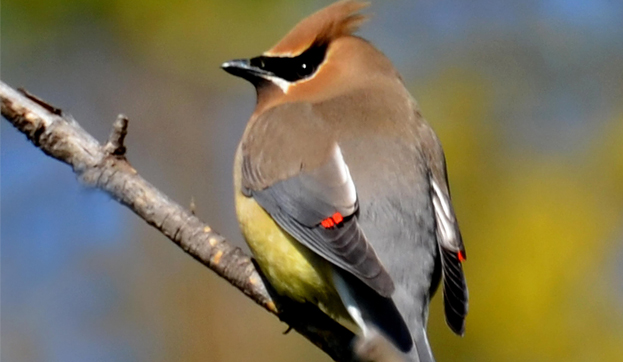 Photo Caption: Named for their propensity for eating cedar berries (which actually are fleshy cones) as well as the wax-like red bars on their wings, cedar waxwings have another fine quality they display only in summertime.

Whether we realize it or not, we all have hidden talents – a special skill or talent we trot out from time to time to amaze and amuse ourselves and others. My college roommate Alisan, an engineer by trade, can juggle just about anything you put in front of her. My friend Lisa can read – and comprehend – really, really fast. And, not to be outdone, I can make a weird popping noise with my ears.

Our wildlife neighbors have hidden talents too. Did you know, for instance, that beavers are just as good at digging burrows as they are at building lodges and dams? Or that certain species of caterpillars are adept at flinging frass – entomology lingo for insect poop – more than three feet from where they’re perched? (It doesn’t discourage determined entomologists, but it is a great way to throw potential predators off track.)

I was reminded of animals with surprising skills again the other day while hanging out with our Pathfinders nature campers at LeRoy Oakes Forest Preserve in St. Charles. We’d noticed some mayflies earlier in our walk, so it wasn’t a complete surprise to see birds-at least a dozen and maybe more-flitting back and forth above Ferson Creek. They were clearly catching insects on the fly, which is not an uncommon activity at this time of year. BUT…the birds were most definitely not flycatchers.

In our area we have several types of birds that noted for their ability to gulp insects in midair. We’ve got a nice variety those aforementioned flycatchers, many of which bear that description in their name but also a number that don’t, including eastern phoebes, eastern wood pewees and eastern kingbirds. Then we have the chimney swifts that patrol the skies over our downtowns and neighborhoods, and the swallows, a family that also includes purple martins.

Yet the birds we saw that day over Ferson Creek didn’t belong to any of these insectivorous clans. Nope. They were cedar waxwings.

These charming local residents are known more for their ability to eat prodigious quantities of stationary foods, namely berries, than for their aerial acrobatics. Nonetheless, there they were, feasting on the insect bounty that included those fat-filled mayflies in addition to other nutrient-dense species.

The sight of these beautiful birds displaying their hidden talent kindled a memory I’ve held for close to 20 years now, of the first time I saw cedar waxwings eating insects.

New to birding, I was standing alongside the Menominee River in the Upper Peninsula of Michigan. I was outside our family’s cabin trying out a new pair of binoculars when I noticed a group of birds flying maybe 20 feet above the water.

As I focused in, I expected to see some of those more familiar insectivores – like maybe phoebes. We’d had an eastern phoebe nest on the cabin that summer. But, darn it, the birds I was watching bore no resemblance to any bird I knew of that ate insects.

After several minutes of intense peering through the binocs, coupled with occasional bare-eyed squints, I was ready to admit defeat. But then, wonder of wonders, one of the birds came over and landed in a nearby poplar. With its rounded crest, black mask and distinctive red marks on the wings, even I could recognize that the mystery “flycatchers” were in fact cedar waxwings. Whaaaaat??

The discovery sent me scrambling for the bird behavior books where, after reading slowly since I’m not my friend Lisa, I learned that insects make up less than a third of the cedar waxwing’s diet. They are, however, added in right when the birds need them most – in summer, when nutritional demands are high.

Wings, legs and exoskeletons aside, insects are an excellent source of protein and energy-laden healthy fats. If you’re looking for a human comparison – or are considering an insect diet for yourself – 2.2 pounds of grasshoppers provides the same amount of protein as 10 hot dogs or six Big Macs (and minus the artery-clogging grease). In short, insects make a perfect food for birds coping with the stress of raising a family – and for the growing family members themselves.

(Just as an aside – hummingbirds have a similar flair for catching bugs on the fly. Though they’re known for sipping nectar, hummers catch their share of flies, mosquitoes and small moths during their summer stays here. If you’ve got hummingbirds near you and you see them darting from a perch into midair and back again, they’re nabbing gnats and other bugs to up their nutrient intake.)

If you happen to find yourself in a particularly bug-rich area this weekend – and thankfully we have plenty right now, especially near water – take a look above and see if you notice any birds catching insects. You may find you have a hidden talent … for identifying cedar waxwings.

In case you missed it…Good Natured is now on Zoom! Join us Tuesdays at 8pm for a recap of the previous week’s column, as well as video and audio content on a variety of nature topics. Plus, it’s a $2 Tuesday event that benefits the education animals at the Hickory Knolls Discovery Center. Click here to register: https://stcparks.ticketleap.com/goodnatured/