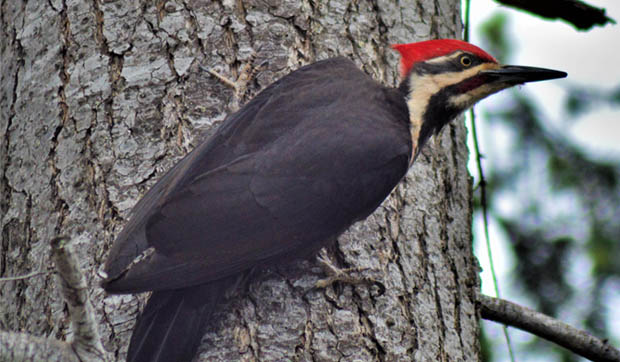 This male pileated woodpecker shows off his massive beak, which is used for excavating food as well as nest cavities from dead trees. (Photo credit: BryanHanson at MorgueFile.com)

Last week in this space we pondered the presence of the pileated woodpecker, Dryocopus pileatus, here in Kane County. Only a few years ago such musing would be considered something akin to preposterous. After all, isn’t this a bird found only in the forests of the north, south, east and northwest?

It might be time to change the range maps.

Over the past few years reports of this large (crow-sized) woodpecker have started popping up in our area, namely in the eastern part of the county as well as in neighboring Dupage. Last week I asked for folks to send in their sightings. Good Natured reader Barb Evans wrote in to say she and her husband saw a pileated at the Morton Arboretum in Lisle last fall, along the Big Rock Trail, and last Sunday, along the Heritage Trail by the Big Rock Visitor Center.

My friends Julie and Valerie, both of whom live in the general Ferson Creek area in St. Charles, said there have been sporadic sightings dating back about three years. Julie added that the bird is one of the target species for this year’s Audubon Christmas Bird Count.

Certainly the Arb, along with sites in and around LeRoy Oakes Forest Preserve, as well as where I came across the work of a pileated, at Fabyan East Forest Preserve in Geneva, are well worth closer examination. But before we all head out hell-bent on finding these big boys, and girls, it’s probably prudent to become a little more familiar with their appearance, habits and behaviors.

First and foremost is the birds’ large size. Often compared to the American crow, pileated woodpeckers measure 16 to 19 in. long and have a wingspan of up to 30 inches. The sexes are similar, both possessing a red crest, but the male’s extends all the way to the bill while the female’s forehead is grayish. Also, males and females-which are monogamous–both have a prominent black stripe across the white cheeks, but the male’s is tinged with red.

Perched on the side of a tree, the birds appear to be mostly black. But in flight, broad patches of bright white feathers on the wings are revealed. This feature, along with an undulating flight pattern, are a big help in distinguishing the birds from crows when you’re watching from a distance.

As with most birds, sound can also be a useful means of identification. Pileateds produce a range of wahs, wuks and woks that can sound like a loud chuckle-similar, but louder, than the sound of the northern flicker.

Pileated woodpeckers favor stands of large trees that contain a fair amount of dead wood. For it is within these branches and trunks that the bird’s favorite foods dwell. D. pileatus typically dine on carpenters ants supplemented by the larvae of various wood-boring beetles and, in season, caterpillars and other insects, and various nuts and berries.

The birds are listed as nonmigratory, meaning they are residents wherever they are found. This term, however, is a little misleading, as pileated do move around-especially in winter-as they search for food.

When breeding season comes, the male excavates a tree cavity over the course of three to six weeks. The female lays three to five eggs and the pair then shares in the incubation and raising of the young.

One thing that has always fascinated me about pileated woodpeckers, besides their incredible size and power, is their name. Dryocopus is taken from the Greek dryos, which means oak or tree, and koptos, which means cut or chopped. Indeed! The species name pileatus refers to the bird’s prominent crest.

But just as captivating are the bird’s many common names, most of them regional in nature. In the classic series Life Histories of Familiar North American Birds (21 volumes published between 1919 and 1968) author Arthur Cleveland Bent lists no fewer than 15 common names, including stump breaker and king-of-the-woods.

Then there’s the question of the pronunciation of the word pileated. I was in the Smoky Mountains when I first began to learn about this bird, and down there the accepted articulation is PIE-leated. Around here though most people go with PILL-leated. But since I like pie better than pills, I tend to favor the former over the latter.

Curious as to whether one version is considered “correct,” I consulted the web site of the Cornell University’s Lab of Ornithology, a vast storehouse of all things bird. There I found “Dr. Language Person’s Guide to Bird Name Pronunciations,” a humorous piece written by crow expert Kevin McGowan Ph. D. He says that both versions are acceptable and notes, “If it bothers you when people say it differently than you do, lighten up.”

The birds, after all, couldn’t care less.