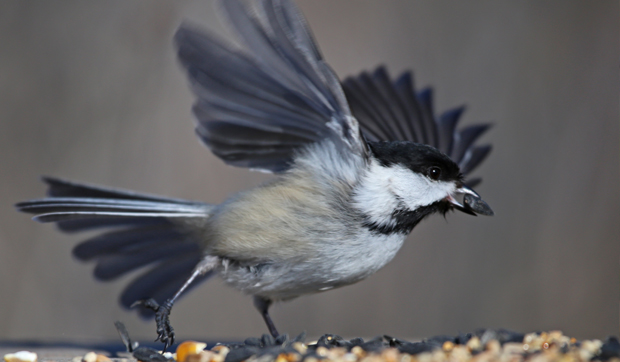 Chickadees make frequent trips to birdfeeders as they cache, or stash, the food items they’ll need to survive in winter.

Well, it happened again the other day, just as it does every year about this time: The realization that Christmas is less than a month away. A few short weeks to accomplish all the tasks I’d vowed, last year at this time, to have finished by Thanksgiving “at the latest.” And yes, I really did say that.

Seriously, where does the time go?

While I still have time to start making a list, I’m not sure I’ll have the luxury of checking it twice; I’ve got to hit the ground running. Now, if only I could remember, which Geneva shop is it that has those cute spider earrings? Where in Batavia did I spot that antique pin? And which aisle at Blue Goose has the fruitcake ingredients?

As I sit here pondering what my next move should be, one notion keeps rising above the swirl in my holiday-addled brain: This mission would be so much easier, if only I were a chickadee.

Chickadees, those black-capped wonders so prevalent at this time of year, have truly astounding spatial memory. They excel at remembering where objects are located, where events occurred and even how to navigate to and from those sites. They might not care which local stores are open late, and I’m sure they don’t give two tweets over which ones offer complimentary gift wrapping, but they sure know how to find what they need to survive, even thrive, in our harsh winter weather.

Primary amongst those needs is food – the seeds, nuts and dormant arthropods that provide needed energy. To make sure they’ve got enough to eat, chickadees employ a strategy called scatter hoarding. That is, they cache thousands of food items across the tens of acres that is their foraging territory. Then, when supplies are scarce, all the birds have to do is retrace their steps (or shall we say flaps?) to find the bits and morsels they’ve stashed away.

Now here’s where the story gets positively amazing. Rather than relying on chance to find a sunflower seed here or a peanut chip there, chickadees actually recall where they put them. It’s the avian equivalent of finding thousands of carefully placed needles in hundreds of haystacks. And to folks like me, who struggle to remember where we set down our gloves, the feat is truly astounding.

The key to the bird’s success lies in a part of its brain called the hippocampus. In chickadees, as it is with most vertebrates, the hippocampus is responsible for keeping track of spatial organization and memory. But research has shown that the chickadee hippocampus changes in size, growing by nearly 30 percent during the fall months to accommodate its increased need for recall and navigation. In spring, when food becomes more plentiful, this brain region returns to its previous dimensions.

Studies suggest that chickadees can cache as many as 100,000 food items over a year’s time and, during winter, can remember the locations of thousands of individual food items for a period of weeks and even months. It’s also been proven that the birds are returning to their own caches, not simply pecking at whatever food they happen to come across.

Further, research indicates that chickadees know when their food has been pilfered (losses of up to 20 percent a day can occur when rodents or other bird species are factored in) and will learn to avoid such “high crime” areas.

One last thing that’s great about chickadees – they’re everywhere. North American scientists have found them to be ideal research subjects because they are year-round residents, their numbers are plentiful and they have little fear of humans.

You too can observe their captivating behaviors, and you don’t have to go far to do so. Look out a window that faces a bird feeder or, better yet, bundle up and take a walk in one of our area’s great natural areas. Chances are the chickadees will be out in force, feeding, foraging and caching for the future. Don’t forget to listen for their distinctive “chicka-dee-dee-dee” alarm call-a signal that, even if you have yet to spot them, they sure as heck have seen you.

I’ll be keeping an eye, and ear, out for chickadees later today as I head out on my appointed rounds. I’m hopeful that the expedition will start shortly. But first, I need to remember where I put the car keys…