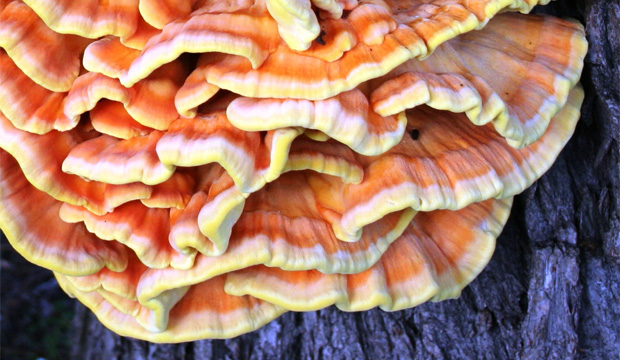 It looks like candy corn, but it tastes like chicken! Recent rains have brought a resurgence of orange-hued Laetiporus, an edible mushroom also known as chicken of the woods.

Good Natured: Chicken of the Woods

Back in the 1960s, marketers of a certain brand of tuna came up with a catchy jingle:

“Ask any mermaid you happen to see,

Chicken of the Sea.”

The white albacore tuna inside those little 5-oz. cans was so delicately flavored that it was deemed to “taste like chicken.” But as anyone with even remotely adventurous tastebuds will tell you, tuna is not the only food to earn this fowl-flavored distinction. There’s rabbit (especially farm raised); alligator; snapping turtle; bullfrog…

There’s also the Laetiporus fungi, a group of closely related mushrooms that are collectively referred to as chicken of the woods.

Thanks to our recent wet weather these fleshy orange and pinkish yellow fungi are popping up on oak trees throughout our area. While not particularly good news for the trees-Laetiporus causes heart rot, which over time destabilizes the structural heartwood-the appearance of chicken of the woods makes the hearts of mushroom hunters sing.

The mushroom’s thick, soft flesh and mild flavor are reminiscent of the white meat of, yep…chicken. And its yellow-orange color makes it hard to miss. Sliced or cubed, it can be used in place of chicken in a variety of recipes. But-and this is a pretty big but-do be aware that some people have reported adverse reactions when eating this particular sort of chicken. Cooking thoroughly seems to reduce the incidence these symptoms.

Chicken of the woods is one of a vast army of organisms we refer to as decomposers-creatures, and fungi, great and small that work to break down the dead and dying tissue of plants and animals. Laetiporus is interesting in that it can grow parasitically, on living trees, and also saprobically, on dead wood.

It’s also interesting taxonomically. A few decades ago, proper identification of chicken of the woods was easy-all were lumped under one specific name, L. sulphureus. Today though, the magic of genetic analysis has led to a splitting the one species into six separate ones, each differing slightly in growth habit and ecological niche.

The two species that occur most commonly in our area are L. sulphureus and L. cincinnatus. As members of the same genus they share certain characteristics-both have plump, fan-shaped caps and neither have stalks. They also are both polypores, which means they sport pores rather than gills on their undersides.

But sulphureus tends to be bright orange, and the pores on its underside are yellow. Cincinnatus is a little paler in pigmentation, and its pores are white. Sulphureus usually grows as overlapping shelves on the trunk or downed logs of hardwoods-typically oaks but other species too. Cincinnatus usually grows as rosettes near the base of the tree, or on its roots.

Mushroom aficionados there’s a difference in the taste too, with many preferring cincinnatus because the entire mushroom is of pleasing texture and flavor. Sulphureus tends to be tougher toward the middle, leading mushroom fanciers to cook only the outer parts.

If you should be lucky enough to find this sort of chicken in your woods, seize the opportunity to get an up-close lesson in how fungi accomplish their amazing feats of decomposition. Look beyond the mushroom’s lovely orange color and see if you can spot some white strands or “hairs.” These are the mycelia, fibers which penetrate the wood and secrete enzymes that help break down the tree.

Although the mushroom is the most visible part of the organism, it’s the mycelia that do the real work of turning wood back into soil. The mushroom is actually the fruiting body-the portion that produces the spores that, when dispersed, allow new fungi to form.

Due to their bright colors and easily recognizable growth habits, Laetiporus spp. are considered to be unmistakable. (So, in fact, is another mushroom species you might be seeing these days. The giant puffball, Calvatia gigantean, ranges in size from softball to volleyball to beachball. It too is edible when cooked, although its flavor is extremely mild.) But there’s another fungus worth mentioning, not because it looks anything like chicken of the woods, but rather because it has a very similar name.

Hen of the woods, Grifola frondosa, is another local species prized for its delicate flavor. Like chicken of the woods, it’s benefitting from recent rains. It also can be found at the base of oak trees. But it doesn’t look anything like Laetiporus; it’s grayish brown, for one thing, and its rosettes can grow much larger.

One thing that’s true of both chickens and hens-in fact all mushroom species-is that regulations for harvesting vary by agency. Most forest preserves and park districts, for example, do not allow collecting of any sort. But mushrooms can be picked in most Illinois state parks, provided the site has not been designated as a dedicated nature preserve.

As far as I know though, there’s no law against writing catchy jingles you can hum or sing to yourself as you stroll through the woods on a lovely autumn day. Here, I’ll get you started: