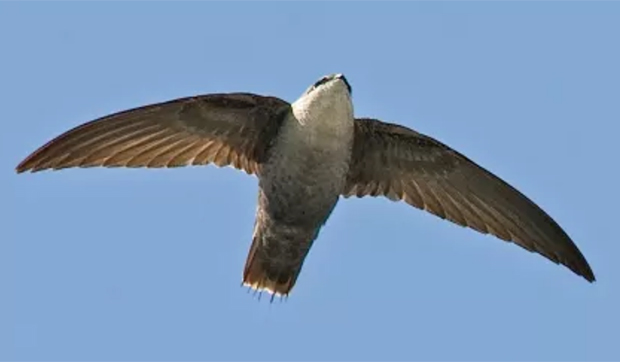 Chimney swifts swirling into chimneys at dusk used to be a common sight throughout the TriCities. But this specialized sort of habitat is disappearing, and so are chimney swifts.

Back in the time before European settlers arrived, chimney swifts ranged across the eastern half of North America, nesting and roosting in hollow trees and caves and eating insects by the billions. No records exist of how many swifts we had back then, but the thinking is that their population was limited by the number of suitable nest and roost sites.

(Unlike most other birds, chimney swifts are incapable of perching. Their short legs and strong feet instead are ideally adapted to hanging on vertical surfaces. And when you think about it, naturally occurring vertical planes just aren’t that common.)

But then a wondrous thing happened. As pioneers moved west across the newly formed United States, they started building homes. With fireplaces. And chimneys! In a relatively short period of time, geologically speaking, the swifts were presented with all manner of new nest and roost sites as towns and cities popped up throughout the landscape.

Ah, but old-style stone- or brick-and-mortar chimneys have their problems, for people anyway. They deteriorate, and are hard to clean. So as building technology progressed into the 20th Century, lined chimneys became the norm. Caps were added too, because as it turns out chimney are attractive hideaways for lots of critters besides swifts-raccoons, squirrels and bats, to name a few.

Yet lined, capped chimneys are lousy habitat for chimney swifts, and so came Strike One in terms of swift survival. Fewer suitable, accessible chimneys mean fewer chimney swifts. But that, one could argue, might be okay, as chimneys had in theory provided a somewhat artificial boost to the birds’ numbers.

Strike Two, however, was just around the corner. Chimney swifts, we mentioned, are insectivores. They eat bugs, and lots of them. But not just any insect will do. Remember, chimney swifts don’t perch; as a consequence, they spend most of their daylight hours in flight. They need to eat insects that are doing the same. In fact, more than 95% of the bird’s diet consists of flying insects.

Alas, our propensity for killing flying insects, primarily with pesticides, has greatly reduced the numbers of insects we have flying overhead. Sure, we get occasional bursts of activity, especially in river towns. Overall though, we just don’t have as many flying insects as we used to.

The one-two losses of both habitat and food source has caused chimney swift numbers to drop pretty steeply over the last several decades. As we noted last week, their population has dropped more than 70% over the last 50 years.

That sobering news may be hard to grasp, as most of our downtowns host pretty healthy numbers of chimney swifts. It doesn’t take a birding expert to spot them flying high in sky, usually in groups, chattering constantly as they chase after insects. But the nationwide decline is real.

Thankfully, the little birds-affectionately called flying cigars, for their dark, cylindrical shape-have their fans. And many of them live right here in the Fox Valley!

Since 2014, Kane County Audubon has funded the construction of seven chimney swift towers throughout the area. Swift towers essentially are substitute chimneys, but with a few advantages. They’re made out of wood, so no mortar to maintain. Their smooth siding is predator proof, and since they’re not above a fireplace they don’t grime up with smoke and soot.

Of the seven KCA towers, the one at Brunner Family Forest Preserve in Dundee has been particularly successful. Nesting swifts have used it each year since it was built and through 2018 reared 16 chicks to fledging; another four from this year’s pair are expected to fledge soon, bringing the Brunner total to 20.

Then we have the existing chimneys, many of them unused, on old buildings throughout our area. Even though many retired chimneys have been capped, and lots more have been torn down, a good number are still open. And the swifts love them! Many local chimneys, especially in downtown areas, are serving as overnight shelters for hundreds of swifts; these numbers will swell into the thousands as fall migration gets underway and swifts from the north stop by on their journey south.

Hundreds of birds swirling into a chimney at dusk is a sight to behold. So is the sight of dozens of swift fanciers gathering to watch the spectacle unfold. If you’d like to take part in such an event, KCA is here to help. According to Marion Miller, who along with her husband Rich spearhead KCA’s chimney swift outreach programs (and received the Illinois Audubon Volunteer of the Year Award for their efforts) the group will be hosting two “swift sits” this fall, with dates yet to be determined, as well as participating in the national A Swift Night Out census project on September 13, 14 and 15.

More information can be found on the KCA website, kanecountyaudubon.org; the Millers’ Facebook page, Chimney Swifts over the Fox Valley and Beyond, or by emailing Marion at MySwiftHelp@gmail.com.