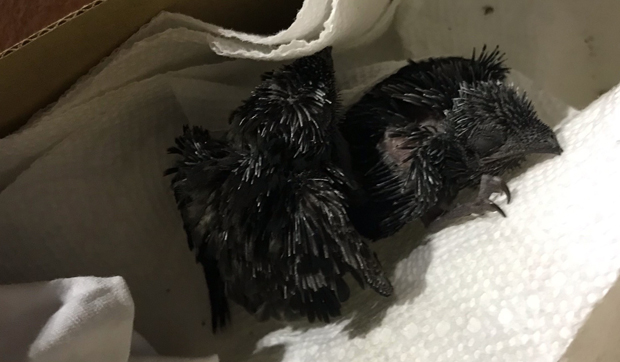 Photo Caption: This young chimney swift, a local species of conservation concern, was found with its nest mate at the bottom of a Campton Hills chimney. Photo courtesy of Cathy Martens.

The other night around 8:30 my phone started blowing up with texts that, at that moment, were going to have to go unanswered.

I was in the car with my 88-year-old mother, driving back from an afternoon of celebrating Cousin Ruthie’s 98th birthday. As we rode along we mused as to what all the commotion was about. Mom thought maybe it was someone from the party letting us know we’d forgotten something, but a quick scan of the car showed my purse as well as her cane, the only things (besides Ruthie’s card) we’d brought with us.

I was thinking it was something more along the lines of a group text, where a whole bunch of people comment simultaneously and/or express themselves with an emoji. Turns out we both were wrong.

The messages, and the voicemail that followed, were from my good friend and longtime Hickory Knolls volunteer Cathy Martens. Though she’d recently moved to Virginia, she was back for a long weekend and staying with friends in Campton Hills.

A true nature lover, Cathy has a knack for finding extraordinary wildlife. Or maybe they have a knack for finding her. Over the years she’s had red-breasted nuthatches at her birdfeeders, Argiope spiderlings in her garden, a monarch chrysalis on a bicycle in her garage and, most memorably, a white-tailed deer doe that sought the peaceful sanctuary of Cathy’s yard to lay down and die. (The takeaway from that latter experience: Dead deer on private property cost a lot, like $500, to remove.)

After I pulled into Mom’s driveway and put the car in park, I finally was able to take a look at what the messages said.

“I’m at my friend’s house and there is a baby bird that fell down the chimney into their house,” stated text No. 1. Nos. 2, 3 and 4 read, “Where can I take it?!? Don’t know if it’s a swift or starlings. There actually are two” and, instead of punctuation, ended with a very sad emoji–the one where the eyes are closed and the mouth droops nearly to the chin.

Texts 5 through 9 noted that the birds had likely been in the chimney all day, were probably dehydrated and could be near death. Most important, Cathy included a photo as well as a request for a phone number-that of Marion Miller, a local nurse and member of Kane County Audubon who, with her husband Rich, are our area’s chimney swift gurus. I texted Cathy Marion’s number, and Marion was quickly able to confirm the birds were indeed swifts. Chimney swifts! A species whose numbers have declined more than 70% over the past 50 years. Wow!

After getting Mom back home and situated for the night I was able to call Cathy and get some more details. She said her daughter had heard the birds chirping earlier in the day, thus the realization that they’d been out of the nest for a long time. And their situation was made even more dire by the fact they had fallen right next to the fireplace’s gas pilot light.

We both thought that getting some sort of hydration and nourishment would be good for the little nestlings. But that my friends was where we were so very wrong.

Marion put Cathy in touch with Dawn Keller, who runs Flint Creek Wildlife Rehabilitation in Barrington. Dawn told Cathy to not give the babies either food or water and underscored her instructions with the statistic that 90% of rescued birds fed by the public die, and 90% not fed by the public survive. Instead, she said, put the babies someplace dark and warm and get them to a federally permitted wildlife rehabber first thing the next morning.

Thankfully, the young swifts survived the night and when 8 a.m. came, Cathy delivered them to the rehab experts at the Fox Valley Wildlife Center in Elburn. When the birds fledge – that is, reach the stage where they are able to fly-Marion will coordinate their release into an established swift colony so that they birds will be in good company as they begin the next phase of their life:  a long distance migration to the upper Amazon basin, where they will overwinter in either Ecuador, Peru, Chile or Brazil.

As Marion later said, sometimes helping wildlife takes a village. And in the case of chimney swifts, that help is desperately needed. This remarkable bird-also known as the flying cigar, for its cylindrical shape-lives its life on the wing, feeding on insects from dawn until dusk. It doesn’t perch, in fact it can’t perch, due to its leg structure, and must instead hang from rough, vertical surfaces…like those found in hollow trees and old, uncapped, unlined chimneys.

But hollow trees and uncapped, unlined chimneys are rare today, as are insects untainted by pesticides. These two factors have led to the swifts’ steep drop in numbers, and to people like Marion and Rich starting regional chimney swift conservation efforts.

You can learn more about this important work by visiting Chimney Swifts over the Fox Valley and Beyond, the Facebook page Marion moderates. Or better yet, come to a Kane County Audubon meeting-call me or email for more info about this group, which meets at Hickory Knolls in St. Charles September through May.

In the meantime, you can learn more about the birds themselves by heading to any one of our area’s riverfront downtowns, and looking up. Those dark birds flying overhead, chattering endlessly and gobbling river bugs by the millions? Those are chimney swifts. And they are awesome.